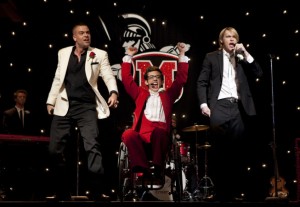 GLEE seems to have gotten off the preachy wagon and somewhat more on track with this week’s episode “Prom Queen”.  Of course since there are lots of gay themes this week, conservative America led by the sow of the decade Victoria Jackson will consider this episode part of the dreaded “Gay Agenda”. Incidentally, if I could figure out what the “Gay Agenda” is  I would  figure out how I can make money from it! Actually this is an episode with a really nice message of acceptance at its core.

So let’s just get the elephant out of the closet and into the room where it belongs right up front with this review. Kurt (Chris Colfer) is crowned the prom queen of his school as a sort of hateful cruel joke towards his sexuality. Of course, he overcomes the shame and hurt feelings that this act was supposed to inspire and instead takes the crown, makes a witty remark, and dances with his boyfriend to Santana (Naya Rivera) and Mercedes (Amber Riley) covering ABBA’s “Dancing Queen.” It is a nice added element to Kurt’s journey, and the message of tolerance and progress  is something that the far right  needs to hear. If they don’t want to hear it, switch channels and stop bitching!

So yes, this is the prom episode where high school careers are made or broken and anything is up for grabs. Rachel (Lea Michele) and her returning boyfriend from last season, Jesse St. James (Jonathan Groff) share a duet version of Adele’s “Rolling in the Deep”, which is OK, but really suffers without the amazing vocals of the original artist. The GLEE version just sounds strained and more like a battle instead of a duet. Jesse has aged dramatically since we saw him last, and he clearly doesn’t look even close to the age of the rest of the “teens” on the show. Again, I think he was just brought back to create more tension and drama in the Rachel, Finn (Cory Monteith), and Quinn (Dianna Agron) love triangle. I’m pretty sure Jesse was there just to goad Finn into fighting him, so that he was out of the prom king running.

Speaking of that particular situation it seems the writers have changed Quinn’s character even more in to a self-absorbed bitch as she screams to Finn that he’s ruined everything when he gets hauled off by Sue Sylvester (Jane Lynch) and then gives Rachel a great whopping smack across the face in the bathroom.

Rachel covers “Jar of Hearts” by Christina Perri and actually sounds amazing, but then again power ballads are kind of her trademark. The only thing about that song in this episode is it was used as the slow dance song at prom, and the song is actually about betrayal – so it was a bit of an odd choice, even though it really fit the story well.

Artie (Kevin McHale) does a really sweet cover of Stevie Wonder’s “Isn’t She Lovely” in an attempt to get Brittany (Heather Morris) back, but she’s still stinging from him calling her stupid so the attempt falls flat. Then poor Artie ends up in the clutches of Sue Sylvester for attempting to spike the punch at prom. Now let’s take a step back for a moment. There are a LOT of far-fetched scenes they have put Sue in, but a scene with her prepared to physically torture a student, much less a student in a wheelchair – what the hell are the writers thinking?

The other two prom songs in the episode are covers of Rebecca Black’s “Friday” which actually comes off as a fun danceable song (strangely, it’s better than the original), and Black Kids’ “I’m not Gonna Teach Your Boyfriend How to Dance with You.” “Dance with You” was fun and as always Blaine (Darren Criss) has a fantastic voice, but the song seemed a wee bit thin for his voice, and it wasn’t the usual swoon that he creates in practically every other number.

This was a pretty solid episode, with the cast rotating through with several different stories touched on in one quick hour. It takes a lot to balance an ensemble this big, but this week GLEE pulled it off.