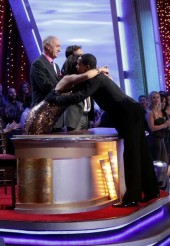 DANCING WITH THE STARS Recap: Romeo bids adieu to DWTS

Even with an injury, Ralph Macchio is saved as Romeo goes off into the void as the seventh person voted off

It’s a DANCING WITH THE STARS miracle! Ralph Macchio is saved while Romeo is cut loose from DWTS. In the biggest shocker since Petra Nemcova got the heave ho a few weeks back, Romeo ends his run (with his partner Chelsie Hightower) on Season 12 of DWTS and places fifth in the competition. The fans have spoken and they want Macchio in the semi-finals, along with Kirstie Alley, Chelsea Kane and Hines Ward.

The results show week eight brought Alley the encore, which scored her that coveted first “10”. Her encore may actually have been even better than her Monday night performance, too bad though, no judges’ scores for this one. Right off the bat Ward and Alley were relieved to find out that they in fact had made it to the semi-finals. Poor Romeo, Macchio and Kane had to wait almost the entire hour to find out whether they were “in” or “out”.

In between their suffering, ex-DWTS castmate Michael Bolton performed with Delta Goodrem who also stepped up later and did a solo of “Natural Woman”. Worldwide sensation Adele also sang her hit “Rolling in the Deep” while feeling under the weather – but the show must go on. Just ask Macchio, who knew that if he didn’t perform last night he was out of the show for good. His only chance of continuing on was to dance, regardless of how bad he ached or how bad his routine would turn out because of his pain. That endurance got him to the semi-finals and maybe even beyond.

Four remain: Macchio, Alley, Kane and Ward. Next week is the semi-finals. All four still have a great shot at the title of Season 12 champ. Just two weeks left – here we go onto week nine. Stay Tuned!