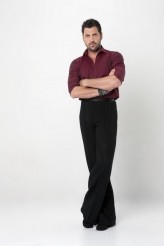 DWTS gets theatrical with numbers from JERSEY BOYS, SPAMALOT, GREASE and more 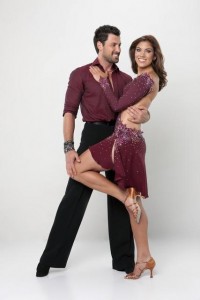 It’s Broadway week on DANCING WITH THE STARS and oh, how the drama came to life on stage and off. Famous theatrical numbers accompanied the Cha Cha Cha, the Foxtrot, the Rumba, the Tango and the Quickstep tonight for the couples. JERSEY BOY, SPAMALOT, GREASE, GUYS & DOLLS, and THE PHANTOM OF THE OPERA were some of the Broadway hits musically pilfered tonight for the dynamic duos. But the drama didn’t stop once the band stopped playing.

Pro Maksim Chmerkovskiy got into it with the judges while defending his and his partner’s routine. Still, the night was a hit, but Hope Solo was not. Chmerkovskiy’s partner – who on camera complained about continually getting three “8s” from the judges – didn’t have to worry tonight she didn’t get three “8s”. She got two 7s and a 6! Ouch! Chaz Bono, too, didn’t up his game this week. After riding high with two weeks straight of three “7s”, this week he went backwards, plummeting to a much less impressive 19 total. Tying for first were favorites J.R. Martinez & Karina Smirnoff and Ricki Lake & Derek Hough with 29.

Fun, without the judges’ harsh criticism was the group dance, which is always an audience favorite. All seemed relaxed, confident and thrilled to be there. Camaraderie abound, the seven couples enjoyed each other and rejoiced in their good time together. But, frills aside, business is getting serious now on DWTS and the judges want it known. Their comments were sometimes brutal, telling most couples that it’s time to step it up and there is no excuse for sloppy technique and lack of effort. The time is now to shine or go home. Just like last Spring with Ralph Macchio, the judges get testy with those whom they feel don’t belong in the competition any more. And, they make it known!

Rob Kardashian (reality star) and his partner Cheryl Burke
He did a good job but not better than last week – too stiff. Len Goodman thought Kardashian had good timing and precision. Bruno Tonioli told him he had to be in charge in the Cha Cha Cha. Carrie Ann Inaba praised the charisma that he finally showed.
Inaba – 8, Goodman – 7, Tonioli – 7, Harland – 7

Nancy Grace (TV host) and her partner Tristan Macmanus
I am sorry but she is just so bitchy in rehearsals it’s very hard to discern who she is and what she does with her dancing. Still, her Foxtrot was fine. Goodman said she showed more personality. Inaba thought she was a showstopper tonight. Tonioli called her Nancy-Dance-A lot.
Inaba – 9, Goodman – 7, Tonioli – 8, Harland – 7

David Arquette (actor) and his partner Kym Johnson
He is just so adorable on the dance floor. He tries so hard to do well and it shows. Inaba came down hard telling him he was out of sync in his Foxtrot. Tonioli said Arquette was a live wire. Goodman called the routine a bit rough around the edges.
Inaba – 8, Goodman – 7, Tonioli – 8, Harland – 8

Hope Solo (Soccer Olympian) and her partner Maksim Chmerkovskiy
She was much too heavy footed. Goodman was annoyed – telling her the Rumba was her worst dance yet. Inaba thought the dance was forced. Tonioli said it didn’t gel.
Inaba – 7, Goodman – 6, Tonioli – 7, Harland – 7

J.R. Martinez (U.S. veteran/actor) and his partner Karina Smirnoff
He is the most gifted and naturally talented of the celebs this season and he keeps proving that over and over again. Goodman said in a word – fabulous! Inaba told him Bob Fosse would be proud. Tonioli thought his Quickstep was a hit.
Inaba – 10, Goodman – 9, Tonioli – 10, Harland – 9

Ricki Lake (TV host/actress) and her partner Derek Hough
She was good and definitely better than last week but she lacks excitement in her dancing. Goodman said she proved her talent in her Quickstep. Tonioli thought the dance had impeccable style to it. Inaba said it was very exciting to watch.
Inaba – 10, Goodman – 9, Tonioli – 10, Harland – 8

Chaz Bono (activist) and his partner Lacey Schwimmer
He really used the dance floor, but was it in the right way, not sure. Goodman was disappointed; saying it didn’t suit him. Inaba wanted to see more content. Tonioli, agreeing with Goodman, said it wasn’t a right fit.
Inaba – 7, Goodman – 6, Tonioli – 6, Harland – 7

Who will go home? There’s a good chance Solo will be kicked right off the floor. If not, it’s got to be Bono’s time. Stay tuned.

UPDATE: Click on link for who was eliminated in Week 6