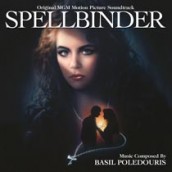 Though Basil Poledouris was better known in the 1980’s for the uber-heroic orchestral damage of such scores as CONAN, RED DAWN and ROBOCOP, some of the late composer’s most creative scores were being done for synths, from the wildly percussive car chases of NO MAN’S LAND to the eerie sci-fi western stylings of the HARLEY DAVIDSON AND THE MARLBORO MAN.

If there’s one electro-centric score of Poledouris’ that truly held hypnotically evil sway, then it would be 1987’s SPELLBINDER. This little-seen, but very effective chiller cast TOP GUN’s Rick Rossovich as the hunk who falls bad for uncanny hottie Kelly Preston. But then, what red-blooded straight guy wouldn’t, even when confronted with a witch coven conspiracy that’s hot on her tail?

It’s this pull of dangerous, intoxicating sensuality that fills Poledouris’ score, one whose chiming theme, gurgling sound design and chest-piercing melodic sustains are part and parcel of the ’80’s classic wave of keyboard-enhanced genre scores, one that included the likes of A NIGHTMARE ON ELM STREET and DREAMSCAPE. For Poledouris, it’s a unique opportunity to throw himself into the kind of haunting weirdness that betrays very little of his telltale knack for muscular themes.

SPELLBINDER does its titular trick, with waves of uncanny atmospheres and dangerous pulsing, with all musical roads leading to a memorably nihilistic climax that once again proves not to let looks fool you, even when a composer’s bewitching aura makes a supernatural femme fatale impossible to resist.