Exclusive Interview: Stefanie Powers put the girl power in THE GIRL FROM U.N.C.L.E. 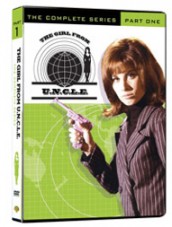 ©Warner Bros.
Stefanie Powers is THE GIRL FROM U.N.C.L.E.
Interviews

Exclusive Interview: Stefanie Powers put the girl power in THE GIRL FROM U.N.C.L.E. 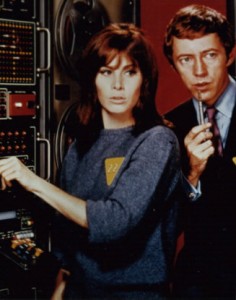 Stefanie Powers was THE GIRL FROM U.N.C.L.E. | ©Warner Bros.

While everyone fondly remembers the Robert Vaughn series THE MAN FROM U.N.C.L.E., many forget a one-season spin-off starring Stefanie Powers landed on the air in 1967.

Called THE GIRL FROM U.N.C.L.E. the series followed Powers as April Dancer – a spy who worked for the United Network Command for Law and Enforcement and flexed her sexy muscles to combat the bad guys. You could say she put the Powers in Girl Power.

The show only lasted for 29 episodes, but the series is looked back at very fondly by fans who fell in love with one of the first empowered female leads in a television action series.

Now, Warner Archives is releasing the complete series on a new DVD set from Warner Direct and actress Stephanie Powers (who later starred in the hit ABC series HART TO HART) spoke with ASSIGNMENT X about her involvement and why she still looks back fondly on April Dancer.

ASSIGNMENT X: Have you seen the remastered box set yet?

STEFANIE POWERS: I haven’t seen anything from those days in a long, long time. It should be amusing. There’s been quite a demand for them, interestingly enough in certain circles. I don’t know if Warner Bros. decided to respond to that demand or why they decided to put this in this format, but I’m thrilled. It will be really amusing to see what they all look like and travel back down memory lane.

AX: If this were made today, do you think the series might have been called THE WOMAN FROM U.N.C.L.E.?

POWERS: Why? Is [girl] pejorative? I never understood why that word should be pejorative, especially when young ladies go out of the house dressed like tarts, now they’re going to complain about being a “girl.” I don’t quite understand it. I never found the term pejorative. THE GIRL FROM U.N.C.L.E. is what it was. He was a man, she was a girl. 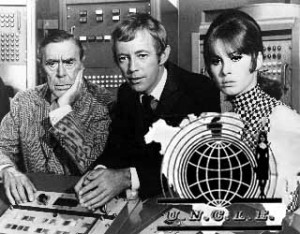 Stefanie Powers was THE GIRL FROM U.N.C.L.E. | ©Warner Bros.

AX: This was one of the first series where you had a very strong lead in an action-adventure series …

POWERS: … it was the first hour-long television series starring a woman. That you can put in your Funk & Wagnalls.

AX: Was a big deal made of it at the time?

POWERS: It wasn’t made an issue, which was quite interesting. It was never made an issue until years later when somebody said, “did you realize that’s the first time a woman starred on an hour show?” I hadn’t. It’s quite interesting, but it was the sign of the times it hadn’t been made an issue. Those are the facts. A few years ago – last year I think it was, somebody at PBS started to do a show called PIONEERS OF TELEVISION, it’s when they mentioned I was a pioneer. I didn’t know where it came from and they told me that little factoid. It was rather nice and I was pleased by it.

AX: Were you a fan of the MAN FROM U.N.C.L.E. series before you got the role?

POWERS: Yes I was. It was quite successful and a lot of fun to watch, as I recall and yes it was a happening thing at the time. 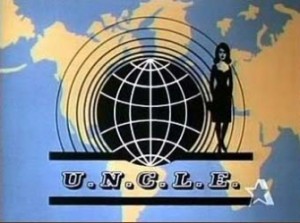 AX: Did they incorporate a lot of things from your life into the character?

POWERS: I don’t think people actively approached what my abilities were, but they did incorporate some things that I had an aptitude for such as [speaking in] different languages.

AX: Do you have any specific episodes that you really liked that you felt represented what you did best on the show?

POWERS: There are several. Obviously, the Boris Karloff episode, because he was such an icon and Peggy Lee. I remember being shot out of a giant toaster. That was a lot of fun. There are snippets, it was a long time ago. Overall, my recollection of it was highly amusing. They sort of chronicle a time we don’t see anymore – action with satirical humor.  A little bit, I suppose, it’s a different version of satire than SATURDAY NIGHT LIVE, but this was a more classical form of satire.

AX: Sort of like working with Boris Karloff in drag …

POWERS: … yes, that was very satirical. Suffice to say, it was a great privilege to work with him. As always when working with people of great talent they generally are wonderfully professional and it’s a great thing to learn from them. 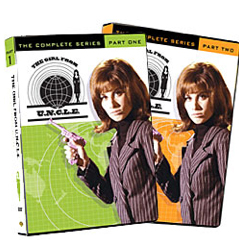 AX: Were the ratings pretty good?

POWERS: Ratings as they relate today, were very different than they are today. It was taken off the air largely because of Norman Felton, the producer of THE MAN FROM U.N.C.L.E. and THE GIRL FROM U.N.C.L.E. was unwell.  Due to his unwellness, the moment when you’re dependent on a producer to come in and fight for the show, he was unable to do that and he in fact resigned. As far as ratings are concerned, it’s very difficult to compare. When HART TO HART went off the air, we had a 38 share. You can’t possibly relate that to how ratings are today.

AX: Did you want to do more action on the show?

POWERS: I did so much action, I got hurt. They then had to make a rule that a stuntwoman had to do more of the things that were demanding.

AX: Was there ever any talk about revisiting the April Dancer character?

AX: Do you ever see yourself getting back together for one last HART TO HART?

POWERS: I think we put a period on the end of the sentence in revisiting it with the eight two-hour movies we did in the 1990s.

Click on Link: To purchase THE GIRL FROM U.N.C.L.E. DVDs