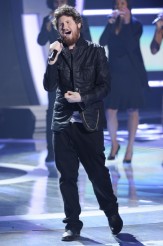 Here begins the main meat of the matter on the world’s greatest karaoke competition, AMERICAN IDOL.

Where the ones that the people voted for and the ones that judges decided to save perform for everyone’s votes. Who shined? Who stunk? And just who will be in the bottom 3 this week?

Let’s find out as we unpack the tent, unleash the big top, wash the elephant, light the rings of fire, comb the bearded lady, bring out the gimp, unveil the conjoined twins, swallow swords, get our fortune read, roam with gypsies … and get this circus started.

Lauren Alaina – Since her idol is Shania Twain she went with “Any Man of Mine” in order to show off her fun side. Bad call. Sorry, but you are no Shania Twain. Not by a long shot and singing this song that really didn’t play to any of your strengths other than to show you can be a good performer is not a smart choice. That said, she isn’t going anywhere anytime soon. The judges love her despite her continued mediocre performances and the crowd seems to as well. Now, granted the judges didn’t really like it that much either, yet, still praised her all over the place. One other thing, the whole duck-face pity parade you did at the end isn’t gonna grant you any followers, people hate that crap. Grade: C

Casey Abrams – I expect big things out of Casey during this competition because the boy can simply sing. What makes him better is that he can also perform despite the fact he isn’t your stereotypical face you usually see on IDOL. Casey sang Joe Cocker’s “A Little Help From My Friends” and blew the lid off. It was freaking great and I loved that whole bit with his “friends” coming out from either side of him. This guy can pretty much sing anything he wants. Steven said he wanted some spark from Lauren, well he got it from Casey for sure. He’s got great charisma and he’s just put himself up there as one of the front-runners. Grade: A

Ashthon Jones – Ashthon was one of the people the judges made as a wild card last week as she didn’t garner enough votes to make it. Hmmm and I wonder why. Picking a freaking song from Diana Ross that probably most people have no clue about? Really? Sure, some people know “Will You Tell Me That You Love Me” but the majority of the public? I doubt it. Why not choose something that more people know and can get behind. Diana Ross has a huge catalog of songs and you pick this? I don’t get it. Along with the pitch problems and unable to hit the high note, she may be in the bottom this week. Grade: C-

Paul McDonald – I didn’t think Paul was going to get voted in but chosen as a wild card, yet he was indeed chosen by the public. I doubt that he is going to last in the competition. I just think that he’ll appeal to some people out there but against much stronger competition, he’s not gonna cut the mustard. That brings me to Ryan Adams “Come Pick Me Up”, which he sang. First, dude Sgt. Pepper’s outfit really? Really? And second, could I be bored any more by your performance. This is your one shot and you choose this song? What the hell, man. Terrible. And the judges gave him props … did they listen to the same song I did? And J.Lo is right, I don’t think America is gonna get it either … even if she didn’t have the balls to say it that way. Grade: C-

Pia Toscano – Holy hell, did you see that freaking dress? Uh, she doesn’t have to sing, she has my vote right now. I’m sure many people out there were worried about her crossing her legs but I was impressed she had the gumption to actually wear it out there. She looked amazing. But Celine Dion … shoot me now, please. I know Celine didn’t sing “All By Myself” first but Pia did her version. While I freaking hate the song and hate Celine freaking Dion, there is no doubt that Pia has the pipes and blows it out of the park. She is amazing to listen to and amazing to look at. She’s going far. Grade: B

James Durbin – James can also wail so putting him after Pia makes sense from a logistics standpoint. His idol is Paul McCartney and he chose to sing “Maybe I’m Amazed” and it brought out a bit of a different side of James that was much more subdued and relaxed than the screaming and yelling version we have seen up until this point. And he did a good, good job and showed himself to be a pretty darn good performer (I loved that vest he was wearing as well). Again, the front runners continue to perform very well so far. Grade: B+

Haley Reinhart – Haley also was one of the surprise votes from America last week (at least in my eyes) and she definitely can sing but she may get lost in the shuffle as she isn’t flashy or has the ability to throw it full throttle. Her rendition of LeeAnn Rimes “Blue” was certainly something we haven’t seen from her before which isn’t bad but like Randy said, I kinda nodded off a few times. Nothing wrong with how it was sung and I don’t think she’ll be in danger this week but she’s gotta wow us if she hopes to stay any time in the competition. Grade: B-

Jacob Lusk – I think Jacob is also one of the front runners for sure because of his simply awesome stage presence and the fact he has an amazing control over his voice. But his idol is R. Kelly? Seriously? Didn’t he pee on some 13-year-old girl and he’s your idol? Plus, I haven’t liked “I Believe I Can Fly” since I first heard and have groaned every time I have heard it since then. Now, that said, I know some people will love the song and there was nothing at all wrong with the way he sang it as he really brought it again. I just want a better tune. Grade: B

Thia Megia – Sigh, Thia, I really had high hopes for you after I correctly picked you as one of the contestants people would vote for, but her version of “Smile” by Michael Jackson was bad. It was bad on a lot of levels. It was boring and sleepy in the beginning and then turned into some jazz lounge act from hell that made me want to either hang myself with my shoelaces or have the bartender leave the bottle so I can forget. Grade: C-

Stefano Langone – Now, Stefano was one I was expecting to make it via votes from last week, yet, didn’t. He was also saved by the judges’ wild card selection. I picked because I figured he’d garner a good portion of the tween vote but it didn’t happen (instead it maybe went to Paul?). Singing Stevie Wonder “Lately” at least was a bit of more upbeat selection considering he’s only done ballads like the entire time. But I thought itsucked. I wasn’t impressed at all but the judges seem to like it for sure. I wasn’t impressed with his one-tone throughout the song and he has zero charisma. Grade: C

Karen Rodriguez – Oh, I get it. So, we will just have a Selena song from Karen every week from now on until they start pulling Slayer Week (I wish) or something. She looked great on stage and that outfit was rocking but her version of “I Could Fall in Love” was a bit sleepy and didn’t bring anything new to the table that we haven’t heard before. It wasn’t bad but it certainly wasn’t good at all. I underestimated the Latin voting block last week and I won’t do it again as she will be here next week. Grade: C

Scotty McCreery – Well, we aren’t getting any surprises from Scotty. And Garth Brooks “The River” seems like a natural fit for the guy with the deep voice. The good news for Scotty is this: He’s the only real country singer in the competition and he is picking the right songs to appeal to his demographic. That can mean more than just how you sing or what type of performance you do. Garth is wicked popular and that’s going to appeal to people regardless of what the singing is. That said, there was nothing wrong with the singing at all! So that’s equally as good and he should be sticking around for a fairly long while. Grade: B

Naima Adedapo – I love “Umbrella” from Rihanna (especially Jody den Broeder’s Lush Remix) and this wasn’t bad either with a lot of different things in the performance including some flashy backgrounds with lightning. I thought that Naimi should have been among those chosen in the voting from last week but it is good she got another chance with the wild card as she proved she can jam if she wants. As J.Lo said, she’s got fire and that sometimes trumps just how well you sing sometimes. Grade: B

So who will be in the bottom 3 this week and who goes home? Well it would be easy to pick the three wild card contestants as they obviously didn’t garner enough votes initially to make it. However, I’m going a different direction, OK with one.

I think the bottom 3 will be: Paul McDonald, Ashthon Jones and Thia Megia. I think Paul will get a pass and will get another chance to win back tweens next week., but I do think that Thia goes home. No one likes someone to give up before the vote has even started and asking for America to give her one more chance was probably the worst thing she could have done.

Who do you think will be in the bottom 3 and who will go home?