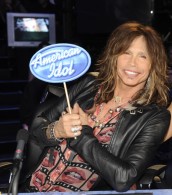 Well sports fans, we are finally to the meat of the matter on the world’s greatest karaoke competition, AMERICAN IDOL– Season 10.

Time to put up or shut up. Go big or go home. Play ball or sit on the bench. Blow the place out or go down in flames. Can I come up any other clichés? Nope, so I’ll move on.

We get the boys, er men first and given the quality we saw in the opening episodes of the show, I certainly hope they come off as good live, but as we all know pretty much everything changes when it goes live. The other thing I’m interested in is seeing how judges J.Lo and Steven Tyler do as we have yet to see them live yet. As we know, Ellen Degeneres was great during the taped portions but crashed and burned when it got live. We’ll see what happens.

Clint Jun Gamboa – The karaoke DJ has been somewhat of a standout so far this season with his odd glasses and strong voice, but he also got flak for cutting that fat kid from his group during group day. He sang “Superstitious” by Stevie Wonder. He was strong throughout the song for sure and he didn’t have any trouble hitting the hard notes and such but I’m just not sure that he’s gonna be the one that people vote for. I just don’t think he’s charming enough nor has a good enough presence to win over fans. I could be wrong but I think too many other singers are more intriguing. Grade: B+

Jovany Barreto – Unfortunately after the upbeat song from Gamboa we got Jovany, who basically brought the whole place into a state of depression. Look dude, I get it. You are a good looking guy that loves to show off his ripped chest. You don’t need to pander to the ladies anymore you are already there. If they aren’t voting for you because of your looks already you don’t need to sing Edwin McCain’s “I’ll Be” to get any more votes. Instead you probably have the entire male population watching IDOL hating you even more because you have the looks and are getting all sappy. Plus, you probably bored them to tears. I know I was. At least Randy thought it sucked too. Grade: C-

Jordan Dorsey – Here’s a guy that no way makes it to the next round no matter what he does. Why? Because in the editing of the show he came across as a pompous douchebag that only a damn fool would like. His judging of the other singers in the group day, then ultimately leaving the group he was so choosy with was the biggest d-bag moment of the season. So, I think a lot of people will not be interested in voting for him. Plus, his performance of Usher’s “OMG” just blew major ass. He couldn’t hit his high notes, he was a mess up there and just all over the place. The judges agreed and then Jordan said he didn’t want to be that type of performer. Uh, why pick that song then dumbass? Adios, douche. Grade: D

Tim Halperin – Who, honestly, may be one of the few people I actually remember from the auditions and other rounds comes out and, again, I have no idea why they choose the songs they do. Rob Thomas’ “Street Corner Symphony” didn’t showcase his voice at all. It was a muddled song that just ran together and you could barely distinguish if he was singing or just saying the words. Not a good choice at all. Pick something that shows your voice, shows you can sing and why you should be there. This wasn’t it. The judges agreed. Given I don’t remember him from the early episodes and this bad choice – he’s a long shot to make it. Grade: D+

Brett Loewenstern – He was a standout just because of his interesting look that differed from the other milquetoast singers. Dressed all in hippie garb, Loewenstern picked The Door’s “Light My Fire” which definitely suits him and is a good song to actually showcase what he can do. I would have said that he may have been one that gets lost in the shuffle, but given how badly the early contestants have been he could squeak in. This wasn’t bad at all, especially after the butchering we have received from the last three. However, middle America  may want a more manly dude up there. Grade: B+

James Durbin – Well, hello there. Now that’s what I’m talking about. Get the fans and voters just grooving with you from night freaking one. And James totally did it. I had huge expectations from James and he delivered. Singing Judas Priest’s  “You’ve Got Another Thing Coming” (which Tyler says is the first Judas Priest song ever on IDOL – he’s probably right), he knocked it out of the park. That Adam Lambert vibe is really coming on strong so hopefully he’ll continue to rock out. If he doesn’t make it to the next round, you voters are crazy. Grade: A-

Robbie Rosen – Sigh. Hard to follow up Durbin’s blockbuster, but this was really not what I would have chosen (maybe he didn’t know he was following him). We go from rocking it out and loving what was going to … sorry, I nodded off there for a second. Really, dude, “Angel” by Sarah McLachlan? No dude should be singing this song to begin with, but on the opening night where you are basically making a first impression on the voters? Bad choice, man, really, really bad choice. Nothing wrong with the way it was sung or his voice, but so freaking boring and forget about any male votes coming your way. Grade: C

Scotty McCreery – I don’t know why, but I really don’t like this guy. I mean douchbags like Jordan are one thing, this dude I have no reason to dislike him, I just do. And what’s with the freaking slow songs. But see, Scotty is strategic in his slow songs. Not only is “Letters From Home” by John Michael Montgomery extremely patriotic and will appeal to every army wife in all 50 states, but he also gets the country contingent that isn’t being represented by anyone else in the competition. That’s two things he has going for him plus his impressive deep voice. Well played, McCreery, well played indeed. Grade: B

Stefano Langone – Well, the boy can sing that’s for sure but it was a bit all over the place when he got to the high notes on Bruno Mars “Just the Way You Are.” Can’t disagree with his choice because it showed his talents as a singer, which is good. He also has a good look which will make him appealing to the female contingent, so I am thinking he will likely be one of the ones that makes it. Grade: B+

Paul McDonald – Normally, choosing Rod Stewart’s “Maggie May” would be the death knell for any contestant on IDOL. I would normally say, “Really dude, Rod Stewart?”, but this guy is quirky and totally different from everyone else in the competition. His voice is just so strangely different that it fits. I can’t explain it. Rod Stewart works with this guy. His smiling happy people attitude works for this guy. I can see him appealing to a lot of people for just those reasons. He may make it on Thursday. Grade: B

Jacob Lusk – Obviously, if you’ve read any of my prior reviews of IDOL this year you know that I think that Lusk and Durbin are potentially the two top contenders to take it all this year. Lusk just has some strange thing that turns on in his brain when he sings that makes him become mega-personality-man. It’s odd but it works. Plus, he’s got a fabulous voice and maybe more importantly crazy control of that voice. If this guy doesn’t make it into the Top-12, again, you voters are crazy. Grade: A-

Casey Abrams – Following up Lusk’s performance is rough. But Abrams is one of the early favorites as well and he showed why with “I Put a Spell on You” by Screamin’ Jay Hawkins. It was an interesting performance filled with him getting groovy and really getting into it while delivering some great vocals. Plus, he showed he can do pretty much any song whether it is holding a stand-up bass or just all alone on stage rocking out. This guy is talented for sure. Grade: B+

So that’s your Top-12 male performances? Some really rocked out and proved why they are there. Others sucked.

So who moves on? Well, I have my own opinion on who I would like to move on, but here is who I believe will be the five that move on from the voters.

Jacob Lusk – I gotta believe what we have seen from him in prior episodes and his cool controlled voice that we saw in night one will just win people over. I know the judges love him but I think the fans will want to see more of him just to see what he’ll do.

James Durbin – As with Lusk, I think fans will want to see more of him because he’ll no doubt bring something different to the party every week. And that’s a good thing for sure. Plus, there’s no denying he may have the strongest pipes in the competition that alone is worth watching more of.

Casey Abrams – I think the good camera time we got from him during the other episodes of the show combined with his ability to pretty much do whatever he wants and do it well on stage will make him a very popular contestant. He’s also not your typical singer or contestant in terms of looks, which gives people something to root for.

Scotty McCreery – The patriot in us all can’t help but cheer for his rendition of “Letters From Home” and you know all those army wives are voting their hearts out right now. Combined with the fact he’s the only pure country singer, he’s got a place here for sure.

Lastly, Stefano Langone – I think he’s got the looks and the pipes that will get him a lot of the votes from the female contingent and his Bruno Mars song in night one was pretty damn good. I think from all the pop singers on the male side he’s gonna get the lion’s share of the votes.

WHO DO YOU THINK SHOULD MAKE IT? WHO SHOULDN’T? LEAVE YOUR COMMENTS BELOW AND LET YOUR VOICE BE HEARD.