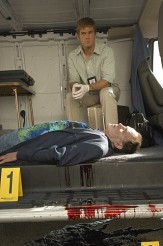 Mindful of the fact that there’s probably no increasing over the stab to the heart that was the Season Four finale, the DEXTER team go in another direction as they conclude Season Five on a bittersweet note that feels just right.

As “The Big One” opens, Dexter (Michael C. Hall) is frantically trying to find where motivational speaker/serial killer Jordan Chase (Jonny Lee Miller) took Dexter’s lover/partner in crime Lumen (Julia Stiles), who was kidnapped in last week’s episode. Meanwhile, Miami Metro Homicide has been alerted to the murder of dirty ex-cop Liddy (Peter Weller), killed by Dexter (also last week). Finally, Dexter is blindsided by the appearance on his doorstep of son Harrison, nanny Sonia (Maria Doyle Kennedy), stepchildren Astor and Cody and their paternal grandparents, who have all decided to surprise Dexter for Harrison’s first birthday. Dexter is happy to hear that Astor and Cody want to spend the summer with him, but horrified at the timing and even more appalled when he’s called out to the crime scene of Liddy’s van, all of which delay his finding Lumen.

Due to lots of circumstantial evidence, including Liddy’s blood on his shoe (it leaked out the van door, but he only notices it when it’s pointed out to him), Detective Quinn (Desmond Harrington), Deb’s (Jennifer Carpenter) partner and lover, looks guilty of killing Liddy. Since all of Quinn’s explanations would involve pointing a finger at Dexter, which would hurt Deb, he keeps mum and asks to see a lawyer.

Dexter manages to track down Jordan, who’s got Lumen tied up. There’s a scuffle, but Dexter gets the upper hand and allows Lumen to deliver the coup de grace. However, Deb has gotten a tip that leads her to the scene as well. She finds Jordan’s freshly-dead corpse tied to a table and sees two figures behind an opaque plastic curtain, though she cannot see their identities: Dexter and Lumen.

Deb demands they drop whatever is in their hands, but because she identifies strongly with “Number Thirteen,” as Deb thinks of the victim who escaped and has turned vigilante, she tells the unidentified pair behind the plastic curtain that they have an hour before the police show up. Then Deb leaves without arresting or even seeing the couple. 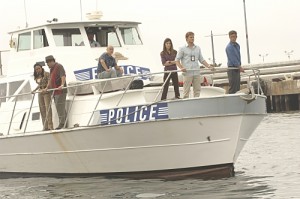 Dexter and Lumen dispose of Jordan’s body at sea. They both are radiantly happy at the time, but in the morning, Lumen tells Dexter she cannot stay. She felt herself change during a sleepless night – she no longer has “it” inside her. She is free of her darkness, but knows Dexter is not free of his. She cannot kill any longer, but knows Dexter must continue to do so. Dexter, on the verge of tears, tells Lumen he understands and that he will carry her darkness for her.

Even though she didn’t make an arrest, Deb is hailed for breaking the “barrel girls” case. It is assumed that the “disappeared” Jordan has been killed by the vigilantes. Dexter tests the blood on Quinn’s shoe. At Harrison’s birthday party, we learn that Dexter falsified the blood results, exonerating Quinn of Liddy’s murder. Deb is with Quinn, who thanks Dexter for what he did. LaGuerta and Batista make up. Astor asks Dexter if he helped his friend Lumen and Dexter says he thinks he did. As Dexter cuts Harrison’s cake, he seems at peace with himself.

Given that most viewers will have had a good guess that, one way or another, Lumen would exit the show in this episode, it’s a pleasure to see her leaving safely away rather than dead, arrested or going insane. We’ll miss Stiles’ intensity, but a second season of DEXTER with our hero as part of a pair, where his other half shares his homicidal proclivities, seems like it would be too much of a shift in tone. This is also a rare instance of the series allowing a killer other than Dexter to go not only free, but healed by the act of killing. It’s interesting that this episode was written by 24 veterans Chip Johannessen and Manny Coto – Lumen does have a bit in common with Jack Bauer at this point.

Hall is as always unimpeachable as Dexter in all his subtlety, introspection, grief and wry humor. Carpenter blazes bright as Deb. The scene the two of them have near the end, where she and Dexter talk about her letting the killers go, without Deb acknowledging what she’s talking about and Dexter unable to reveal that he knows, is superb. As for Quinn, we can only look forward to what happens next season, as he’s now greatly in Dexter’s debt, but has no reason to have his suspicions allayed as to what Deb’s brother does in his off hours.

There is a sense of clearing the decks here. Season Five has brought Dexter through the grief and guilt process in an appropriately DEXTER way, gruesome, suspenseful and strangely moving. There is resolution here, but there’s also room for plenty of harrowing events in the future. Season Six can’t come too soon.