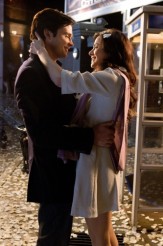 Death, destruction and a proposal make for a pretty ambitious, but occasionally underwhelming episode

One hour later after watching SMALLVILLE’s winter finale “Icarus,” and all I could think was, “what the hell?” And look, before I can continue, there’s no way to write this review without giving up spoilers, so consider yourself warned.

The episode starts with Clark (Tom Welling) proposing to Lois (Erica Durance). She accepts, heroes everywhere rejoice, and the episode seems doomed to fall into a sappy love fest with no depth. Then Oliver (Justin Hartley) gets his butt whooped while trying to protect a woman being mugged and all hell breaks loose.

Oliver is now the poster boy for vigilante violence, and Slade (Michael Hogan) is spearheading their persecution. The vigilantes, every last one of them, are forced to go into hiding. Even Watchtower is forced to shutdown Peripheral members of the team, like Lois and Tess (Cassidy Freeman) who are held for questioning by Slade’s people.

Season Ten is, of course, the last season, so SMALLVILLE has to go all out, but even I didn’t expect this. Clark seems to kill Slade, something I never thought I’d see him do, but the most shocking death is that of Carter Hall aka Hawkman (Michael Shanks). You knew it was true when the hawk on his armor went dim. 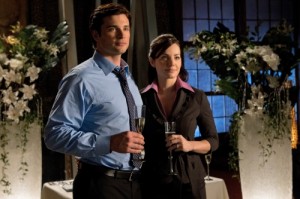 But wait, there’s more. During his very somber burial, a crystal pyramid emerges from the sand knocking everyone, including Clark unconscious. I have no idea what that thing was, but whatever it is, for it to take out everyone in that fashion, it can’t be good. Is this the famed “darkness” we’ve been hearing about all season? What was that thing?

Which leads me back to my opening statement, “What the hell?”

SMALLVILLE is certainly gearing up for something big. Each episode it seems is  more epic than the last. There’s almost too much going on, with the viewer being left in utter confusion and/or glee, depending on who you are.

SMALLVILLE’s production value, as always, leaves much to be desired. Many of the pivotal scenes lost a lot of impact due to some rather cheesy effects. Slade’s eye, for example, is about the worst piece of prosthetics I’ve seen in a while on television. Another scene that comes to mind is Watchtower’s painfully ordinary main power switch. It felt extremely underwhelming considering the technological marvel Watchtower is supposed to be. And Hawkman’s death was intended to be moving, but I couldn’t help but laugh when the light went off on his chest. Ah SMALLVILLE, you’re nothing if not camp.

Aside from some visual shortcomings, the sheer amount of drama that we’re being exposed to is impressive. How, I wonder, are the writers going to bring it all together and end this ten-year Superman story? Stay tuned, fans, because we’re barely in the middle of the season as SMALLVILLE is clearly getting warmed up.