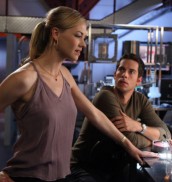 It doesn’t look like it’s going to be an easy transition for CHUCK in Season Four. While the premiere episode was as excellent as a reboot return that could be hoped for, the second episode “Vs. The Suitcase” is a mixed bag.

With Chuck (Zachary Levi) and Sarah (Yvonne Strahovski) having a seemingly perfect relationship as loving spies, there is an Achilles Heel – Sarah lives out of a suitcase, ready for the next mission but hasn’t given in to moving her stuff in to Chuck’s closet.

Of course, this becomes Chuck’s obsession throughout the episode as they globe trot to a European fashion show where a spy (posing as a model) is going to sell microchip bullets.

The model/fashion show/runway stuff is horrible – absolutely horrible. It’s the worst thing the show has done in awhile. Sure, it’s great to see Strahovski show a little skin, but the catfight on the catwalk – overkill.

Meanwhile, the Buy More is so efficient as CIA/NSA central, Morgan (Joshua Grimes) lets the General know that if they can’t bring in some chaos with inefficient employees, customers are going to want to hang out at the store more and that’s when they’ll start to realize something fishy is going on.

Hence, Morgan manages to bring back Jeff and Lester (Scott Krinsky, Vik Sahay) into the Buy Moron fold. They thought they were being sought by authorities in the Buy More fire at the end of Season Three, but now all is forgiven and the Buy More’s bad reputation restored.

Morgan’s influence extends to Casey (Adam Baldwin) who is convinced to reach out to his daughter Alex, who now knows he’s alive.

The episode wraps up rather nicely, and while there were some great little twists and turns, the show largely proved to be an uneven lot. It’s good the Buy More employees are getting a downgrade, that hopefully means the shenanigans will resume. And Chuck and Sarah’s relationship is evolving nicely. It’s nice to see them bicker a bit for a change.

However, something has definitely been lost now that Chuck has grown into his spy clothes. He’s no longer inefficient – he’s damn good, and maybe it’s necessary to progress the character, but a little ineptness goes a long way in grounding the show.

“Vs. The Suitcase” is not a horrible episode. Even a so-so episode of CHUCK is still better than most things on TV, but the show can’t afford too many of these with a 13-episode order if it expects to be renewed for the full season.