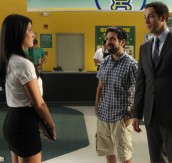 Once again, the spy comedy has become a whole new type of show in its fourth season – and guess what? It's still damn good

Very few shows can successfully reinvent themselves year after year and still retain their audience and their charm.

Yet CHUCK, now heading into its fourth season on NBC, has once again rebooted with “Vs. The Anniversary” and damn, it was kick-ass opener.

Whereas last year focused on former Buy More employee Chuck Bartowski (Zachary Levi) learning how to become an expert spy (and growing up), Season Four begins with Chuck realizing he’s now a spy and can’t escape who he is.

Although he agreed to give up the business for his sister Ellie’s sanity last year, there’s one thing Chuck can’t let go of – the search for his mother (Linda Hamilton).

With assist from best bud Morgan (Joshua Gomez), the two of them travel the globe searching for his mother, a quest that Chuck’s father had started, but never finished (he died in the Season Three finale).

Meanwhile, Casey (Adam Baldwin) and Sarah (Yvonne Strahovski) are on their own mission searching for a baddie Russian thug (Dolph Lundgren) with a super powerful EMP device.

The two storylines intersect (pun, not intended) as Chuck and Morgan have to get Casey and Sarah out of a bind. They’re nowhere near finding Chuck’s mom, but Casey and Sarah, by episode’s end, agree to help with Chuck’s mission.

The only way for this to happen, is for Chuck to re-enlist as a spy – something his former boss General Beckman (Bonita Friedericy) is going to make him do.

Oh, and the Buy More is now CIA/NSA central. No more yogurt shop – this is the new secret headquarters – all in plain site.

CHUCK returns with its eye clearly on the prize – it wants to continue to advance the stories and characters, without retreading on material covered in previous years. It’s very cool seeing Chuck and Morgan work together in the spy capacity, while it’s awesome to see Linda Hamilton back in action.

The relationship between Chuck and Sarah continues to grow (hence, the “Anniversary” in this episode’s title), and it’s very touching to see that Casey actually misses Chuck on their assignments.

You couldn’t ask for a better season opener, and here’s hoping CHUCK can easily win over a full season order without a major fight (or a huge Subway binge on the part of its fans).