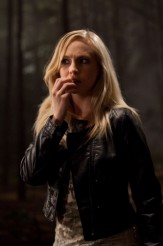 “Hey, I’m so sorry about the whole trying to kill your brother thing. Do you think we can still be friends?” Yes, it was pretty silly of Damon (Ian Somerhalder) to think he could possibly win back Elena’s affection. On the flip side, it was pretty mature of Caroline (Candice Accola) to break up with Matt (Zach Roerig) to protect him no matter how much it pains her. But let’s hear for the werewolves and their ability to kill a vampire with a single bite. This is all just more proof that season two of THE VAMPIRE DIARIES is going to be a very different from season one.

In “Bad Moon Rising,” Elena used Damon then rejects him completely. Does that make her a bitch? No people. I was a little leery that their journey to Duke would soften Elena up and perhaps even allow her to forgive Damon. That would have been such a bad storyline, especially when we found out that Damon did not know that Jeremy (Steven R. McQueen) was wearing the protective ring. Damon tried to kill Elena’s brother and blamed it on him just flipping out for a minute. Not acceptable. His wanna be burn by comparing her to Katherine has no merit. She owes him nothing. End of story.

Moving on, I must say that little Caroline is finally becoming relevant, and even more miraculously, is not nearly as annoying. Being a vampire has certainly changed her demeanor. She realizes her bloodlust may cause her to hurt or even kill Matt, something she cannot bear. In a moment I couldn’t believe, she makes the most selfless decision of her life and forces Matt to break up with her. Can you believe it? Caroline not being selfish? Caroline trying to be mature?

But now, bring in the wolves. No vampire saga could be complete without werewolves. THE VAMPIRE DIARIES just got the canine infusion in the form of Uncle Mason (Taylor Kinney). His appearance proves especially disturbing for the Salvatore brothers, however, when it is discovered that werewolves can kill vampires with a single bite. Not good news for the undead, but it should make for an interesting new dynamic on Mystic Falls.

That’s the word of the season: new. Season two of THE VAMPIRE DIARIES has gone out of its way to show that it truly is a whole new ballgame. Now the real question is, does new necessarily mean better? So far, the answer appears to be yes.  With the character development that has been occurring and the new enemies emerging, season two has all the elements needed to be a fine successor to the inaugural season.