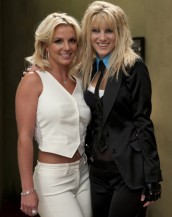 Consider this the Madonna episode without the really cool music. GLEE tackles Britney Spears, but what’s immediately evident is her imprint on pop culture is more about fashion and style, rather than substance.

It’s a debate raged in this episode “Britney/Brittany.” Mr. Schuester (Matthew Morrison) hates Spears and what she stands for, as do other students, but some of them want to express their inner Britney.

What follows is a bunch of people visiting the dentist and under nitrous, they start to find themselves inside Britney Spears-ville. Airhead Brittany (Heather Morris) is affected the most (first hating and then loving the singer) as she gets the most face-time. Even Spears herself shows up.

By episode’s end, the show devolves into a bumping and grinding display at a school auditorium performance that drives the students into a sex frenzy – something Sue Sylvester (Jane Lynch) warned everyone about.

The problem – it’s all rather lightweight, silly and way too over-the-top even by GLEE standards.

The song interpretations aren’t even all that good either. It’s an episode that’s all about showcasing a rather lackluster artist and forgetting about having a story to hinge it on.

Not a very good episode at all. Let’s hope the threat of more Britney Spears down the road is only a threat.