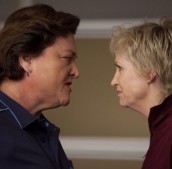 The second season gets off to a solid story start, but boy, do the songs totally blow

The Season Two premiere of GLEE turned out to be a mixed bag. Storywise, “Audition” had a laser focus, a mission. It achieved it in an interesting way and it shifted and moved some important story pieces around so characters could continue to grow and learn.

On the other side of things, the songs sucked. Not a single entertaining track in the bunch. The joy, at least the singing joy, was completely lost.

Not sure why. One of the comments from one of the characters of the show talked about how outdated Mr. Schuester’s (Matthew Morrison) song choices are. So maybe giving a little more contemporary spin, made sense.

But, alas, it didn’t help in jump-starting the show like so many musical numbers in the past.

The premiere was about auditioning and first impressions. When the cheerleading and glee club budgets are cut to give the money to the football team, the new female Coach Beiste (Dot Jones) proves to be a real beast in getting what she wants (championship) and telling it like it is. Naturally (or maybe not), both Will and Sue (Jane Lynch) agree to make Coach Beiste’s life miserable.

It’s fun to see Sue be nice to Will for a change, but it doesn’t last long. Meanwhile, Rachel (Lea Michele looking wildly undernourished) feels threatened by a new singer she’s discovered. Instead of inviting her into show choir, she sends her to a crack house instead to audition. Sadly, Vocal Adrenaline steals her away before she gets a chance to become a part of New Directions.

Other important things: Finn (Cory Monteith) is kicked off the football team, so now he’s a complete loser, while his former flame Quinn (Dianna Agron) is babyless and promoted back to head cheerleader.

There’s a whole lot of catching up to do with the show, and it does so with ease. It’s nice seeing everybody back, and it still delivers great one-liners from Britney (Heather Morris). My favorite – “everyone thought I went on vacation, but I got lost in the sewers.”

Overall, a decent episode, which states early on that New Directions are going to New York for Nationals (by seasons end). This is only the beginning of the new season, and while promising storywise, the music is going to have to step it up to be more competitive with its Season One self.