Home » LOVE AND OTHER DRUGS star Anne Hathaway on true love, being naked and Parkinson’s 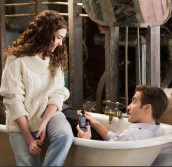 LOVE AND OTHER DRUGS star Anne Hathaway on true love, being naked and Parkinson’s

In the new romantic dramedy LOVE AND OTHER DRUGS (which opened nationwide this week), Anne Hathaway plays a young woman with Parkinson’s who strikes up an awkward new relationship with a drug salesman played by Jake Gyllenhaal.

She’s initially cautious about putting her feelings out there, particularly with her disease, but the end result is a film that redefines the romantic comedy genre. And with director and co-writer Ed Zwick pushing the boundaries of nudity between the two leads in a film, it certainly gives Hathaway a bunch of things to talk about as she takes five with ASSIGNMENT X.

TAKE 1:
On the notion of true love …
“I think love is everything,” says Hathaway. “Most people want love. The journey is sometimes really rocky to find it, and it’s always an exploration and an adventure. That’s one of the most wonderful parts of being alive and one of the worst parts of being alive when it doesn’t go well. I know it sounds kind of cheesy, but I love it when a movie reminds you of your favorite love songs and this movie does that for me. And it’s great when your life reminds you of love songs. It’s an incredibly intoxicating feeling that initial rush and then as you spend more time [with someone new] and it deepens, it becomes something else entirely. It becomes all the epic things that the world is made up of. At least that’s what my experience has been.” 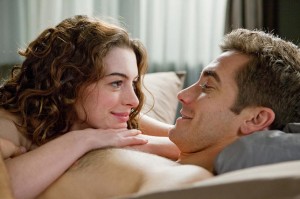 it is very hard to believe in on-screen love, and I am pumped that I could believe in ours.”

On being naked throughout the movie …

“One of the things we talked about early on is that when you are in the early throes of passion and lust and love, you spend a lot of time unclothed and the beginning of our characters relationship is in that moment,” says Hathaway. “And then obviously we go into a deeper place of love and companionship and intimacy.”

TAKE 4:
On researching Parkinson’s Disease …
“I got a lot of help from [director] Ed [Zwick],” says Hathaway. “Ed turned me on to the American Parkinson’s Disease Association and they were instrumental in putting me in touch with a few people who had been diagnosed around the age that my character had been diagnosed. One of those women is actually in the film. Lucy [Roucis], the woman at the Parkinson’s convention, with the dark hair, who is incredibly funny, is one of the key people I talked to. She actually had a big influence on the film. Another one, Maureen, had a big impact. Maureen was very generous and took me to a few support groups. I was a little nervous. I had gone to support groups for the movie RACHEL GETTING MARRIED, but this one felt a bit different. I talked openly about the fact that, like many people, I had experiences with addiction in my life and I’ve never known anyone who had Parkinson’s Disease, and I have never had it myself. So I was really coming at it from total ignorance. And I was anticipating a bit of resistance from the people in the support groups, and I was met with absolute openness and warmth. People wanted to share their stories. People were excited because Parkinson’s is a very, very insidious disease, but it doesn’t get a lot of attention. Everyone sat there and said, ‘Thank God for Michael J. Fox, because I don’t think anyone would know anything without his advocacy.’”

TAKE 5:
On working with the late Jill Clayburgh who plays Jake Gyllenhaal’s mother in the film …
“She and George Segal, as Jake’s parents, set his character up so beautifully with their performances, because we understood the world in which he came from and who he was raised by,” says Hathaway. “Their performances were invaluable and I’m sure I speak for all of us in saying our prayers and best wishes go out to Jill’s family.”

CLICK HERE for AX’s review of LOVE AND OTHER DRUGS