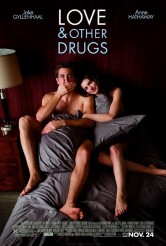 Movie Review: LOVE AND OTHER DRUGS

There’s a telling movie to be made about the pharmaceutical drug trade in the U.S. (and elsewhere), but LOVE AND OTHER DRUGS isn’t it. This wouldn’t be a problem if LOVE wasn’t aspiring to be that movie, while simultaneously putting romance front and center.

The romance in question blooms between Jamie (Jake Gyllenhaal) and Maggie (Anne Hathaway). Jamie is the lone unsuccessful scion of a family of overachievers. His younger brother Josh (Josh Gad), who is slovenly and immature but a stock market multimillionaire, hooks Jamie up with a job as a regional representative for Pfizer (a real company). Jamie is tasked with trying to persuade doctors to carry the antidepressant Zoloft instead of the rival Prozac, which is already being repped by killer salesman Trey Hannigan (Gabriel Macht), whose techniques include very literally pummeling the opposition.

While trying to make a sale, Jake meets Maggie, an artist/coffeehouse waitress living with early-onset Parkinson’s. Jake is a promiscuous ladies’ man and Maggie is very self-protective. Attracted to one another, both swear they’re not actually going to have a relationship. Then Pfizer brings Viagra to the market, and Jamie’s career gets a lot more successful.

LOVE has already gotten a lot of ink about the sex scenes. They aren’t brace-yourself-hot, but they do show a fair amount of the two game leads. Gyllenhaal and Hathaway are sweet together when they’re allowed to be, but the writers have given Maggie a serious case of “If you really loved me, you’d find me.” She keeps being horrible to Jamie on the grounds that she’s sure if she treats him with affection and trust, he’ll dump her when her Parkinson’s flares up, if not sooner.

Despite scenes of Maggie analyzing Jamie’s personality and concluding that he’s a far better person than he gives himself credit for, she’s conceived as being so narcissistically wrapped up in her own issues that we start to get annoyed (not to mention wondering why the supposedly self-absorbed Jamie masochistically puts up with so much).

There’s also the issue of what Jamie does for a living. For a film based on a book called HARD SELL: THE EDUCATION OF A VIAGRA SALESMAN by Jamie Reidy, LOVE has nothing to say about the drug beyond making jokes about what it does and noting its instant popularity.

The screenplay by Charles Randolph and director Edward Zwick & Marshall Herskovitz has a healthy cynicism about how Jamie, Trey and their ilk court the doctors who they hope will buy their wares, but the film seems to expect us to be shocked by the free-for-all party atmosphere and sexual set-ups, as opposed to any larger issues. We are shown drug company reps persuading doctors to start stocking one drug over another, but there’s no mention of the consequences of physicians making prescriptions based on bribes rather than what’s best for their patients, which seems like it would at least be worth bringing up.

Even the characters seem disconnected. Maggie goes with a busload of senior citizens on a regular basis to buy prescriptions in Canada, where they are much more affordable, but for someone so ready to dish out barbs, she is amazingly unconcerned about Jamie’s participation in the system that keeps her med costs so high.

Because we know that Jamie has a financial safety blanket in his family, no matter how childish Josh is, we’re never too worried about his sales goals. The rise of Viagra and Jamie’s finances don’t have much to do with the Jamie/Maggie love story. The romance swings between light humor and melodrama, losing momentum as it goes, though the actors are very likable and watchable.

The supporting cast is notable for a brief turn by the late Jill Clayburgh as Jamie’s mother, plus some welcome laughs from Oliver Platt as Jamie’s sales mentor and Hank Azaria as an imperturbable doctor who knows just what he wants.

LOVE AND OTHER DRUGS is neither an aphrodisiac nor an expose. Its emotional reach is beyond its grasp, but if you’re in the mood for seeing two likable, good-looking people come together, break apart, reunite and so forth, it will suffice.