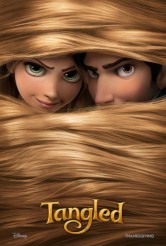 A charming version of the Rapunzel fairytale that plays as old school Disney animation, 3D notwithstanding

For those jonesing for an animated Disney fairytale in the traditional style, or just a fun film that can be shared with the kids, TANGLED fills the bill. Quick, to the point and entirely enjoyable, TANGLED takes the traditional Grimm story, gives it some action and the title princess some gumption and takes off in beautiful style, looking much like the old enchanted films of yore, with 3D that brings up a couple of moving moments and is otherwise unobtrusive.

Dan Fogelman’s screenplay posits that the witch Mother Gothel (voiced by Donna Murphy) has been keeping herself young for centuries. When Mother Gothel’s means of self-restoration are taken away and transferred to the new baby princess’ hair (but only so long as it is intact and uncut) the witch kidnaps the child.

Rapunzel (voiced by Mandy Moore) grows up in a hidden tower, believing Mother Gothel to be her actual parent and accepting the woman’s stories about the perils of the outside world. However, when Rapunzel is on the eve of her eighteenth birthday, her growing desire to leave the tower coincides with the arrival of young thief Flynn Rider (voiced by CHUCK star Zachary Levi). Rapunzel, using her hair and a frying pan, subdues the intruder, but strikes a deal with him: she’ll return his property if he’ll take her out to see the once-a-year lantern show that occurs on her birthday (she doesn’t realize that the lanterns are flown by her royal parents, commemorating the birth of their lost child).

There are adventures, dangers, songs by veteran composer Alan Menken and lyricist Glenn Slater, charming banter and great animation. The film’s arguable breakaway hit character never speaks: a vigilant soldier’s horse called Maximus tasks himself with tracking down the larcenous Flynn, making alternately like a bloodhound, a happy dog and a stern military commander (this feels like the equine/canine flipside of the catlike fire-breathers in HOW TO TRAIN YOUR DRAGON).

The character of Rapunzel is an appealing mixture of optimism and capability, as able to defend herself as Flynn is. Moore does a swell job of giving her warmth and identifiable qualities, making her curious rather than naïve. Levi brings touches of his title character from CHUCK to the personable Flynn and Murphy’s Broadway background is evidenced by her flair in voicing the ever-prevaricating, seductively villainous Mother Gothel.

Under the direction of Nathan Greno & Byron Howard, TANGLED is one of the prettiest (in the best way) animated features to come along in a while, with lovely green forests, real-looking water and soft artwork made by the characters filling the screen with color and light. The effect of the flying lanterns, where two hover out over the edge of the screen as the rest float upward, is suitably magical, and the characters are engagingly imagined.

Fogelman’s script is well-structured, so that set-ups are laid in efficiently, without banging us over the head as they happen. A tavern scene turns out to be more pivotal than it first appears, while there are a few nice reversals of expectation along the way.

There is a bit of blood from an injury (in case you have extremely sensitive children), but otherwise, violence consists of characters getting bopped on the head and one very long fall.

TANGLED is a delightful rendition of a well-known fantasy that can be enjoyed by Disney animation and fairytale fans of all ages.