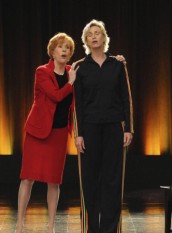 There’s reality and then there’s GLEE. And yes, this is a show that stops every ten minutes or so to have its characters break out in song, so grounding it in reality is not its strong suit and it shouldn’t be.

That said, playing fast and loose with “time” on a show can be one of the most annoying things for a viewer. THE EVENT has done that constantly this year. One minute there’s a threat that’s immediate, and the next minute we’re watching a subplot with different characters who are traveling three states over in a car in a matter of minutes (and it’s still in the same time frame as the other “events”). Ack!

This happens a lot on GLEE, but this week it got to be way too much. Last week it was made clear, “in two weeks, there’s going to be Sectionals.”

Well, they must have been referring to TV time, because one week later with “Furt,” we get a wedding that’s announced, planned, executed and delivered (with musical numbers, singing, caterers, etc.) in what amounts to a little less than one week.

Again, I get it. Non-reality, but please, GLEE, stop playing fast and loose with time. Just say, “Sectionals are coming up next month.” Don’t say two weeks and then have a wedding episode a week later.

Aside from that, when the hell do these kids get to practice for Sectionals when they’re busy preparing a marathon wedding?

That gripe aside, “Furt” proves to be another very strong episode as Kurt’s dad (Mike O’Malley) and Finn’s mom decide to tie the not. It becomes a growth episode for Finn (Cory Monteith) who has to man up and realize he can’t be a passive bystander when Kurt is being terrorized by a school bully who threatens to kill him.

It’s a thoroughly touching episode, with moments that have resonance and ring very true for a change.

The twist at the end also makes a lot of sense – and at least it was something that was paid off realistically and over a few episodes, instead of shoe-horned into one episode like many subplots on GLEE.

The B-story this episode revolves around Sue (Jane Lynch) deciding she will never find a man to marry, so she decides to marry herself. Showing up for the wedding is her shrill mom Dora (Carol Burnett) who proved to be an absentee parent because she was off hunting Nazi’s.

Now, while on paper, the idea that Carol Burnett is a modern day Nazi hunter may have sounded funny, but, the execution and pay-off, not so much. It’s a cheap gag and since we’ve already heard that she was going to play a Nazi hunter anyway, the shock value is no longer there.

While most of the Sue marrying Sue/her mom kills Nazi’s in Ohio nonsense doesn’t work, the emotions between the two do. Sue realizes her mom is a bully, and in some ways she realizes that she too is a bully. Though, I did love the track suit wedding gone. Nice touch.

However, I really doubt that Sue has learned a lesson from the travails she’s witnessed Kurt go through during this episode. It would be nice to see some change in her, but like the time fudging going on with the show, Sue’s character will always be her usual verbally abusive self. She will never change (even if she says she will), otherwise the show would not have a worthy antagonist week after week.

Songwise, the episode didn’t hold up very well. “Ohio” was a nice, funny duet for Lynch and Burnett to sing, but it was more novelty than necessary (although, you have Burnett, you have to get her to sing!) The two wedding songs were okay – but nothing that blew me away like Gwyneth Paltrow on “Forget You” last week or Darren Criss on Katy Perry’s “Teenage Dream” the week before that.

Another problem I’m having with the show is the accelerated character and relationship development that happens off-screen. Artie (Kevin McHale) and Brittany’s (Heather Morris) relationship has already started before it even began. We have barely seen how that’s blossomed and how it’s working – and to me, that would have been very, very interesting and very different.

I’m also not buying the relationship between Quinn (Dianna Agron) and Sam (Chord Overstreet). Sam professes undying love for her, but there’s not a single romantic spark between the two of them. He just wants to get her in the sack. Quinn has grown so much since last year and has become such a strong, independent thinker, giving her a romance with someone as bland and vanilla as Sam is a disservice. Give her a challenge as a romantic love interest. Let her grow and find herself instead of falling right back in love with a jock. I can’t see this relationship lasting long on the show. It’s forced and contrived, and sooner or later the writers will realize that too.

Still, there’s way more good than bad with “Furt.” It ranks up there as one of the better episodes of Season Two. If only the rest of the cast was given such strong, consistent recurring arcs like Kurt, the show wouldn’t be so topsy-turvy this year. But with the influx of gimmick episodes and special guest stars, it’s hard to give every major cast member ample time to shine, which is a big shame, because they deserve so much more.