For a film based on the classic Brothers Grimm story RAPUNZEL, the end result of TANGLED (opening today) is anything but grim.

In an exclusive interview with ASSIGNMENT X, Kahrs spoke about the process of bringing TANGLED’s rich look to life. 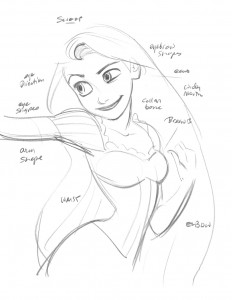 ASSIGNMENT X: When did you come aboard the project?

JOHN KAHRS: I came here about three years ago and that was when Glen [Keane] was in the director role, but he was also doing character design for Rapunzel at the same time. There are all these changes that have happened since then. I worked at Pixar for ten years, and I’ve always been drawn to human animation. So I think it was a good fit for me on this film.

AX: All the Disney princesses have been cel animated, why was it decided to do TANGLED computer generated?

KAHRS: To be frank, I wasn’t there when that decision was made. I think John Lasseter, asked Glen, in your heart of hearts, would you rather do this CG or 2D and Glen said he wanted to do it in CG. He said, “there is something really special in this story you could tell in CG.” If you look at Glen’s work on POCAHONTAS, there’s a scene where Pocahontas meets John Smith for the first time. Her eyes are focused on him. What Glen was trying to do there with the limited resolution for the line width, for the pencil line, is so subtle and it’s so hard to control. He’s right there are at the bleeding edge of what the medium is capable of. When you try to do that subtlety in CG, it’s much, much easier. It’s not that it’s easy, but the kind of film that TANGLED is, is full of that subtlety. There’s a stillness and you see and feel what the characters are feeling and thinking – and you see that it in their eyes and the way their eyes are shaped and moved. Glen is so masterful at controlling that and giving guidance to the CG animators. It turned out to be a very good fit in the end. He was able to draw what he wanted to see and we were able to animate it directly. We had his drawings all around us, all the time. It really gave us an indication of how the acting should play out.

AX: What were some of the biggest challenges?

KAHRS: We went through so many versions of Rapunzel and thought, “this is it, this is the design.” And you would implement it and you would make the computer model, and you would start animating it and it wasn’t it. There was something missing. There were times we thought it was fantastic, and we would look at it a week later and thought, “this isn’t right, she doesn’t look good.” There must have been five or six versions of her. That’s where Glen really shined.

He came back from a sabbatical at one point, and we had done all these tests with her and he would just draw over and know exactly what to do. Just getting the characters built and moving was a huge ordeal. It was a very elusive goal. My role was the liaison from what the [new] directors [Nathan Greno and Byron Howard] wanted from the performances with the different animators. I really credit the directors, in particular, in seeing beyond all the technological clutter and getting right back to the heart of what the character is feeling and thinking. If you start thinking of your animation from the inside out, I think the character is going to have more depth, and more layers and integrity. You’ll feel that in the performance. I remember seeing the film at the wrap party and that first shot of Rapunzel in the tower I found it to be so arresting. I instantly found her to be so watchable. It carries through the whole film and they feel like real people. 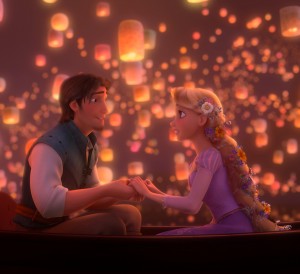 AX: What other boundaries did you push with the film?

KAHRS: For me, it’s called Sequence 14, when they’re both sitting on the log by the fire and she has just healed Flynn’s hand and they’re talking. For my money, that sequence, the believability and the depth in the writing and the voice acting and animation acting, the animation is so natural and fluid, it’s a very immersive scene of having them open up to each other. It’s not a particularly exciting action scene. It’s just two people sitting there. It feels very real and immersive, and for human acting in animation, it’s some of the best I’ve seen. To me, that was an achievement. Also, I’m happy with being able to get these designs to come to life. These designs that seemed too elusive at first. They’re character designs that have a depth and integrity, that I haven’t seen before. It’s very Disney, they’re very rich and expressive characters, very alive and appealing, and I feel that, that’s an accomplishment.