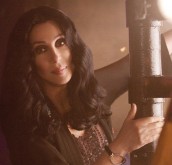 Having focused more on her singing than acting over the last few years, Cher found it liberating to return back into film, as she takes five with us to discuss BURLESQUE, singing on screen and being immature.

TAKE 1:
On the movie being much more fun to work on than she thought it would be …
“I wanted to sing in a film, that’s what I really wanted to do and I didn’t quite feel that Tess was exactly the person that I kind of thought she should be, and then little by little [the character] got better and better,” says Cher. “I wanted to work with Stanley [Tucci]. I really wanted to and I didn’t really realize that I would have that much fun with everybody, as much fun as I did. I loved working with Peter [Gallagher]. He was great. All the girls were great. Christina [Aguilera] was great. So it became a lot more fun than I ever anticipated that it would be. 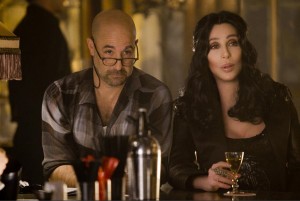 TAKE 4:
On acting again …
“I actually didn’t think about acting ever again,” admits Cher. “I didn’t think about it one way or another. It just hadn’t happened and I thought, ‘Well, this is probably not going to happen anymore and that’s okay.’”

TAKE 5:
On being immature …
“I’ve just always been like this and my mother is like this, too,” she says. “My mother is eighty-four and she’s really immature. The older that we get we seem to get more and more immature. I have no idea. I keep thinking that I’m going to act like a grown-up woman someday and the only thing that I’m kind of responsible about is that I take care of my family and that part of me is kind of responsible. Then the rest of it, I don’t know how to act any different than I am. Stanley and I joked constantly and he’s much meaner than I am, always at my expense. He laughed at me constantly during this film. He made fun of me constantly. Actually, I did, too. I’m fascinated by men with great senses of humor. That’s a major thing for me. Stanley is really intelligent, too. So we really laughed a lot and it really helped our working relationship because we could kind of go and be funny off camera.”