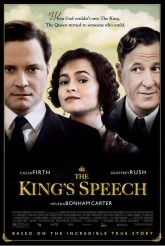 An engrossing fact-based drama, starring Colin Firth and Geoffrey Rush as the unlikeliest of allies and eventual friends

In THE KING’S SPEECH, a stressed-out man with a lifelong stammer goes to a speech therapist for help with public speaking. If this doesn’t sound like especially fertile ground for gripping drama, let’s add that the year at the start is 1934, the stammerer in question is the British Prince Albert (Colin Firth) and that his therapist is commoner Lionel Logue (Geoffrey Rush), an Australian immigrant and family man with a passion for acting that is, alas, more enthusiastic than artistic.

Bertie, as he’s known to his family, looks like he’s going to his own execution when he’s got to give a radio speech, nearly strangling on every word. Nevertheless, he’s had it with treatment. His wife Elizabeth (Helena Bonham Carter), now best known as the mother of England’s current Queen Elizabeth (seen in the film as an adorable little girl played by Freya Wilson, with her equally appealing sister Margaret played by Ramona Marquez) goes behind his back to seek out Lionel, who comes highly recommended, with the caveat that he’s unorthodox.

Lionel proves to be intractable – his client may be the Duke of York, but he’s got to come to Lionel and not the other way round. Elizabeth is impressed enough by Lionel’s determination and assurance in his methods to bring Bertie to see him, but the whole enterprise nearly falls apart again when Lionel insists on calling the prince Bertie, rather than “Your Royal Highness” (the traditional form of address by all but the prince’s family), and wants psychological details.

Though there are some very rough patches – part of the reason Bertie stammers, after all, is that he places a great value on propriety – the sessions go forward. What is once merely important becomes crucial once Bertie’s father, King George V (Michael Gambon) dies, and it becomes increasingly clear that Bertie’s older brother David (Guy Pearce), best known to the world as King Edward VIII, is unlikely to continue as monarch. At the same time, Hitler’s power is rising and war with Germany looms. Bertie, much as he dreads the prospect, is on his way to becoming King George VI and must prepare his country for what is to come – which he can’t do unless he can speak to them.

The script by David Seidler, based on historical facts (a “Logue family consultant” is named in the end credits), manages to condense years of far-flung events into a swiftly flowing, tightly woven narrative with genuine suspense.

Firth is so absolutely sympathetic and filled with conviction in Bertie’s dread, isolation and warmth toward his wife and daughters that we are always pulling for him, even when he lashes out unfairly at the extraordinarily patient and inventive Lionel. Rush has demonstrated in other roles that he can be an outstanding performer – here he is also an outstanding listener, making Lionel keenly attuned to everything about his client.

Director Tom Hooper uses tight shots and sometimes even a fish-eye lens to emphasize how weird and stifling many situations are for Bertie. At the outset, this seems like it may be a stylistic distraction, but it ends up working. Hooper creates a great sense of time, place and class system, making it clear just how far personal space is meant to be around each character, and what it means when this space is breached.

Bonham Carter is the epitome of supportive warmth as Bertie’s wife Elizabeth, comically disapproving of her brother-in-law’s liaison with the scandalous Mrs. Simpson (Eve Best). It should be noted that THE KING’S SPEECH shares Elizabeth’s disapproval, albeit for different reasons. Pearce sells the movie’s Prince David/King Edward as an entitled, whiny and rather vicious character who has only the vaguest interest in what’s going on in the world beyond his romance. Timothy Spall is a suitably growly, tough Winston Churchill and Jennifer Ehle is delightful as Lionel’s amiable wife.

The movie takes such great care examining the relationship between Bertie and Lionel, filling it with humor, drama, surprises and a sense of urgency – we are talking about the start of World War II, after all – that we come to feel a sense of investment in them, as if they are people we are not merely watching, but actually are involved with ourselves. THE KING’S SPEECH lingers in the mind and the emotions long after it ends, communicating to us in the spirit of Logue’s work.