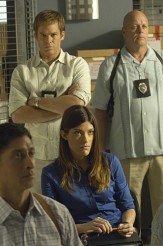 There is at least one jaw-dropper of a moment in “In the Beginning,” and it’s not the finale where Dexter (Michael C. Hall) and Lumen (Julia Stiles) finally get together and Dexter reaches the realization that he’s found someone who neither sees him as nor needs him to be a monster. It’s satisfying, but we’ve seen this coming for awhile. Since there’s a cloud of doom hanging over the whole business, we’re also worried about where this is going, but that’s no shocker either.

No, DEXTER manages to catch us unaware with the behavior of a newly introduced character, Emily (Angela Bettis), the woman whose blood is in the vial Jordan Chase (Jonny Lee Miller) wears around his neck. Dexter got a small sample of the blood, but unfortunately Jordan detected Dexter’s clue-gathering. Through DNA analysis, Dexter discovered that the blood did not belong to one of the victims of the serial-killer club that tortured Lumen, but rather is from a living woman who is one of Jordan’s contemporaries.

Emily initially refuses to talk to Dexter and Lumen when they try to query her about whether she knows Jordan. When Deb (Jennifer Carpenter) and Quinn (Desmond Harrington) are allowed to search the apartment of Jordan’s security chief Cole (who has vanished, thanks to Dexter and Lumen), they find thirteen DVDs of the rape and torture of “the barrel victims.”

Dexter realizes the thirteenth disc shows Lumen and if Deb sees that, his detective sis will figure out everything. He manages to steal the disc and replace it with a damaged one. Lumen insists on watching and rewatching the disc of her abuse, while Deb is stuck at the office watching the other twelve. Lumen makes a copy of the footage and brings it to show Emily, who this time tells Lumen of Emily’s long-ago gang rape by four boys at the behest of Jordan. Three of the men are dead, killed by Dexter, and Jordan’s identity is known. Emily gives Lumen the name of the fifth member of the group, Alex (Scott Grimes), now a banker. 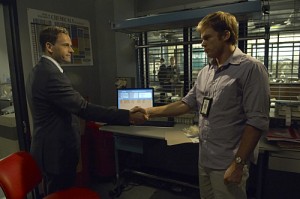 The big shocker here is that it turns out Emily is still totally in Jordan’s thrall, having spoken to Lumen only because Jordan told her to do so. Jordan tries to set up Dexter and Lumen, but he underestimates Dexter’s caution, so they are able to kill Alex without interruption – this time, it is Lumen who delivers the fatal wound.

What Dexter and Lumen don’t know is that Liddy (Peter Weller) has bugged them with surveillance devices signed out to Quinn, and he’s hearing and seeing – and recording – some pretty incriminating material.

As is the case in most DEXTER episodes, there’s a hell of a lot going on. We see only the briefest flashes of what’s on the DVDs, but what we hear is pretty disturbing, as is the concept that the content is so sick that even Matsuka (C.S. Lee) won’t joke about it. Things move at great speed here – perhaps too much so, given that Emily’s background and pathology are laid out in a one-two punch. People who like to speculate about story arcs may be able to guess at her precise plot function, but that’s right now more a matter of speculation than anything laid out in clues.

We’re certainly building up a healthy head of animosity at the long-term villains. Lee is making Chase’s false innocence and bone-deep malice quite hateful and Weller is expansively sleazy as Liddy. On the flip side, Stiles continues to reveal new layers to Lumen, while Hall, late in Season Five, shows us that Dexter is capable of registering new experiences.

“In the Beginning” is a very good episode, with the caveat that some of it feels a bit condensed to fit it into the running time.