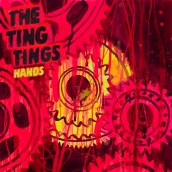 If Blondie had a baby it would be The Ting Tings, the irresistible electro-pop duo fronted by eclectic noisemakers Jules De Martino and Katy White.

Their debut disc 2008 WE STARTED NOTHING captured an ‘80s sensibility and was definitely rooted in the spirit of Debbie Harry’s New Wave goodness.

Many of the song lyrics were repetitive, but that was part of their anarchic charm especially with their hit single “That’s Not My Name.”

Now, the duo have released their first single “Hands” alongside two remixes from their forthcoming (and untitled) 2011 album.

“Hands” feels even more polished than the WE STARTED NOTHING songs, capturing the band progressing their sound as White digs a little deeper into their inner disco diva.

The lyrics are pretty simple, with a chorus that repeats “So clap your hands if you’re working too hard” over and over again, but that’s part of the simpler-the-better modern music world. The theory is if the beats and production value sound good, no one will really care how vacuous the lyrics are (case in point, The Black Eyed Peas infectious, but empty “I’ve Got A Feeling”).  The song even acknowledges it’s all in the sound – “and the beats so hard/your workin’ workin’”.

Of the two remixes, the “Retrograde Remix” expands the song’s instrumentation even further over a lush and catchy eight-minute running time. It’s epic, sassy and everything a remix should be.

White has said the tracks on the new album are a “little dark and danceable,” so this track falls in the latter category, but it’s hard to judge what they’re ultimately going for until we hear more. But for anyone who fell in love with WE STARTED NOTHING, “Hands” is enough of a tease to suggest the band is on the right track.