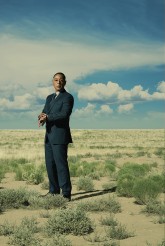 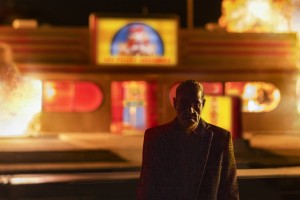 ASSIGNMENT X: Because BETTER CALL SAUL starts years before BREAKING BAD starts, even though you are older in real life, you have to play Gus younger than he was in the earlier series. Is it difficult playing younger than you were playing him during BREAKING BAD? Do you have to move differently? 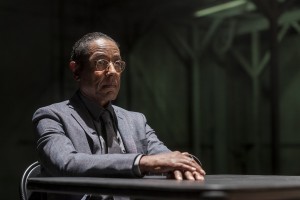 AX: What is the time difference between BETTER CALL SAUL and BREAKING BAD?

AX: Do you know yet if GODFATHER OF HARLEM is being picked up? Are you going back to playing Adam Clayton Powell?

ESPOSITO: We think so. It’s a show that’s a big hit for Epix, people really love it. I know, for me, I won’t say I’ll be heartbroken if we don’t, but I’ll say that it’s a pretty ninety percent chance that we are [returning], from the reaction that we’ve had for the show.

AX: Is it more difficult, or fulfilling, to play someone like Powell, who was a real person, versus someone who’s not a real person, but is as well-established as Gus?

ESPOSITO: Very different animals, but for me, playing someone who has lived and had a history is extremely important to me. I never want to be a carbon copy of that person, because after all, I am an actor and an artist. I want to bring the highlight of that character to life. The challenge for me is always to honor the history. I’ve read so much about Adam Clayton Powell, and inundated myself with his speeches and videos and everything else, and then I walk away, give it up, and go, “What is the essence of who he was?” I’ve met his sons, I knew his history when I was young. Very colorful man who was complete in every sense of the word and feared nothing. So in that sense, you may be put into a little box. I’ve got to be Powell. And as Gus, I can create what I want to create, surrounding what’s written – in the parameters of what’s written for me. Powell’s a bigger responsibility. 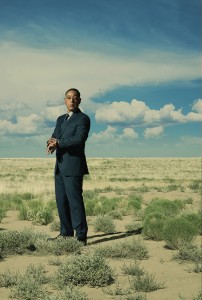 AX: Powell was a very complicated man, but at the same time, such an important political and social figure …

ESPOSITO: He is the pillar. And for me, that responsibility, I don’t take lightly. Eight hundred and sixty-eight bills have never been surpassed in Congress. Never surpassed. The Minimum Wage Act. The Equal Opportunity Act. The National Endowment for the Arts, which affected my life as an artist – no one knows this man did this. So for me, the importance of my role as Powell is to do him justice, and to inspire people to look at my performance and go, “Wow, this guy is so interesting, this character. Who is he?” And then to go back. “I need to know more.” [GODFATHER OF HARLEM co-creator] Chris Brancato called me, and said, “Have you been following social media?” I said, “Chris, sadly, I’m not. I’m doing three other shows.” “Do you know what they’re saying about your performance?” I said, “They’re not saying it about me, they’re saying it about Powell.” He said, “Yes. Everyone is wanting to go back and find out who Adam Clayton Powell is.” And I said, “Hooray.” Because that was our initial intent.

AX: It seems like 2019 was a good year for premium cable series shedding light on less-known black history, like the people in GODFATHER OR HARLEM, or the Tulsa mass murders in WATCHMEN …

ESPOSITO: You go to the Tulsa riot in WATCHMEN, and they put Bass Reeves in that, who was in Oklahoma and Muskogee. He’s the Lone Ranger. and those are two separate stories that were blended in many ways. And I’ve been wanting to tell the Bass Reeves story for the last twenty years. So has Morgan Freeman. We have scripts and everything else. We’ve had nothing. We’ve been talking that, too, but that’s a beautiful story as well. We’ve been working on it, working on it, working on it. We won’t let it go. We’re trying to figure it out. My former wife sat me down and our children three weeks ago, and she had been talking about WATCHMEN, WATCHMEN, WATCHMEN, and to watch that episode with Bass Reeves.

Those are the stories we want to know, because they empower us as human beings, they bring us together as people, in terms of our humanity, and they allow us and our imaginations to soar, connected to the history we’ve already lived. Look how we’ve graduated. From “I want equality, I want equality,” fighting for it, and saying, “Oh, look what happened to us,” through all these things that happened. Now we’ve graduated to being able to be, “Look what we did.” Changed the world. So we have the opportunity now to be proud of our stories, and have other people honor them as well.

AX: Going from American history into the intergalactic long, long ago, you’ve also entered the STAR WARS ‘verse as Moff Gideon on THE MANDALORIAN …

ESPOSITO: Yes. Of course, everyone loves Baby Yoda. It’s being coined THE BABY YODA SHOW. What a terrific character on its own. My children called me immediately after seeing that episode and said, “Hey, Papa, please don’t hurt that baby.” You assume I want to hurt him, because you assume I’m a bad guy [gives an evil laugh].

AX: Well, you do have an evil-looking saber …

ESPOSITO: Maybe it’s just to protect myself. I have deep, deep interest and affection for Baby Yoda.

AX: Are you enjoying working on THE MANDALORIAN?

ESPOSITO: [It is] such a wonderful amount of fun. New technology, very, very different, it’s very heroic, it feels like a heroic story. But the best thing for me is that I love Westerns, and it is a space Western for our time.

AX: How are you scheduling all of this?

ESPOSITO: Ask the guy behind you [Esposito indicates his manager, Josh Kesselman]. Somehow, how am I scheduling all this? Magic. Here’s the honoring for me. Bonnie Bernstein said it. She said, “Hey, it’s a tribute to you that all of these productions want to be able to figure out how to arrange their schedules so you can do their shows.” I truly feel blessed. I have great representation. My manager Josh Kesselman is behind you, a great guide and partner, I feel like, not only in my directing career and acting career, but now we’re talking about producing things that mean things for all of humanity. When you have people around you that inspire you to think differently, it becomes easier. And when you let your ego go, and you stop forcing things, then it becomes easier as well. Then everything runs a little smoother.

So my team, especially Josh, has enabled me to free myself from the minutiae of thinking what I don’t need to think about. And I just need to think about my creation, and what I create. And so the presentation of material, and meetings with people and directors that might be interesting to me, is there. And all I have to do is think about, “Is this something that I really want to do that will expand me creatively?” There’s another side to me you haven’t seen that’s about to come, where you see me playing guys who are tough and intimidating, and you see me playing – I’ve done musical comedy, people don’t know about that, on Broadway for many years. And I love comedy as well, we’re looking for that migration to that world. Because after four o’clock on the set, as quiet as it’s kept, I lose my f***ing mind [laughs].

ESPOSITO: I’m not doing WATCHMEN, I’m just inspired by it.

AX: So you’re currently on …

ESPOSITO: Oh, my goodness. So GODFATHER OF HARLEM, MANDALORIAN, BETTER CALL SAUL, THE BOYS, [which is] Eric Kripke, superheroes.

AX: And what would you most like people to know about this season of BETTER CALL SAUL?

ESPOSITO: Oh, I’d like them to know that Season 5 explodes with exactly what they want to see. Those who have maybe been distanced from the show because it’s so character-driven, and wanted to see more of a BREAKING BAD feeling of a show, will be satisfied by this Season 5 as we race to the end of telling this story.

This interview was conducted during AMC’s portion of the Winter 2020 Television Critics Association (TCA) press tour.