The actor gives the scoop on the ROSEANNE spin-off 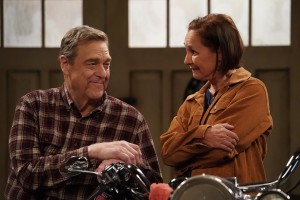 ABC’s Tuesday-night comedy THE CONNERS, now in its second season, was born when the network canceled its 2018 revival of ROSEANNE. The original ROSEANNE had run on ABC 1988-1997. The new version brought back nearly all of the original cast in their original roles, including John Goodman’s Dan Conner – who had seemingly been killed off in the final original season of ROSEANNE. The revival explained that Dan’s “death” had simply been a plot point in a story written by his aspiring novelist wife Roseanne (Roseanne Barr).

At the time, Goodman said his opinion of the crafting of Dan’s return was, “I didn’t really care. I thought it was a clever way to do it, to handle it, and get it out of the way.”

When Barr’s public racist speech caused ABC to part company with her, no one wanted to abandon a successful series and an otherwise tight cast. ROSEANNE executive producer/actress Sara Gilbert (who plays Darlene Conner-Healy, one of Dan and Roseanne’s daughters) got together with writers/fellow EPs Bruce Helford, Bruce Rasmussen and Dave Caplan to develop THE CONNERS, which premiered later in 2018. The spinoff has the Conner family coping and moving into new phases of their lives after the accidental opioid-overdose death of its matriarch.

Goodman, originally from St. Louis, Missouri, works constantly on both the big and small screens. The actor earned seven Lead Actor in a Comedy Emmy nominations during his tenure on the original ROSEANNE (he also was nominated for several other Emmys, and won one as Outstanding Guest Actor for his work on STUDIO 60 ON THE SUNSET STRIP).

We were able to catch up with Goodman briefly to discuss THE CONNERS Season 2.

AX: Did you actively want THE CONNERS to come into existence at the time when the ROSEANNE revival’s cancellation seemed like it might be the end of the show?

GOODMAN: Yeah. Well, I was so shocked that I didn’t know what was going to happen, but I was pleasantly surprised when they brought us back on the air. 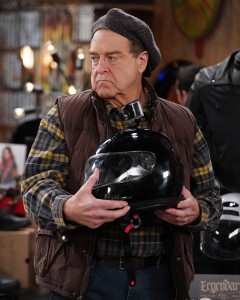 AX: Do you feel like Dan is very different now than he used to be?

AX: Dan is very slowly exploring dating as a widower, significantly with the character played by Katey Sagal. Are you enjoying getting to play Dan opposite some new scene partners, the actresses playing Dan’s potential love interests?

AX: Do you have a preference between half-hour, one-hour and film?

GOODMAN: No, I don’t have a preference. I haven’t done many one-hour shows, so this is pretty much what I know, half-hour shows and movies. So yeah. Whatever I’m doing is fun. 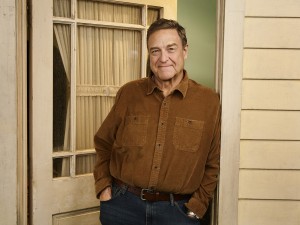 AX: What would you most like people to know about this season of THE CONNERS?

GOODMAN: I have no idea what the audience will do, but I think if we’re having a good time, they’ll see that.

This interview was conducted during ABC’s luncheon for the Winter 2020 Television Critics Association (TCA) press tour.

Article: THE CONNORS: Exclusive interview with actress/executive producer Sara Gilbert on Season 2 of the ROSEANNE spin-off