The actress/executive producer chats about the ROSEANNE spin-off 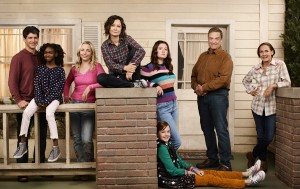 THE CONNERS, now in its second season on ABC Tuesday nights, is the spin-off/continuation of the network’s ROSEANNE. The original ROSEANNE series starred its co-creator Roseanne Barr as Roseanne Conner, a blue-collar worker, wife (to John Goodman’s Dan) and mother of three. The show ran on ABC from 1988 through 1997.

In 2018, ABC brought back ROSEANNE with nearly all of its original cast as the characters twenty years older than when we last saw them. Sara Gilbert, who stars in both editions as Roseanne and Dan’s daughter Darlene, was one of the prime movers of the revival, served as an executive producer on the new edition. The show earned great ratings. However, it was canceled after only nine episodes due to well-publicized racist comments from star/executive producer Barr.

The fate of the cast and crew seemed in doubt. Then Gilbert got together with writers Bruce Helford, Bruce Rasmussen and Dave Caplan to develop THE CONNERS, which focuses on the family coping after matriarch Roseanne dies of an accidental opiate overdose. Darlene is now Darlene Conner-Healy, separated from her husband (played by recurring guest star Johnny Galecki), raising their two children Harris (Emma Kinney) and Mark (Ames McNamara).

Native Californian Gilbert, who also served as a host an executive producer on THE TALK, takes some time to talk about THE CONNERS.

ASSIGNMENT X: You and the whole company went through some big transitions – bringing ROSEANNE back, becoming THE CONNERS, and now you’re in Season 2 of THE CONNERS. Which of those was the biggest transition for you? Just bringing it back as ROSEANNE to begin with?

SARA GILBERT: Probably bringing it back. Going from not doing it to doing it was a pretty wild experience. It had been so many years.

AX: Was getting everyone back together like herding cats, or was everybody pretty eager to come back?

AX: Can you say what’s new with THE CONNERS in Season 2?

GILBERT: In Season 2, just continuing to explore the relationships. Darlene had to sort out her love life a little bit, so now she’s moving forward with Jay Ferguson’s character, Ben, and Dan has continued to deal with the lose of Roseanne and moving forward, he has sort of a complicated relationship with Katey Sagal’s character [Louise]. Becky is dealing with being a single mom and the ups and downs of that, trying to find child care. So just the way you follow a family, I’d say, that’s what’s unfolding with us.

AX: Are you going to stick with Katey Sagal recurring as Dan’s love interest, or are you scrolling your list of actresses of that age, going, “I’ve always wanted to work with her – and her – and her”?

GILBERT: I love Katey, and as long as she wants to do the show, personally, I’d love to have her around.

AX: Since THE BIG BANG THEORY has finished, might Johnny Galecki come back on THE CONNERS a little more?

GILBERT: I hope so. The door is always open if he wants to come back. 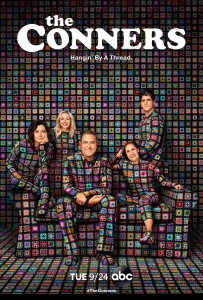 AX: Are your producing responsibilities on THE CONNERS the same as they were when you started the ROSEANNE revival, or have they amped up or down in any way?

GILBERT: No, it’s the same.

AX: Have you been through any big transitions in THE CONNERS’ writers’ room?

GILBERT: Not much. I’m trying to think. Because the show does one-season contracts, sometimes you’ll lose somebody – they’ve got a development deal or they whatever – but overall, the main players are the same.

AX: Do you feel like the themes on THE CONNERS are pretty much the same this season, or are you tackling anything you might not have tackled a year ago?

GILBERT: Well, I think it changes because the characters get older. So Harris, my daughter, is eighteen, and dealing with her leaving the house and trying to get her back. There are just things that change because of the ages of the characters. And then because Becky’s [Alicia Goranson] baby was born, there are stories that come out of that, that wouldn’t have happened.

AX: But no big political issues, apart from how rough it is for the working class generally?

GILBERT: Right. I think that’s sort of always been what the show has done, and we haven’t ever really chased issues or political topics. It’s just how it naturally affects the family. 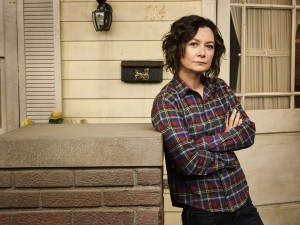 GILBERT: Producing right now, and developing with my production company.

AX: And what would you most like people to know about the rest of this season of THE CONNERS?

GILBERT: I think there will be some satisfying resolutions to some of the storylines they’ve been watching, and even if people haven’t been watching, the end of this season will be pretty compelling.