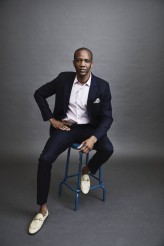 The actor talks about his new family series 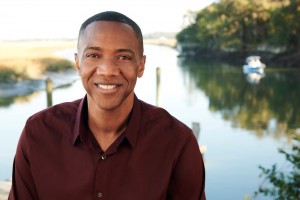 NBC’s COUNCIL OF DADS premieres on Tuesday, March 24. In the ten-episode first season, gravely ill Scott Perry (Tom Everett Scott) gets his three best friends to promise to help Scott’s wife Robin (Sarah Wayne Callies) to help raise the couple’s five children in the event of his death. Each episode focuses on a different milestone occasion during a crucial year.

J August Richards plays Oliver, who is not only Scott’s friend, but also Robin’s pal from their college days and now Scott’s oncologist. Richards is a multi-hyphenate who earned Daytime Emmy nominations for his writing, directing and guest-performing work on the digital series GIANTS. As an actor, Richards was a regular on all five seasons of ANGEL and recurs on MARVEL’S AGENTS OF SHIELD as the heroic Deathlok. Other regular gigs have included two seasons as a lawyer on RAISING THE BAR and one season as a law officer on KEVIN (PROBABLY) SAVES THE WORLD.

At a Q&A panel for COUNCIL OF DADS with executive producers/writers Tony Phelan and Joan Rater, and fellow cast members Callies, Michael O’Neill, Clive Standen and Michele Weaver, Richards discusses his work on the series. Afterwards, he engages in some follow-up conversation, including a little ANGEL talk.

When the actors are asked whether they’ve had a comparable situation in their real lives, Richards replies, “I’m only now just realizing that people I’ve referred to as aunts and uncles my whole life, so many cousins, I’m actually not related to them. And I’m only learning now that we have no [blood] relation at all.”

What was Richards’s reaction when he first read the COUNCIL OF DADS pilot script? “The message of it is so simple that it really hits me in a place where I live, which is that family is really not limited to race, sexual orientation, not even genetics. Your capacity to love is what makes you family. So the message was just so simple that I was moved by that, and I was like, ‘If I could be a part of this show that is part of something that I would really love to say to the world, then I would be blessed.’ And I am.”

Richards adds that he’s happy he got to work with executive producers Phelan and Rater years ago, while the pair were on staff on GREY’S ANATOMY when Richards played the younger version of regular James Pickens Jr.’s character.

“Can I just say that that fact actually saved me in my audition? I was walking up to my audition for this beautiful project, and as I was mounting the stairs, I was so nervous that I was literally thinking to myself, ‘All right. You can sell your house, and you can go into teaching.’ Because I was like, ‘I don’t think I can ever do this again.’ I was so physically nervous for some reason. And as I was sitting out in the lobby, I remember grounding myself by thinking, ‘All you have to do is love the person you’re reading with. That’s all you have to do.’ So I was invited in. I walk in, and Tony says to me, ‘We know you from GREY’S ANATOMY. We loved working with you. You were so great on the show.’ And it just put me so completely at ease.” He turns to the executive producers. “So I have to thank you for that now in front of everybody.”

ASSIGNMENT X: Did you know that you’d with Tony Phelan and Joan Rater before, or did you think they wouldn’t remember you? 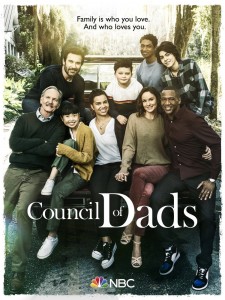 AX: Had you worked with any of your COUNCIL OF DADS cast mates before?

RICHARDS: No, I have not. First time with everyone.

AX: How are doing scenes with the actor who plays your husband?

RICHARDS: His name is Kevin Daniels. We’re friends, we’ve been friends for a long time. It’s so funny, because when they were casting, every guy in L.A. called me and was like, “Hey, I’m going in for your husband.” So I was like, that was really cool. He’s absolutely wonderful. He just wrapped playing Longinus on MODERN FAMILY. He works all the time, such a talented guy. We love each other, and it’s easy.

AX: How does Kevin Daniels’s character react to your character agreeing to be part of the Council of Dads?

RICHARDS: That’s a major conflict for Oliver, in that he has a family of his own. He and his husband Peter have been together fifteen years. They have a thirteen-year-old daughter. My daughter is best friends with my best friend’s daughter. So while I’m already very involved with the family, and it seems like an easy “yes,” it is a challenge, because I have a busy job. I’m an oncologist. And because I want to fill this promise to Scott, I take it very seriously, and therefore it does cause a little conflict in my family.

AX: How is it playing the dad of a thirteen-year-old?

RICHARDS: Cool. Because my niece lived with me for a year-and-a-half. She’s twenty-two, but it definitely felt similar [laughs].

AX: So you have some practice.

RICHARDS: I do, yes, absolutely.

AX: Is there any difficulty in playing an oncologist, somebody who has to deliver bad news to people so frequently as part of his job?

RICHARDS: Ooh. Especially to my best friend and to a family that I’m so close to? Absolutely. I was so happy, too, that it becomes a storyline in the second episode, because I really thought about that, like, what would that really be like, if you were the doctor to your best friend’s husband? How would you look at her in the face? And Episode 2 is about, “I can’t look her in the face.” And for me as an actor, guilt is the hardest thing to play, so it was really challenging, it was difficult.

AX: Oliver is meant to be an influential man in the lives of Scott and Robin’s children. Are there influential men in your life?

RICHARDS: My father, for sure. Prior to receiving word that I got this part, my father was diagnosed with ALS. And so I got this role shortly after, and it’s a piece about me trying to save a father, and I put every ounce of feeling from my father’s situation into my performance, or I tried to. My father is doing well, but he’s lost his speech at this point. I didn’t always understand how much he gave me. But he really gives me my personality, and I’m just grateful to him for that. We threw him a huge seventy-fifth birthday party, so that was awesome. 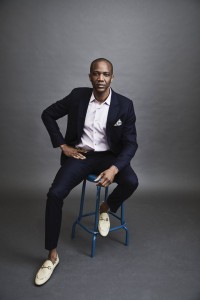 AX: Do you have a Halloween costume for the Halloween episode?

RICHARDS: I do! Yeah. Do you want me to spoil it?

RICHARDS: Really? So there’s this running joke that my character used to play football at Duke, and he’s always talking about it. And everybody’s like, “You’ve said that like a thousand times.” So I dress up in my old football uniform [laughs], because I want everybody to know that I used to play. He’s very proud of the fact that he played football at Duke, so he wants everybody to know it.

AX: To make a not-so-smooth segue from Halloween to vampires, ow that it has happened, can you talk about the twentieth anniversary of ANGEL, which was covered in Entertainment Weekly?

RICHARDS: Yes. Oh, my God. That was so hard to keep a secret. And I actually got rapped on the knuckles for even hinting at it. But David did it first. But there was something so beautiful for me about kind of ending that chapter with the twentieth year and then starting this new one. Not even ending it, but just commemorating it. Because this will be my sixth series, and the first one was ANGEL, and that was twenty years ago. There was something really awesome about SHIELD wrapping up as well, everything happening in 2019, so it was amazing to see everybody. I still love those people. We always laugh at casts who go, “Oh, it’s like a family.” Because we know, y’all don’t even like each other. But with ANGEL, twenty years later, we’re still good friends.

RICHARDS: Not at the moment. Just all about COUNCIL OF DADS, trying to make sure that it goes great.

RICHARDS: This show is about how family is only limited by your capacity to love. That’s all this show is about. It’s about a group of people coming together in a time of crisis to show up for one another. It’s heartwarming, it’s touching, it’s moving, and that’s what I want people to know.