ONE DAY AT A TIME: Actress Isabella Gomez on Season 4 – Exclusive Interview

The actress talks about the newly-arrived-on Pop TV series 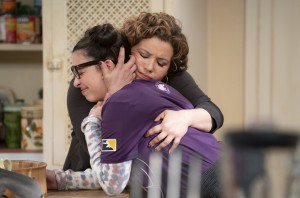 ONE DAY AT A TIME, created by Gloria Calderon Kellett & Mike Royce, broke new ground when it premiered in 2017. The original ONE DAY AT A TIME, which ran on CBS 1975-1984, created by Whitney Blake, Norman Lear, and Alan Manings, was a half-hour comedy concerned a white, divorced mom (depicting a divorced woman as a main character was controversial in those days) and her two teenaged children in Indianapolis.

The new ONE DAY AT A TIME is still a half-hour comedy, but the update introduces us to the Cuban-American Alvarez family. Justina Machado plays divorced mom Penelope, with two teenagers at home. Penelope’s opinionated mother Lydia Riera is portrayed by Rita Moreno. Original series co-creator Lear is on board as one of the executive producers.

Now ONE DAY AT A TIME is doing something new again. While it is no longer uncommon for streaming services to pick up and produce new episodes of series that have been dropped by their original networks (such as LUCIFER on Netflix and THE EXPANSE on Amazon Prime), ONE DAY AT A TIME may be the first series to be dropped after three seasons on Netflix and picked up by a cable network. Pop TV premieres the fourth season on Tuesday, March 24.

Isabella Gomez plays Elena Alvarez, Penelope’s out-and-proud adolescent daughter. Gomez won an Imagen Award for her performance in ONE DAY AT A TIME’s first season. The actress was previously a series regular on MATADOR, appeared in the film A CINDERELLA STORY: CHRISTMAS WISH, and has been part of the voice casts of BIG HERO 6: THE SERIES and STAR VS. THE FORCES OF EVIL.

ASSIGNMENT X: Did you look at the original ONE DAY AT A TIME at all to prepare for this series, or is this version so different that it’s like you might as well look at THE SOUND OF MUSIC?

ISABELLA GOMEZ: [laughs] I watched a couple clips, just to get an essence of Norman Lear’s shows and how they handled topics, but I didn’t want to imitate anything. It is so vastly different that there really was no reason to watch the whole thing like that just for this, but I did watch clips. 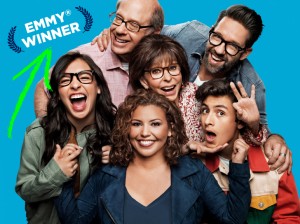 AX: How old was Elena in Season 1 of ONE DAY AT A TIME?

GOMEZ: She was sixteen [Gomez is three years older than her character].

AX: Do you try to remember what it was like to be three years younger than you are to play Elena?

GOMEZ: It wasn’t that long ago, and I do think that Elena is very mature for her age. But I definitely don’t try to act [younger] or anything. The way she thinks and the way she speaks is kind of [younger].

AX: The new ONE DAY AT A TIME is set in Los Angeles, but is mostly shot on the Sony Studios lot. Where exactly in Los Angeles is most of the series set?

AX: Are you originally from L.A.?

AX: Do you feel that ONE DAY AT A TIME captures L.A. life?

GOMEZ: I do. The thing is, I still feel like I’m learning so much about it. But especially with Elena’s activism and stuff, I do see a lot of that out here.

AX: Does the ONE DAY AT A TIME cast do anything to bond as a family?

GOMEZ: Well, we don’t do it to bond as a family. It’s a weird thing that we always talk about. But the moment we were on set, the first day, it felt like home, and it felt like family. But we do go to each other’s houses, and we go out to eat, and we love being around each other.

AX: Were you familiar with Rita Moreno before you were cast as her granddaughter?

GOMEZ: I knew of her, but I was raised in another country, so not so much. But I remember seeing her name attached to the project, and I was like, “Wait a minute.” I’m also awful with names. I know faces. But I remember IMDB’ing her and being like, “Oh, my God, no way.” I knew of her.

AX: How is working with her?

GOMEZ: Oh, amazing. Amazing as you would think. She is so talented in acting, and everything – technical, lights, how you stand, how to get your camera, all of that. You learn new things every day from that woman.

AX: Is there anything you’ve learned about Cuban-American culture that’s surprised you?

GOMEZ: I actually did not know that Cubans couldn’t get deported. I also learned that when we did those episodes [when Lydia was afraid of being deported]. I had no idea that that was the case, so I’ve learned a lot about that, and how they came over, which has been really interesting. 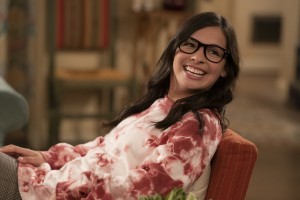 AX: How involved is Norman Lear with the production? He’s obviously one of the executive producers, but that doesn’t necessarily indicate how much he’s involved.

GOMEZ: Norman is here basically every day [laughs]. You see him all the time, and he’s in all of our notes sessions, he watches every run-through, and he is definitely vocal about his opinions, but like he’s said, it is Mike and Gloria that are sailing the ship.

AX: Is there any division of responsibility between Gloria Calderon Kellett and Mike Royce as far as character creation, or how they interact with the actors?

GOMEZ: Not at all. Both of them are pretty equal and separate everything equally.

AX: Is ONE DAY AT A TIME single-camera or multi-camera?

AX: Had you dealt with multi-cam before?

GOMEZ: I haven’t. This is my first multi-camera, which is really interesting.

AX: How is it different for you than single-camera?

GOMEZ: I think the audience is the biggest thing, and we get to be a little bigger. As a Latina, I’m always told that I use my hands too much, or I move too much, but here, not only because we are Latinos, but also because it’s in front of an audience and it’s a sitcom, it lends to being a little bit bigger. And also, being able to have the audience there is really, really special, and it just brings a different energy that becomes like another character.

AX: Do you think doing multi-camera with an audience is anything like doing stage?

GOMEZ: I’ve done a couple plays. It’s something like it, but I do feel more pressure on the stage than I do here, because even though we are in front of a live audience, if you mess up, you get to do it again [laughs].

AX: Whereas if you mess up on stage …

AX: Not asking for spoilers, but do you have any favorite episodes or scenes that we’ve seen so far?

GOMEZ: I do. [Season 1] Episode 5, “Strays,” is one of my favorite ones, and Season 2, I was really thrilled about that finale. I was excited to see everybody get their moment, and I was excited to be able to do it, because before this, I was a dramatic actress, and I thought that I would never do comedy [laughs], so I was really excited to be able to have that really emotional turmoil for Episode 13. It was so much fun to film, and it was just so eye-opening and beautiful.

AX: Are there any other TV shows you watch for fun?

GOMEZ: GREY’S ANATOMY is one of my favorite shows. I actually picked it out and binged all the seasons? It was an insane three months and now it’s my favorite show. I am going to cry when it gets canceled.

AX: What are your hopes for ONE DAY AT A TIME as it goes forward?

AX: And what would you most like people to know about the new season?

GOMEZ: That it’s just as touching, just as heartwarming, and just as funny, but there’s so much development in these characters, and they’re not going to be disappointed. I would like them to know that we are continuing to laugh on set, so hopefully, they will, too [laughs], and that we’re really proud of the work we’re doing this season.