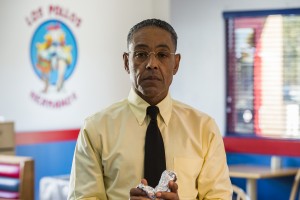 Giancarlo Esposito’s drug kingpin/Los Pollos Hermanos proprietor Gus Fring was one of the standout characters of AMC’s BREAKING BAD, earning the actor an Emmy nomination. It’s taken until Season 3 of BREAKING BAD’s prequel series BETTER CALL SAUL –AMC on Monday nights, starring Bob Odenkirk as criminal lawyer Jimmy McGill prior to his transformation into Walter White’s attorney Saul Goodman – for Gus to show up. Now we’re seeing Esposito play Gus as a less-established, younger man than he was in BREAKING BAD, even though it’s been six years since the actor last played the character.

Esposito was born in Copenhagen, Denmark (father from Naples, Italy, mother from Alabama, USA) and grew up in Manhattan, making his stage debut there at age eight in MAGGIE FLYNN. Since then, he’s been in an enormous range of film and television projects. Witness his current lineup in this exclusive conversation:

ASSIGNMENT X: How many different shows are you on right now?

GIANCARLO ESPOSITO: Oh, my goodness. I’m doing REBEL with John Singleton, just wrapped that up, I’d done the pilot and four episodes of that, also OKJA, just finished my second feature film as a director, called THIS IS YOUR DEATH, which [premiered] at the South by Southwest Film Festival. I’m really excited about that.

AX: Are you in that as well?

ESPOSITO: I am in that as well. It stars Josh Duhamel and Famke Janssen and myself and Caitlin FitzGerald, so I’m really, really excited. I’m developing a television show and a film as well, so it’s been a really wonderful time. I’m also doing a show, because you asked me how many shows, so I’m doing a show called DEAR WHITE PEOPLE for Netflix as well. That is the television show [version] of the film, [made by] the same folks. I have a really great role as the Narrator, and I’m also doing THE GET DOWN. So that’s four different shows. And ONCE UPON A TIME.

AX: Is it challenging to play the slightly less self-assured Gus Fring of BETTER CALL SAUL?

ESPOSITO: Yes, it is. It’s challenging in a way that keeps me present, in a very positive and wonderful way, because again, Gus is premature to where you’ve seen him, and so I like to play a character who is finding himself [on his way to becoming] what you already know him to be.

AX: Do they make you up to look younger than you did in BREAKING BAD?

ESPOSITO: Well, you know something about actors – when we know we have to be younger, the energy inside us starts to change. There is a certain, very minimal amount of aging younger that they do for me, but I’m very cognizant of the fact that, for my film, THIS IS YOUR DEATH, I gained twenty pounds, so it was a decision I had to make – is Gus going to be a heavier Gus before we met him when we meet him and catch up with him, or is he going to be in shape and fit and a thinner Gus? So I think weight makes a difference, I play with that, and I also play with attitude. Everything is in your attitude.

AX: And what can you say about your movie THIS IS YOUR DEATH?

ESPOSITO: It is an unflinching look at reality television, it’s a look at our world of technology and news media and how we’re manipulated into thinking what we think. So it’s very current and very timely, and I think people should really see it. It has a very strong impact on audiences, because little did I know it would be as current and present as it is.