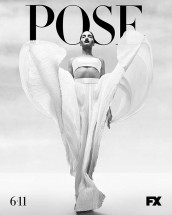 As the Season 2 finale comes to a close, the producer talks about the ground-breaking series 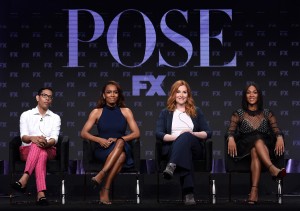 As FX’s POSE Season 2 draws to a close on Tuesday, August 20, plenty of characters are at a crossroads. It’s the ‘90s, and mainstream culture has had a glimpse of New York City’s transgender ballroom scene.

House of Evangelista mother Blanca (Mj Rodriguez) is facing empty nests, at home and at work. Daughter Angel’s (Indya Moore) modeling career takes off, as has her romance with Lil Papi (Angel Bismark Curiel), so both have moved out. Son Damon’s (Ryan Jamaal Swain) work as a professional dancer has taken him to Europe. Meanwhile, Blanca’s hard-won nail salon business has been burned to the ground, probably by nasty property owner Fredericka Patti LuPone). Blanca is also contending with an HIV-positive status, as is her close friend, ballroom commentator Pray Tell (Billy Porter). Blanca and Pray don’t even have each other to lean on at present, as they’ve had a falling-out over Pray’s affair with much-younger Ricky (Dyllon Burnside), once a son of House Evangelista. (Blanca thinks it’s wrong for a community elder to be romantically involved with a house “child,” even if that child is technically an adult.) House of Wintour mother Elektra (Dominique Jackson) is doing well financially, but she is still hiding a dead body in her closet. There’s a lot going on.

Our Lady J, a writer/ producer and occasional guest star on POSE, who previously worked in those capacities on TRANSPARENT, fills us in on all the happenings.

ASSIGNMENT X: When in the life of POSE did you come into it?

OUR LADY J: I came in right after the pilot was written, before the pilot was shot, last summer. I came in at the same time that [writer/director/producer] Janet [Mock] came in. [POSE creators] Brad [Falchuk] and Steven [Canals] and Ryan [Murphy] wrote the first two episodes together, and then they brought Janet and I in.

AX: Did you have any familiarity with the ballroom scene?

OUR LADY J: I did. I lived in New York from 2000 to 2010. My first ball must have been 2007, maybe-ish. A friend of mine took me to a ball at the House of Chanel, and it was in a rehearsal space in Chinatown. And I lost my mind when I went to this ball – the fashion, the performances, the confidence – I left a changed woman.

AX: How much rehearsal does it take to walk a ball? Because on the show, it seems like some of the participants are ultra-prepared, while others are more spontaneous …

OUR LADY J: It takes a lifetime. Trust me. I have never walked a ball – that’s one of my biggest regrets about leaving New York and never having walked a ball. I did walk the POSE ball. We had a POSE ball. Ryan walked, we walked. And it was so encouraging – and intimidating [laughs] – to walk with all of my colleagues.

OUR LADY J: No. The ballroom scene thrives in many cities, all around the world. It didn’t start in New York, but it quickly moved from city to city, and there are many great cities [with ballroom culture]. 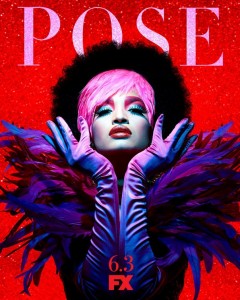 AX: Almost everyone we see in the POSE ballroom scene is Latinx and/or black. Was there a parallel white ballroom scene that we’re not seeing, and it subsequently became more integrated, or was it mostly a Latinx and black phenomenon at that time?

OUR LADY J: House of Field I know was a fashion house that did have white folks in it, and we haven’t explored that. That happened much later. We dealt with this [being primarily a people of color community] a little bit in Season 1, where we demonstrated the white gay bar, and the segregation with trans people and people of color. And that was the case in the ‘80s. The ‘80s brought around the ballroom scene because of segregation in the community, because people of color were not invited to white spaces, and were ostracized within the LGBTQ community. So the ballroom really was birthed by people of color, and that’s why you see so much talent in this scene comes from a diverse community. It’s a question of racism and transphobia.

AX: How different and how similar are the issues for gay men and for trans people?

OUR LADY J: That’s a question that varies depending on the person. [Age] twenty-six is when I first started letting people know that I was going to adapt female pronouns. I think my gender is more complicated than that. But before that, I came out as gay. So I personally had identified with the queer community for most of my life. It really depends on when someone comes out, and the time, the period of the ‘90s, when I came out originally, really affected my queer identity. So that really varies, person to person. But the important thing to know is, there is a big difference between sexuality and gender. Even though sometimes those two things overlap.

AX: In Season 1, there were several heterosexual cis-gendered white main characters who had storylines. Those characters do not appear in Season 2. Did their inclusion in the first season seem like something POSE felt it had to do to start out by introducing itself to a larger audience, and then didn’t have to do in Season 2, or did the show naturally gravitate away from that?

OUR LADY J: Well, any time that you have a show that shines light on a community that has been kept in the dark for so long, you’re going to have to do some educating. And I think by incorporating hetero-normative storylines into Season 1, it was a way of building a bridge with our audience. It wasn’t necessarily about getting more numbers, but it was about bringing folks in, and taking folks on a ride. And the more we go, the more nuanced conversations we can have.

AX: In writing the show, is everybody in the writers’ room going, “Well, I remember this happened to me,” and everybody is putting in scenes from their real lives?

OUR LADY J: Absolutely. It’s definitely personal stories for all of us in the room. I’m forty-one years old right now, and at twenty-five, I found out I had HIV, and so my HIV diagnosis inspired me to be me, and inspired me to live, and to thrive, and to have the career that I have today, and it inspired my transition. Because suddenly, I saw my mortality. And that happens with Blanca, in that she finds out she’s [HIV] positive, and she’s like, “Okay, starting a House, living my life. This is no one’s life but mine. I’m going to live it.” And so all of us bring our experience to the room, and I’m particularly passionate about HIV/AIDS storylines.

AX: Can you talk about Blanca’s reaction to Pray Tell’s involvement with Ricky?

OUR LADY J: She’s a mother. Blanca’s a mother. Even when kids in the ballroom – I say “kids,” the younger generation – even when the younger folks move from house to house, there’s always a relationship that they have with their mothers. As we see, Blanca still has a relationship with Elektra that is very mother/daughter, even though they’re at each other’s throats sometimes. So Blanca’s motherly love comes out, and it creates a real conflict between her and Pray Tell. She’s a great mother. I would want to have her as my house mother.

AX: This season, you’re playing piano for Mj Rodriguez and Patti LuPone in an AIDS benefit cabaret scene. How did that come to pass?

OUR LADY J: Oh, I was a classical pianist for many years, before I got into television. And then I played for pop singers. My last touring gig was with Sia as a pianist, and then I went to TRANSPARENT. And so in every show that I have done so far, I’ve been lucky to have these weird little cameos as a pianist. It always starts as a joke in the writers’ room, like with TRANSPARENT. I play piano as well. It’s just something I love to do.

AX: Which episodes did you write this season?

AX: Is Episode 6 the one with the cabaret?

OUR LADY J: Yes. I love writing the musical scenes.

AX: Are you pushing for more cabaret scenes?

OUR LADY J: Well, I very much go with the flow of the room, and we all love music, and music is such a big part of the show, so it’s nice when we can have live performances, so we’re all on board.

AX: How much has the POSE writers’ room changed between seasons? Same people?

OUR LADY J: Same. Yeah, there are five of us – Ryan, Brad, Steven, Janet, and myself.

AX: Now, it sounds like nobody’s made a determination of exactly when Season 3 will take place, but with your knowledge of history, what would you say would be the next big thing for the ballroom community after “Vogue”?

OUR LADY J: We’ve had conversations about it in the room, and it’s to be determined right now.