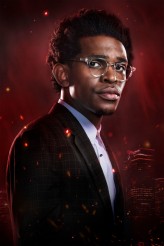 The actor talks about being part of television's DC-verse 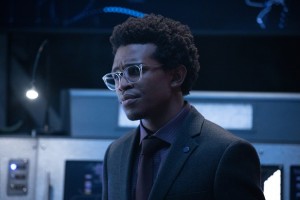 In The CW’s latest DC-verse series BATWOMAN, now in its first season on Sunday nights, Camrus Johnson plays Luke Fox. Luke is the young techno-whiz who works with Batwoman/Kate Kane (Ruby Rose), much as his father Lucius Fox was the main gadget man for Kate’s cousin Batman/Bruce Wayne.

Johnson, originally from Georgia, moved to New York to pursue his acting career. He has also produced and written several short films. Johnson’s other screen acting credits include the series UNPRODUCTIVE, THE COBBLESTONE CORRIDOR, THERE’S … JOHNNY!, and LUKE CAGE, and the films PATERNO and THE SUN IS ALSO A STAR.

Asked how Luke feels about Kate donning the Batsuit and taking on the Batwoman mantle, Johnson replies, “I’m not sure he has much of a choice, to be honest. I think Luke more than anything wants to make sure that Gotham is safe and, with Batman missing, someone stepped up and is willing to put on a suit. And even if it takes a bit of convincing, where, “You don’t have to be Batman, but if you are going to wear my suit, then you are going to do something for the city,” I think it’s going to take awhile for them to be exactly eye to eye. I say, “Don’t touch that,” and she touches it anyway. But then, when she touches it, she saves the city. And I’m like, “You were right.” So there’s a lot of tension there, but I think it’s a very brotherly/sisterly relationship. Once second, I’m the big brother, and the next second, she’s the big sister. And eventually, I think that’s the reason that they have to sort of become besties and on the same page, because they are already sort of like family.”

ASSIGNMENT X: Since Luke Fox is obviously related to Lucius Fox, did you look at any of the previous Lucius Foxes to play Luke?

CAMRUS JOHNSON: I read quite a bit of the comic books, I’ve seen some of the animated series and animated films. With Lucius Fox, there are so many different types of Lucius that I just have to keep my own version in my head. There’s some Morgan Freeman inspiration in there, you know what I’m saying?  You can never go wrong with Morgan [laughs]. But the one that’s in my head for my Luke Fox may be a little different.

AX: Have you had to learn how to do anything in order to play Luke?

JOHNSON: [laughs] Not quite yet, because Luke Fox, his understanding of technology is way more advanced than mine. I’m getting my own virtual reality gaming system soon, but it’s very different. So I don’t have to learn anything that Luke Fox has to know. I’m sort of learning through him. 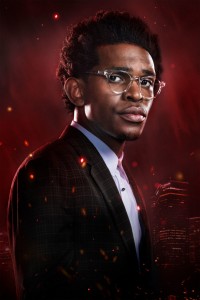 AX: BATWOMAN shoots primarily in Vancouver, with some location work in Chicago. Are you enjoying working in those places?

JOHNSON: Well, right now, I’m working on getting the cast together. I became friends with some people from SABRINA, some people from ARROW, some people from NANCY DREW [all CW shows that shoot in Vancouver], and we kind of just come together, grab lunch, grab dinner. The BATWOMAN cast has gone on adventures together a couple of times. We’ve gone to Lynn Canyon Park, which has this suspension bridge. We’ve gone on a boat on the open water, fun things like that.

AX: What would you most like people to know about BATWOMAN?

JOHNSON: About BATWOMAN? It is a lot funner than you might expect. It’s even darker than you assume, and it’s a lot of fun.