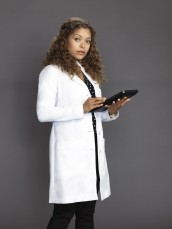 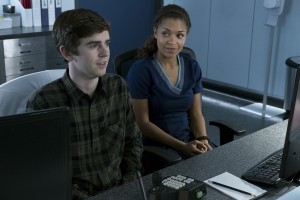 In ABC’s new Monday-night drama THE GOOD DOCTOR, Freddie Highmore plays Dr. Shaun Murphy, a first-year surgical resident who is exceptionally intuitive as a doctor and who is also autistic.

Antonia Thomas plays Dr. Claire Browne, a fellow surgical resident who befriends Shaun. Thomas is known for her work in MISFITS, SUNSHINE ON LEITH and HOMEFRONT. Like costar Highmore, Thomas actually hails from London, England, but is playing an American for THE GOOD DOCTOR.

ASSIGNMENT X: Does the American accent come to you easily, or did you really have to work with somebody to get it down?

ANTONIA THOMAS: I think as a Brit, you grow up watching Hollywood movies from Day One, so the American accent has always been something that, in a general way, has come pretty easy to me. I’ve worked with somebody to finesse it, little sounds, but I actually really enjoy working in accents.

AX: Is Claire Browne a peer of Shaun Murphy? You look more senior – but then, Freddie Highmore looks extremely young.

THOMAS: I’m a peer. I’m a resident surgeon, and yes, he comes in as a resident as well. I think in terms of my relationship with Dr. Shaun Murphy, I instantly as a character connect with him and realize that he’s a brilliant surgeon, aside from his autism, which does not define him. I feel like he is very much meant to be a part of the hospital and deserves his role there. So I think that my character kind of becomes an ally for him.

AX: Claire has some trepidation about Shaun’s autism, but it seems like she gets over it fairly quickly. Was that transition fun for you to play?

THOMAS: Yes, definitely. I mean, I think instantly, for Claire, just because he has autism, there was no trepidation there. I think the thing that fascinates her immediately is that he is a brilliant doctor, and she can see that he’s a person, and I think maybe because of his autism, and because he sees the world in a different way, he’s able to cut through all of the stuff that people do. He calls her on her behavior. He says, “You were nice to me one minute, you were mean to me the next. Which is the real you, why are you being fake?” I think that’s intriguing for her, instantly. She’s like, “Okay, this is somebody that’s direct.”

AX: How brilliant is Claire as a surgeon?

THOMAS: She’s young and she’s learning. It’s her first year as a resident, she has a really tough boss, but she could be brilliant. She wants to be brilliant.

AX: Did you do any research on your own into being a surgeon, or did they train all of you in, “This is how you hold a scalpel, and …”?

THOMAS: [laughs] We all did our own research. I read some books – I read a really interesting book by a seminal British surgeon called Henry Marsh, a brain surgeon. But we also got a little bit of training, to look like we knew what we were doing, and try and understand what we’re doing. But people train for eight years to be doctors [laughs]. We’re going to do our best, but …

AX: How far along is Claire in her training?

THOMAS: Yeah, I’ve got a show on Netflix called LOVESICK. The third season of it is airing. It’s very different to this, which I like – I really enjoy the challenge of playing different roles.

AX: And what would you most like people to know about THE GOOD DOCTOR?

THOMAS: That it is a different show from a lot of shows that I’ve seen recently, because the leading role is a man who has a neuro-diverse condition, and that is unusual, and it’s a platform for the dialogue about autism. Hopefully, anybody with a difference can relate to the show and see that they can achieve whatever they want to achieve.