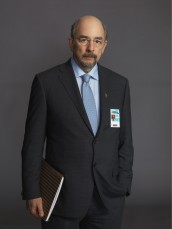 The actor talks playing a mentor 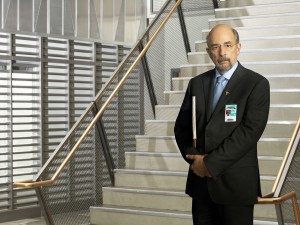 HOUSE creator David Shore has a brought forth another drama about an unconventional physician. In ABC’s new Monday night series THE GOOD DOCTOR, Freddie Highmore stars as the title character, Dr. Shaun Murphy. Shaun is a brilliant young surgeon working on his residency, but he faces challenges internal and external due to the fact that he is autistic.

Shaun’s mentor, Dr. Aaron Glassman, is portrayed by Richard Schiff. Schiff won an Emmy Award for his performance as Toby Ziegler on the long-running THE WEST WING. The actor, originally from Maryland, is also known for his work in a multitude of films and TV series, recently including DIRK GENTLY’S HOLISTIC DETECTIVE AGENCY, ROGUE and a currently recurring role as Brett Anderson on HBO’s comedy BALLERS.

RICHARD SCHIFF: I’ve known him I think since he was fourteen, is how the story goes.

AX: Where is Shaun in terms of his education?

SCHIFF: I think he jumped ahead, based on the pilot. He read medical books when I was taking care of him as a kid, so he had a head start in terms of his knowledge, the vacuum-cleaner brain that he has.

AX: Prior to encountering Shaun, was Glassman looking to mentor somebody, or was this really because of the particular situation with Shaun?

SCHIFF: No, I don’t think he was looking to mentor anybody. The story takes place in Wyoming, so what I’ve decided is that he was doing clinical work in Wyoming and came upon this young boy and just something registered in Dr. Glassman, and it doesn’t happen the first time he meets him. [He doesn’t immediately respond with], “Oh, this kid’s in trouble, I think I’ll help him.” There are a series of steps that take place.

AX: Does Shaun provide something that’s lacking in Glassman’s life? Does your character not have kids, or are his kids unresponsive to him, or …?

SCHIFF: Yeah, I think that, if you had asked me at the beginning of THE WEST WING my [character’s] personal history, it would be different than what actually ended up happening, because the writers will come up with an idea and decide that I have an ex-wife, for instance. But I know what my situation is, and yes, there’s a personal situation that maybe Shaun will fill the void that exists in Dr. Glassman.

AX: How does THE GOOD DOCTOR this fit with the rest of your work schedule?

SCHIFF: BALLERS is continuing, and I just started COUNTERPART, which is a great new show on Starz with J.K. Simmons and Olivia Williams, and they wanted me to be a regular on the show, so that was why this was such a huge decision for me. But I think part of the situation is, I’m going to be allowed to continue on BALLERS, at least next season, and some on COUNTERPART as well. COUNTERPART had a big plan for me. I don’t know how they can adjust, because I can’t do all their shows. BALLERS is very adjustable – we’ve already come up with a great idea for the character, so I wouldn’t have to be in as many as they originally wanted me for, and it’s really, really important to me that I don’t do one thing. It’s the only downfall for me with my experience on THE WEST WING is that it was ten-and-a-half months a year, and I got asked to do stuff on my break, and with the schedule, I couldn’t do theatre, I couldn’t do these other projects. A few I got to do, and variety is really, really important. So BALLERS is high comedy this year, which I absolutely loved and had a blast doing. COUNTERPART is intrigue, and this [THE GOOD DOCTOR] is straightforward drama, and I need to do all of it [laughs]. I don’t mean to be greedy, but I really like to work.

AX: If you’re in a show for multiple seasons, do you prefer your character to be sort of devious, as on BALLERS, or do you to prefer to play a more heartfelt person, like Glassman on THE GOOD DOCTOR and Toby on THE WEST WING?

SCHIFF: I prefer good characters. But I’ve already done how many seasons of BALLERS, and that character is certainly different than the heartfelt kind, though I think he has a heart, which might be revealed this year. But it’s easier in many ways, because it’s more fun, to do bad guys. I did ROGUE for two seasons, which no one saw, but I loved the character. And that was fun. It gives you a freedom, it gives you a power. And here the work is more delicate. It takes a little more time.

AX: From the outside, it looks as though you’ve been working very consistently since THE WEST WING. Does it feel that way to you?

SCHIFF: No actor ever feels like, “Fine.” That never happens. It feels jumbly, so to speak, because there are things I want to do that I can’t. I’m offered a play in London, I’m offered a play on Broadway, and I can’t do it. And my heart breaks, because I want to do everything that is moving to me. And there was one play that was so beautiful, a new play, that I just couldn’t squeeze in, and I think about it every day. So it never feels like, “It’s fine now.” Because there’s stuff your heart wants to do. That’s why this is such a difficult choice for me.

AX: What would you most like people to know about THE GOOD DOCTOR?

SCHIFF: I don’t know. I like to be surprised by how audiences respond. I never want to expect, or give them expectations. If they like what they’ve heard, they should watch it, and hopefully they’ll enjoy it and keep watching.