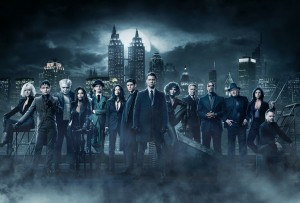 In Season 4 of GOTHAM, on Fox Network Thursday nights, the titular city is teetering on the brink of chaos. Youthful Bruce Wayne (David Mazouz) has secretly started fighting crime, but has not yet become Batman. Dedicated cop and future Batman ally Jim Gordon (Ben McKenzie) is now captain of the GCPD, but secrets weigh heavily on his soul. The latest threat to the locals: Jerome Valeska (Cameron Monaghan), leading up a band of dangerous escapees from Arkham Asylum, threatens to drive the city into madness.

John Stephens, who has been an executive producer on GOTHAM for its entire run and served as showrunner for the past two seasons, talks about where the series may be going, and how long it will take Bruce to truly become Batman.

ASSIGNMENT X: At the end of Season 3, Bruce Wayne had donned a costume to do some vigilante activity, but it seems he’s still not ready to be Batman just yet …

JOHN STEPHENS: No, he’s not quite turning into Batman. It’s a long journey, you know? You can see the Batman DNA. It’s definitely there.

AX: So he can’t actually become Batman until the show is ending?

STEPHENS: I would say perhaps the last scene of the show would be Bruce putting on the cowl?

AX: On a scale of one to ten, can you say where Bruce is at this season in his Batman evolution?

STEPHENS: That’s a difficult question, because I don’t know how many seasons we’re going to end up doing [laughs]. I would say he’s crossed the tipping point. In many ways, [when] you tell a story about a teenager, you’re always telling a coming of age story. And in any coming of age story, everybody’s lives have these crossroads points where they could go this way, you could go to law school, you could become a dancer, and at a certain point, you make a number of choices that [make it so] you could only end up a certain way. And I think Bruce has passed that point. For now, there’s no other course for him but to be Batman. And so every step that we see him going forward is going to take him further along that journey.

STEPHENS: Well, it’s odd. It’s never been conscious, honestly. I would just say, year by year, we just age it up a year as we go, and that’s kind of been on track with where David has been, both in terms of the normal teenage “I’m experiencing this when I’m a fourteen-year-old, fifteen-year-old, sixteen-year-old,” and also physically, when he looks more and more and more like a man, and what he’s capable of doing stuntwise, et cetera. 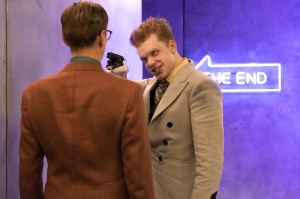 AX: At what point did you know that Oswald Cobblepot, aka the Penguin, as played by Robin Lord Taylor, was going to turn out to be so sympathetic, kind of an antihero rather than a villain?

STEPHENS: I would say the very first scene I saw Robin do. There is an element of such humanity in him at the very beginning, where he wanted it so badly – success, ambition, and power – and you understood why he wanted it, that you’re going, “I want that guy to win.” The fact that you have a villain who you’re rooting for so badly, I was like, “We can get him to do almost anything.” It was great. He’s such a gift.

AX: Ra’s al Ghul, as personified by Alexander Siddig, is the leader of the League of Assassins. He got Bruce to stab him, but the character keeps returning, even though his power has apparently been transferred to underworld boss Barbara Kean, played by Erin Richards.  Do you know how long Ra’s al Ghul will be with GOTHAM?

AX: Did you have to make significant alterations to storylines or individual episodes due to either Morena Baccarin’s real-life pregnancy or Donal Logue’s need for time off this summer?

STEPHENS: Not really. One of the beauties of having fourteen series regulars is, we have a lot of players on the team. So at any particular moment, we’re always saying, “This person has a big story now, and this person’s going to be having a big story while they take a rest, this person is going to have a big story now.” So except for Bruce and Jim Gordon, we’re constantly giving people time off. So it worked out really well for us.

AX: It seems like Morena Baccarin’s character Lee Thompkins keeps leaving Gotham City and then coming back in unexpected ways …

STEPHENS: I do feel like Gotham has the gravitational pull of a black hole. It even pulls light into it [laughs], so …

AX: How would you say GOTHAM has changed over the seasons? Obviously, it’s gotten darker, but do you feel the show has changed thematically at all?

STEPHENS: Hmm. To a degree. I think Year 1, we walked a bit more of that balance between procedural and standalone episodes and serialized. We became a really fully serialized show in Season 2, and we’ve hewed to that ever since. I’d say we also walked more into that world of mixing the comedy with the violence with the gothic element, so we found our tone much more, but I don’t think the tone has necessarily shifted that much. I do think we experienced a tonal shift at the start of Season 2, and I don’t think that’s really evolved since then. I think we’ve kept that new tone, a mixture of the comedy, the violence, the gothic elements of the show, the large comic book feel, since the start of Season 2. 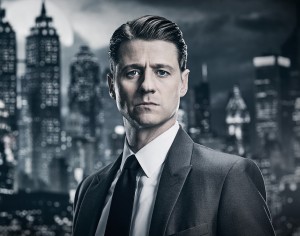 AX: Do you all of the plotlines have to converge by the end of a season?

STEPHENS: Well, it’s always nice. It makes things feel like they’re mounting in a way, but there are always some plotlines that don’t necessarily converge by the end of the season. But the idea is, we’re building a panoramic show. So all these people theoretically live in Gotham. So all their storylines will continue forward and eventually converge.

The X List: Horror For the Holidays - Ten Christmas Films That Will Di...
CD Review: BATTLE BEYOND THE STARS (1,000 Edition) Soundtrack
TV Review: ONCE UPON A TIME – Season 2 – "The Miller's Daughter&q...
Interview: GRIMM co-creator David Greenwalt gives the Season 4 scoop