And they all kept on keepin’ on … 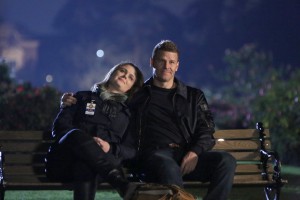 Some TV series, which shall go nameless here to avoid giving fame to the guilty, have endings so awful that it feels like the creators want to punish the audience. Rarely, TV series have endings that are so perfect that we reflect on them in quiet awe for days afterwards (JUSTIFIED, may your praises be sung for a thousand years).

After twelve seasons, BONES resolves itself with the BONES: THE FINAL CHAPTER finale, “The End in the End.” While not as sublime as the very best of series’ closures, “The End in the End” honors the spirit, the tone, the characters and the audience of BONES. We get tension, suspense, affirmations of love and friendship – and the sense that our friends here will go out of this story and into another.

Things certainly look dire as “The End in the End” opens, with the lab in smoking ruins after multiple bomb blasts and a number of characters on the floor amid the rubble. Booth (David Boreanaz, who also directed “The End in the End”) wakes up and immediately begins calling for “Bones,” aka his wife, Dr. Temperance Brennan (Emily Deschanel). Hodgins (TJ Thyne) awakens and starts calling for Angela (Michaela Conlin), who soon answers. Booth finds Brennan unconscious but breathing. He rouses her to consciousness – she feels something is different and wrong with her.

District attorney Caroline (Patricia Belcher) and Booth’s FBI partner Aubrey (John Boyd) both see the explosion on the news. Aubrey heads over to the lab. Cam (Tamara Taylor) and Arastoo (Pej Vahdat) meet him outside, very worried. They escaped, but know that their friends were trapped inside.

Booth and Hodgins begin searching for a way out, while Angela and Brennan put together a makeshift fetal monitor to make sure Angela’s unborn child hasn’t been killed by the explosion. The good news: the baby’s heartbeat is there. The bad news: Hodgins had learned out to make the monitor from Brennan’s instructions long ago, but Brennan now needs to be told how it works.

Booth starts freaking out so badly that he wants to use the remnants of the explosives to blow a hole in the wall. Hodgins has to talk him down. Sure enough, a rescue unit breaks through. Cam and Arastoo, helping treat other victims, are relieved to see their friends.

Cam detects that Brennan is showing signs of brain damage. Her memory is intact, but her ability to process complex ideas has been affected. Despite this, Brennan insists on going back to what’s left of the bone room. She can’t remember what she was working on right before the blast, but knows it was important.

Bones, not surprisingly, are everywhere. It’s all hands on deck – with not only Cam, Hodgins and Angela, but also lab assistants Arastoo, Clark Edison (Eugene Byrd), Daisy Wicks (Carla Gallo), Wendell Bray (Michael Grant Terry) and Jessica Warren (Laura Spencer) all pitching in. Brennan remembers little moments with each of them, but not how to do her job, much to her distress.

Angela made a protected backup drive in case of disaster – turns out she was listening when Hodgins spouted all of his conspiracy theories. She and Brennan go through photos of Cam and Arastoo’s wedding and see a waiter holding Cam’s purse. The waiter must be how the vengeful Kovac got Cam’s lab card key and was able to plant the bombs.

Booth and Aubrey interrogate Kovac’s wife Jeannine (Brit Shaw) once again. The phone she had given them earlier provided a fake location for Kovac, suggesting a set-up. Still, Jeannine passes a polygraph when she denies that she doesn’t know where her husband is.

Brennan, unable to think the way she normally does, is having an identity crisis. Booth reassures her that he loves her no matter what and that she’s still a brave, wonderful human being.

The waiter who stole Cam’s card is found murdered. His background suggests he couldn’t have planted the bombs, and Kovac was otherwise occupied at the time, so who did it? DNA recovered from the one bomb that Booth disarmed shows that it was handled by a female relative of Kovac. The team realizes that Jeannine must really be Kovac’s sister, not his wife.

Brennan accompanies Booth into the interrogation room. Without her usual filters, she screams at Jeannine in fury. Jeannine finally admits that, yes, she’s Kovac’s sister. Like Kovac, she witnessed Booth shoot their father twenty years ago.

Booth tells Brennan that he didn’t just shoot Kovac’s warlord father out of duty. He made a choice. Brennan is proud of Booth for acknowledging this, and feels he made the right choice.

At the lab, all of Brennan’s former interns are putting what she taught them into practice. Examining the remains of Kovac’s fellow prison escapee again, the team finds that his bones are lighter than they should be. This is an indication of childhood lead poisoning. It’s guessed that Kovac learned where the other man lived, killed him, and is now using that house as a hiding place.

The lab in Georgetown donates a lot of equipment to the Jeffersonian so that it can (more or less) get back up and running. Hodgins and Angela find a site in West Virginia where there was lead contamination and track Kovac to a farmhouse.

Brennan insists on accompanying Booth, Aubrey and a SWAT team on a nighttime raid. The farmhouse is in fact a compound. There’s a shootout, with casualties on both sides. Kovac jumps into a jeep and clips Booth, injuring the FBI agent’s hand. Seeing Booth in pain, Brennan remembers what kind of injury it is and what to do about it. She snaps the dislocated bone back into place. This enables Booth to shoot at Kovac’s jeep. The jeep plummets into a pit filled with explosives and blows up.

In the aftermath, Caroline scolds Booth for his death-defying actions, though obviously she approves. Booth is unlikely to change his ways.

Aubrey decides he’s staying in D.C. after all; he has been offered a local promotion. This doesn’t mean he’s getting back together with Jessica, though. FBI therapist Karen (Sara Rue) has bought him a lot of fried chicken in consolation. Aubrey offers to share it with her. Perhaps this is the start of something new for them both.

Brennan comes back to the lab, having received an all-clear from her doctor. She is back to normal. The lab will be undergoing a few weeks’ worth of reconstruction, so Cam tells everyone they should clear out their belongings to make sure nothing gets lost or accidentally thrown away.

We see pictures of characters who’ve passed away – Vincent Nigel Murray, Max, Lance Sweets on the jacket of the book he wrote about Brennan and Booth (one of the most unprofessional, unethical actions ever committed by a fictional shrink, and BONES keeps returning to it, an occasion for one last “Auggh!”). Hodgins also takes home a photo of himself and Zack.

Angela and Hodgins find that their secret project survived the blast intact: they’ve done a children’s book, written by Hodgins and illustrated by Angela the artist, depicting all their friends as bugs. There’s Brennan the beetle, Cam the centipede, etc. Everyone is appropriately charmed and delighted.

Camille now announces that she and Arastoo aren’t really going on a six-month honeymoon to Europe after all. Instead, they’re going to Mississippi to adopt a trio of young brothers. Cam and Brennan have conferred on who should be in charge of the lab in Cam’s absence: Hodgins. Hodgins is thrilled. He is at long last really King of the Lab.

When Brennan is alone with Booth, she tells him she’s going to keep her clock, which stopped at the moment of the blast. It’s a reminder of when things almost ended, but didn’t.

And that’s it. Everyone is alive, happy, surrounded by people they love and work that gives them purpose. Nobody does something out of character, or self-destructive, or mean-spirited. We feel a sense of completion, without the show shoving us out the door. We’re free to imagine more adventures for the characters (they’ll certainly be having them), but we also don’t feel like any major issues are left unaddressed.

Well, except for one. There’s still that tape left by the late Christopher Pelant at the end of Season 10. So if BONES ever wants to go the reunion route, it won’t have to look far for the source of a new mystery. Meanwhile, on the whole, it’s been a pleasure.