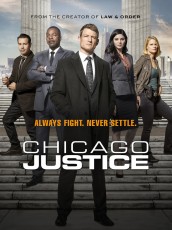 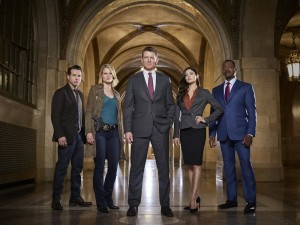 Michael S. Chernuchin, who serves as one of CHICAGO JUSTICE’s executive producers and show runner, talks about the thinking that goes into the new series.

MICHAEL S. CHERNUCHIN: Well, now it’s triple life off the table. But we have one case where we send someone to Indiana.

AX: Seeing that they are both law and order-based shows, is JUSTICE now the logical place to cross over with SVU?

CHERNUCHIN: That would be great, and we would love to. I think I have a case in the back of my mind that would get them out to Chicago. Not this season. Hopefully next season.

CHERNUCHIN: We knew from the get-go that [Peter] was Ben Stone’s son.

AX: Michael Moriarty, who played Ben Stone on the original LAW & ORDER, is still alive, but it sounds like he’s unlikely to make an appearance …

CHERNUCHIN: No, he’s not going to make an appearance. But I think it’s more dramatic, the idea of him hanging over [his son Peter], and we have one episode where he really looms hard. The others we wanted people that we met in the S.A.’s office that would resemble the real thing. We try to do a grounded show – other than, you don’t meet Carl [Weathers] anywhere [laughs].

AX: With the casting for this, were you looking for somebody particularly iconic, like Carl Weathers, to be the head of the D.A.’s office?

CHERNUCHIN: No, I wasn’t there when Carl was picked. I came in post-that. But I think we just wanted a good actor – a recognizable face helps – and he’s filling the shoes of Steven Hill, which is pretty hard. His [character’s] back story [is], he was a cop, and was going to law school while he was a cop, and then worked in a huge law firm. There was an opening – nobody was running against the Daley machine. This will all come out in the show. And he said, “Why not me?” And he took it. And he’s basically a politician. That’s what that job is.

AX: But when somebody turns on the TV, the likelihood is that they’ll recognize Carl Weathers …

AX: With Monica Barbaro, were you looking for somebody that young to play a lawyer?

CHERNUCHIN: Yes. We wanted a millennial. We wanted someone that would bring that perspective, we didn’t want it to be an old farts kind of show, and that’s what she does. She’s always giving us that point of view. What we want to do in this show, a perfect show would be our six characters all having different opinions about the issue, and they’re all right. So we wanted to get people with different backgrounds, who would come from different places. Now, that has never been achieved. We’ve come close to having everybody have different opinions, but that’s what we’re working for. We want to hit everybody’s opinion out there, and not choose.

AX: Do you and the other CHICAGO series show runners get together and talk about what works on a continuing basis, and what not to do?

CHERNUCHIN: We get together for a minute and a half on the crossovers, or if I need to know, “Which one of your characters would do this?”, they’ll tell me and give it to me.

AX: Because they’re all different disciplines – the fire department, the police department, the hospital, the prosecutor’s office – is there even a danger of having the same type of story on more than one show?

CHERNUCHIN: There are people that will tell us, “Oh, they’ve done that,” so we wipe it all. We attack the same facts from a different perspective. All they have to do is arrest somebody on P.D. We have to convict them. So you can take the same case and, from our point of view, it’s a completely different show.

AX: But you don’t have a problem with, they did this sort of a plot on CHICAGO FIRE, so don’t do it on CHICAGO JUSTICE?

AX: Is that one of the most challenging aspects of this show?

CHERNUCHIN: It is challenging, but a lot of things like – they will say, for example, there’s this thing in Chicago, the “Heat List,” it’s called, where they actually, with a computer algorithm, predict who’s going to commit a crime. It’s an amazing thing. And it works. They mentioned it in P.D. – we did an episode about the whole thing. So we look at things differently, because our job is different. And we’re all reading the same newspapers [laughs].

AX: CHICAGO JUSTICE still has the ripped from the headlines nature of all other Dick Wolf shows?

AX: Are you involved at all in the other CHICAGO shows, or are you all CHICAGO JUSTICE, all the time?

CHERNUCHIN: We’re in the building. They will call us with legal questions, that kind of thing.

AX: What would you most like people to know about CHICAGO JUSTICE?