Home » Bones Review The Hope in the Horror

A lot of A plot packed into an hour 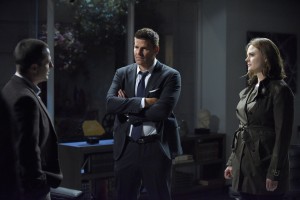 BONES starts its twelfth and final season with a relative bang in “The Hope in the Horror.” Unlike most BONES episodes, “Hope” has very little in the way of subplots. The first bit of the episode has all hands on deck seeking the kidnapped Dr. Temperance Brennan (Emily Deschanel, who makes her episodic directing debut here). Once she is located, Brennan, her husband FBI agent Seeley Booth (David Boreanaz) and the rest of the gang zero in on whether or not Brennan’s abductor, former Jeffersonian lab assistant Dr. Zack Addy (former BONES regular Eric Millegan) is really a serial killer.

Zack insists that he is innocent of the crimes of the Puppeteer, as the killer is known. He wanted to shoot himself up with truth serum in front of Brennan, the person whose intellect he most respects. There are different schools of opinion on Zack’s guilt. Booth is so furious that Zack kidnapped Brennan – even though his motive was to clear himself – that the FBI agent is sure Zack did it. So is Hodgins (TJ Thyne). Then Angela (Michaela Conlin) finds that Zack has been digitally spying on all of his old colleagues (except Booth, who Zack doesn’t much like). Zack pretended online to be a neurosurgeon – he’s the one responsible for Hodgins getting feeling back in his legs.

Hodgins is so grateful to Zack that he rethinks his position on whether his old workmate is a killer. But Zack apologizes to Hodgins, saying that the feeling in Hodgins’ legs is likely temporary. Zack wanted to give Hodgins hope. Sure enough, by the episode’s end, Hodgins has lost any use of his legs again.

The sudden reappearance of FBI profiler Karen Delfts (Sara Rue) seems suspicious, as she had transferred to Kansas City but has come back quickly. Brennan even suspects Delfts may be the killer, but it turns out Delfts had a lecherous boss in KC. She decked the guy and returned to D.C.

Another suspect is Brennan’s therapist, Dr. Falk (Tim Guinee). Falk failed to mention that he’d been in contact with Zack. He denies being the killer, but warns that it is likely someone close to the case.

Brennan and lab assistant Wendell Bray (Michael Grant Terry) go searching for clues, and find the skeletal upper half of a fourth victim of the serial killer.

Zack was so distraught by the death of Dr. Sweets that he injured his head, creating a brain injury. After Brennan and Zack finally get to speak with one another, both are convinced that Zack must have committed the murders during the blackouts that he’s experienced since his head trauma. Zack requests that he be put in the maximum security wing of the mental hospital where he has been confined for the past decade (but has managed to escape almost nightly and then break back in before being discovered).

Wendell finds a bit of extra bone on the new remains. He and Brennan realize that the upper half of the skeleton is actually part of a conjoined twin. When Angela does a facial reconstruction, the team realizes that the killer is actually Dr. Roshan (Ravi Kapoor), the head of the facility where Zack is being kept.

Indeed, Dr. Roshan tries to administer a lethal injection to Zack. Zack fights back, but cannot kill Dr. Roshan, even to save his own life. Fortunately for Zack, Booth shows up and shoots Roshan before Roshan kills Zack. Zack is now convinced he can’t be the killer – he couldn’t take another life even to save his own. He also now wants to be exonerated for the murder that got him locked up in the first place, as he is innocent of that crime as well.

As BONES Season 12 is its last year, and is only twelve episodes long, it’s great that the team has opted to bring back old friends, starting with Millegan’s Zack. The interplay between him and Thyne’s Hodgins was great fun back in the day. The two don’t get much time together in “Hope,” but with the plot thread of Zack’s exoneration, it seems likely the pair will get more scenes in the future.

It’s also good to see Brennan balancing between fondness for Zack and her unique formal manner. Deschanel directs the episode well, with a strong feel for what makes BONES the show that it is.

While the twist about the conjoined twins is good, the solution feels quite rushed, especially since this serial killer storyline has lasted about half a season. BONES is often adroit with character arcs – Booth’s gambling issues, Hodgins’ paralysis – but somehow it frequently falters when it comes to resolving long mystery stories.

Still, “The Hope in the Horror” gives every reason to hope that the rest of BONES Season 12 will be satisfying.