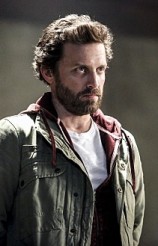 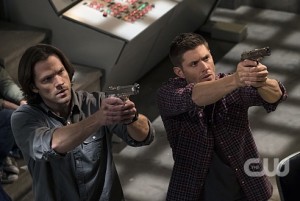 The SUPERNATURAL Season 11 finale, “Alpha and Omega,” goes for the emotion. Yeah, we’ve kinda-sorta been here before, but once in awhile, it’s okay to hug. Also, even though the audience knows if Season 12 is coming, there’s a good chance that the universe won’t end after all, the characters have to believe the end is nigh and behave accordingly.

It certainly looks bad when we rejoin our heroes at the start of the episode. God, aka Chuck (Rob Benedict), is in terrible shape after being bested by his sister the Darkness, aka Amara (Emily Swallow). Castiel (Misha Collins), however, is only a little worse for wear after Amara knocked or pulled Lucifer out of him. Rowena (Ruth Connell) offers to make “Charles” a cup of tea. Crowley (Mark A. Sheppard) can’t believe Chuck is accepting Rowena’s kindness at face value, since she’s only being nice now, but Chuck points out that now is all there is.

Dean (Jensen Ackles) decides if the world is ending, he’d just as soon drink. Even though Sam (Jared Padalecki) is incredulous at this stance, Dean goes on a beer run and takes Castiel with him. Castiel regrets letting Lucifer in, as it didn’t do any good, but Dean says that Lucifer was their best shot at taking down Amara, and Castiel was the only one willing to try it. Dean thanks Cass for everything he’s done and says that Cass is Sam and Dean’s brother.

Since if God is gone, all the light in the universe goes with him, Sam suggests that they kill Amara after all. If God/Chuck was still going to be around, they’d need the Darkness/Amara for balance, but if God/Chuck is gone, Amara needs to die so that darkness will not prevail in the absence of light. The empty scales will be balanced.

Sam calls Dean to come back (no more beer run and no more bonding dialogue). How can they kill Amara? It would take the power of a galaxy of suns, and Chuck is too weak to make that. Souls are extremely powerful, so a “soul bomb” may work. Heaven refuses to give any to Castiel – the angels are shutting the doors to die with dignity. Crowley’s demons have absconded with the souls of Hell. Sam and Dean go to a very haunted abandoned asylum and scoop up a bunch of ghosts there.

This attracts the attention of Billie the Reaper (Lisa Berry). When Sam and Dean get back to the Men of Letters headquarters, they realize they don’t have nearly enough souls for the soul bomb. Billie shows up and says that, as a Reaper, she has access to about a hundred thousand souls. Even though she is still royally angry at Sam and Dean, she is willing to help in this instance.

Now the question is how to get the bomb close enough to Amara. The bomb gets put inside Dean. Chuck feels terrible. He doesn’t want to kill his sister, he doesn’t want Dean to explode. Goodbyes are said at the grave of Sam and Dean’s mother, Mary Winchester. Castiel offers to go with Dean, but Dean says he has to do this alone. Castiel hugs Dean. Dean tells Cass to take care of Sam. Sam and Dean hug.

This is a lot of emotion and hugging, but again, so far as the characters know, Dean is really going to blow up and leave the rest of them behind. It fits and it’s neither too sappy nor too dry.

During all of this, several things are happening elsewhere. In London, Lady Toni Bevell (Elizabeth Blackmore), like everyone else, sees that the sun appears to be going out. We see that she has a lot of “wanted” posters of Sam and Dean. She takes her kit, including a gun, and heads for Kansas.

Chuck zaps Dean to the garden. Amara knows why he’s there, knows about the soul bomb and surprises Dean by saying that she’s not doing anything to the sun. It’s dying because God is dying. Whether or not Amara dies, Chuck’s death will end the universe.

Dean asks Amara what she wants. Amara zaps the dying Chuck to the garden. Amara has always loved her brother. She was jealous when he started to make other beings – why couldn’t it just be the two of them? But now she sees her brother’s creation is beautiful. She forgives him for locking her away for billions of years. Chuck also thinks it would be great if they could be family again.

And the sun goes back to normal.

Back at the Men of Letters headquarters, not knowing that Amara wasn’t responsible for the sun starting to go out, Sam, Castiel, Rowena and Crowley all assume that Dean succeeded and is consequently dead.

Chuck tells Dean that he and Amara are going off together for awhile to discuss family things. Chuck removes the bomb from Dean’s chest. Amara says that because Dean gave her what she needed most (her brother), she’s going to return the favor.

Sam is by himself at the Men of Letters headquarters when Toni lets herself in. She’s from the London branch of the Men of Letters, and she’s here to arrest Sam and Dean. When Sam says that Dean is dead, Toni pulls a gun and insists that Sam come with her. Sam refuses. We hear the gun go off.

Meanwhile, Dean, trying to figure out where the hell he is – Chuck and Amara didn’t zap him back to the Men of Letters HQ before vanishing – comes across a distraught woman in a white nightgown. Dean is astonished. “Mom?”

Well, Mary Winchester is someone we didn’t see coming. The boys have spent time with their mom way in the past (before they were born, thanks to time travel – if you missed the episodes, turns out she was the Hunter in the family before John was), but she died when Dean was young and Sam was a baby. So this is going to be a brave new world of family connection.

Since Season 12 is rolling on, whatever happened to Sam won’t be permanently fatal. He and Dean will be relieved to see each other, Sam may or may not sulk about Dean’s willingness to leave him alone, and Castiel will have some sort of reaction to Dean’s survival.

With “Chuck” on sabbatical, who knows what the angels will be up to, and with Lucifer at large, it’s anyone’s guess what the Hell will happen down below. It’s hard to imagine how they can up the stakes after the goings-on this year, but the SUPERNATURAL team has definitely demonstrated a creative wellspring. May it flow into Season 12.