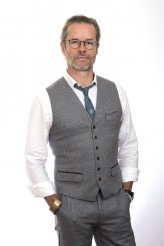 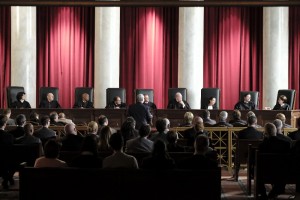 WHEN WE RISE is a four-part miniseries, written by Dustin Lance Black, about the gay, lesbian and transgender civil rights movement from 1971 through the present. The ABC presentation, which also examines feminism and racial civil rights, begins Monday, February 27, skips a night and then continues Wednesday-Friday, March 1-3.

Black earned an Oscar for his original screenplay for MILK, the 2008 feature film about the late San Francisco city supervisor and gay rights activist Harvey Milk. WHEN WE RISE similarly dramatizes the lives of real people. We see some of them in both their youth and as older adults. Cleve Jones is portrayed by both Austin P. McKenzie (younger) and Guy Pearce (older); Roma Guy is played by Emily Skeggs (younger) and Mary-Louise Parker (older); Ken Jones (no relation to Cleve) is embodied by Jonathan Majors (younger) and Michael Kenneth Williams (older). Ivory Aquino plays Cecilia Chung.

ASSIGNMENT X: Was WHEN WE RISE inspired by your research for MILK – did you wind up with so much more material than you could fit into the film that you wanted to do this miniseries afterwards?

DUSTIN LANCE BLACK: No. Four years ago, when I found out ABC wanted to make a show in this area, I asked them for a period of time to do research, and I took a year going out and looking for a handful of true stories of actual people who had fought in other civil rights movements, who had done so for an extended period of time, meaning from the early ‘70s until now. So I went and started my research in the women’s movement, the black civil rights movement, the peace movement starting in the late ‘60s, early ‘70s, and that’s where I arrived at the cast of real characters who you meet along the way in WHEN WE RISE. It is there there’s a connection, because Cleve Jones is one of those characters, and he is extraordinarily unique in that the lifespan of an activist [within a movement] is often three to six years. It’s exhausting, often unrewarding work, and he stayed in the movement for forty-five years. My mom called him the Forrest Gump of the gay movement. It was hard not to use him as someone who would pull us through. So there is that connection, but it was all new. It was all new research.

AX: How did you decide which people you would depict in WHEN WE RISE?

BLACK: It was a year-long search that took me all over the country, and a little bit all over the world. And Cleve was not necessarily going to be one of the people featured. In fact, I think the first cast member who I decided, “This is who I have to depict” was Roma Guy. She started it for me. And then I found out how close Roma was with Cleve, and I started to see the natural connections of the families they had to build, and so when I found out that Ken and Roma and Cleve had all worked together as young people since 1971, it solidified. Sadly, there aren’t a lot of people like Cleve. We’ve lost so many in a plague. And so there aren’t a lot of choices. There are a few others who have fought from 1971 ‘til today, David Mixner being one who’s mentioned in the later episodes, but not a lot.

[Something] that was important to me is that we make sure that some of, if not most of them, are still around. And so sadly that ruled out a lot of really inspirational people who you do meet along the way, but who don’t necessarily make it to the end. It might be crazy, but I do hope that young people, when they see this, go on Twitter, go on Facebook, go on Instagram, to look up Cleve Jones, Roma Guy, Ken Jones, Celia Chung, and go, “Oh, my goodness, they’re still fighting. I’m going to send them a message, and not only draw inspiration, but maybe get to work with them.” That ruled out [the late] Morris Kight and so many amazing people.

AX: Did you come to any conclusions about what distinguishes people like Cleve Jones and Roma Guy and Ken Jones and Cecilia Chung who stay with activism throughout their lives, as opposed to people who start strong but burn out?

BLACK: There is a selflessness to the folks who seem to be able to survive the ups and downs of being involved in the movement. There’s an understanding that I hope the show conveys, which is, you’re going to face not just backlash from the outside, but from within your own community, and that also has to be survived, and not to personalize that. I tell young activists who are just entering the movement, or asking, “What is it I can do?” I warn them immediately, “You’re going to get the most criticism from your own. You’re going to get the most heat from your own. And don’t give up. You have to push through that.” If in any way this can be a road map to young people trying to make the world a little bit better, I hope it gives them comfort when they get resistance from their own that this isn’t unusual. This is how it works. We’re all feeling our way through the dark towards a better world, and there’s going to be disagreement of how we get there.

These are incredibly unique, strong, special people. And it was important to me, in deciding who to depict, that many, if not most, are still alive, because I do hope that a new generation looks to those people for inspiration and we can find ourselves with more leaders like this, who are able to work in these movements for broader social justice their entire lives. We need those people now more than ever, and I think it’s about time for us to be able to tell our LGBT stories, to be taken seriously, to even be able to be political, and to show these people that do that can survive and thrive. Whenever you’re depicting a social justice movement, often we’re allowed to be, whether it’s racial injustice or LGBT equality, you’re allowed to be a supporting character, and funny at first, usually. Then you’re allowed to be dramatic, as long as you die at the end. I’ve made one of those films. And I thought this was the time when we finally needed to make sure we showed that you can live a life of purpose and survive and to thrive, and that is what these real people did, and I do hope that they inspire a new generation.

BLACK: Yes, you can live, absolutely. We have too many civil rights stories that end the other way, don’t we.

AX: Did you ever see the 1977 documentary WORD IS OUT: STORIES OF SOME OF OUR LIVES, which talked to a lot of lesbians and gay men? WHEN WE RISE has some echoes of that …

BLACK: I did see WORD IS OUT, and it will always be inspiring to me. It was an incredibly brave project. It discussed issues that needed to be discussed well before that was fashionable or even safe for some people to discuss them. And I think great artists, that’s what they do.

AX: Gus Van Sant, who directed MILK, is one of your fellow executive producers on WHEN WE RISE, and he also directed the first episode. How did he come to be involved in the project?

BLACK: First of all, I love Gus. Gus is one of my best friends, so he’s the first one I went to. He certainly helps when it comes to cast and bringing great talent to the show. People want to work with Gus. I’m not alone in that. So there’s a reason why we were able to attract such great designers and cinematographers and cast. He was very, very helpful in all of that. He’s also just the most collaborative, lovely guy to work with.

AX: You’ve said that WHEN WE RISE was attacked online months before it aired, just from the trailer …

BLACK: If you go online to the trailer, and you look at the comments, I noticed an incredible amounts of “dislikes.” I said, “What is that?” And I look at the comments. I’m not Trump, I’m not going to react to them, I don’t take them personally, but I’m curious. And they were not mostly anti-gay, they were mostly anti-Semitic and racist. And so I then take that and I track it back. Where did those come from? Where is this coming from? And you find this very vocal, very organized, strong group of people who are minority. They’re even a very small part of the people who supported Trump. I think it’s been overblown. But they’re organized, and they want to make this into something it’s not. They want to make this Us or Them. And that’s not what this is. By the end episode, one of the great heroes of the series is Ted Olson [played by Arliss Howard], who was the Solicitor General for George W. Bush, who argued for marriage equality. So this isn’t right or left, it isn’t red or blue. It’s misinformation.

Some of it’s really funny. One guy did a video online which breaks down the trailer and analyzes my relationship with my father. And as I’m watching it, I’m going, “This guy’s really funny. I mean, he’s saying the worst things about me, none of it’s true, but it’s really funny. I bet if he and I met in a bar, we’d really get along. We’d hit it off.” And that’s what WHEN WE RISE is trying to do. It’s saying, “I know you want to make this into a fight, but if we actually communicated and brought a little less fear to it, we’d get along.” So when I say I read the comments, I’m not angry. I just want to reach these people. I want to meet them. And if they still hate me, fine.

AX: What do you hope the effect of WHEN WE RISE will be?

BLACK: If anything, what I would love to do, and what I hope the show does, is show the American public where the bridges are. We shine a light on the bridges. They exist. There’s been a lot of misinformation that creates a lot of fear, a lot of walls, and what I’m hoping to do with this show is build some bridges to say, “Guys, you can be gay, lesbian, bisexual, transgender, in San Antonio.”