Home » Bones The Brain in the Bot review 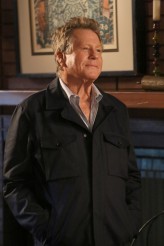 The A.I. is fun, but Brennan is on the illogical side 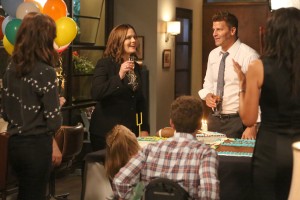 Our beloved Dr. Temperance Brennan (Emily Deschanel) as a psychological sadist? That probably isn’t the intent in the BONES Season 12 episode “The Brain in the Bot,” but that’s the takeaway.

You may wonder how that works. In the B plot, Brennan is planning her own surprise fortieth birthday party. Her idea is that she will enjoy surprising other people, whereas she wouldn’t like to be startled. This actually makes sense, but in order to surprise lab assistant Daisy Wicks (Carla Gallo), Brennan has to make Daisy believe that Brennan thinks she’s only adequate. Daisy finds that she is being considered for a job with the prestigious National Forensics Lab (NFL), and is in an agony of self-doubt. Brennan reveals at the party that not only has Daisy snagged the position, but Brennan recommended her for it in the first place. Fair enough, except that Daisy has spent a lot of time being miserable. The surprise effect doesn’t seem to be worth the pain (although the bakery decorating Daisy’s cake with a football because of the NFL is amusing).

Likewise, when Angela (Michaela Conlin) gets a MacArthur Fellowship genius grant for her invention the “Angelatron,” Brennan feigns jealousy. In fact, again, Brennan recommended her friend for the lucrative honor, another revelation at the birthday party. Good to know, but once more, Brennan has spent most of the episode making Angela deeply uncomfortable. Because all this comes out at the end of the episode, there’s no time for anyone to point out that while Brennan may be having fun, it’s at the expense of people she cares about. The other characters don’t seem to notice, but it’s the kind of thing most folks would comment on in real life.

In the A storyline, a body found in the woods turns out to be the remains of Dr. Ian Goldberg. Goldberg was a pioneer in artificial intelligence. His robots are helpful in working with autistic children. His prize creation would seem to be AMI, a very perceptive unit that looks a bit like BB-8, speaks in full sentences and can read human facial clues. Suspects include a variety of people at the lab, and perhaps even AMI.

However, the injuries to Goldberg’s body are puzzling. He seems to have been struck with a variety of objects from multiple angles. Daisy realizes that at some point, the body was hoisted up into a tree, though it came down again.

Booth (David Boreanaz) and Aubrey (John Boyd) learn that the day Goldberg died, AMI’s memory was wiped – by Goldberg himself. This leads the two FBI agents to a shabby warehouse. The place contains Goldberg’s secret – he had manufactured a large number of lifelike female robots to be used for sex.

The culprit turns out not to be a criminal genius, but rather a drug user who used to get high with Goldberg in the forest. This extremely stoned individual had suggested the sex-bot idea to Goldberg, and got angry when the scientist gave him a portable sound system as a gift, rather than cutting him in on the financial rewards.

In a C plot, Brennan’s father Max (Ryan O’Neal) is behaving with odd sentimentality. Brennan isn’t paying much attention to this – yet.

The murder mystery aspect is handled well, and the artificial intelligence angle is intriguing. For all Aubrey’s worries about Skynet, it’s easy to see how the patience and consistency of a robot might be reassuring to children who have trouble opening up to other humans. “The Brain in the Bot” inspires curiosity about real-world applications, which is one of the best things a TV episode can do.