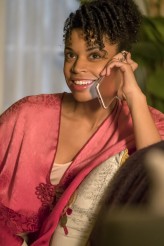 THIS IS US: Actress Susan Kelechi Watson on the hit NBC series – interview 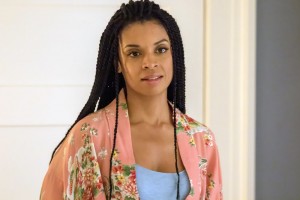 When the THIS IS US cast, plus creator Dan Fogelman, come out on stage for a Q&A session at the Winter 2017 Television Critics Association (TCA) press tour, everybody is a little emotional. This is understandable. Five minutes earlier, they had been informed by NBC Entertainment President Jennifer Salke that their freshman Tuesday night series had been renewed for not one but two more seasons.

THIS IS US deals with the Pearson family. On the thirty-sixth birthday of Jack Pearson (Milo Ventimiglia), his wife Rebecca (Mandy Moore) gives birth to triplets. One of the babies is stillborn, so Jack and Rebecca adopt a third infant who has been abandoned at the hospital. The story jumps back and forth in time, so that we Jack and Rebecca raising their three youngsters, and also see the grown children – Randall (Sterling K. Brown), Kate (Chrissy Metz) and Kevin (Justin Hartley) – when they are thirty-six.

Susan Kelechi Watson plays Beth Pearson, wife of Randall and mother of their two young daughters in the present-day timeline. Watson has had arcs on THIRD WATCH, NCIS, LOUIE, THE FOLLOWING and THE BLACKLIST. She has also known her TV husband, actor Brown, since they were both studying acting in grad school at NYU.

On the THIS IS US panel, Watson is asked about being part of a dynamic African-American couple, still a comparative rarity on American dramatic television.

Watson says, “I feel honored to play it. I don’t know that we knew that it was going to be that, right?” She turns to Brown.

“At least for me,” Watson continues, “I think we just set off to get in this space. I trust Sterling no end. And so when I jump into a space with him, there’s no question that he’s going to do something that I trust and I can follow, and we’re going to follow each other, and we’re just going to play back and forth. But I didn’t know that it was going to have the impact that it does. And so that has, for me, become an honor. It’s an honor to honor marriage in a way that it’s a marriage that is like, one person is not half out the door, and one person’s not cheating on the other or doesn’t really like them. These people choose to be in this space with one another, and they choose to make it work. And it can go can go anywhere. It can be bad. It can have a bad day, can have a good day, can have a bad week, and have a great week. But they’ve decided that this is what they want to do together, and they honor that. I think that’s really what it’s based in.”

When the panel ends, Watson stays to answer a few more questions.

ASSIGNMENT X: What kind of person do you think Beth is?

SUSAN KELECHI WATSON: [I] have friends who are like that for me, have a family that’s very much like that. It’s like, no matter what, I’ve committed to being here for you. I think that sort of [commitment] doesn’t have a limit to it. I think for me, if I’m being honest, I probably have a limit to it. If a friend crosses a line, there’s a limit. I think that Beth has become a woman to me who, once she makes that commitment, there’s no limit. She’s going to do her best to fulfill it. But in that process, she’s going to have a lot of falls, flaws, breaking points, but the commitment is still there.

AX: Did you and Sterling K. Brown go off and hang out together for awhile to get the rhythm of your relationship, or did you just find it on camera?

WATSON: We just found it on camera. I trust him. As he said, we come from the same training, and it’s so easy when somebody is playing out of the same playbook, out of the same rule book, so we just know how to do this with one another. It’s just coming from the gut, it’s coming from our innermost artist selves. So we just jump in together and we continue to create, and we try not to let the outside voices penetrate too much, we kind of just keep being true to these characters and who they are together.

AX: How is playing a mom? What is your relationship like with Faithe Herman and Eris Baker, who play your little girls?

WATSON: They’re so cool. Off-set, we’re more like buddies than I am a mom figure to them, I think. But on-set, and this is something different for me because I’m not a mother, but I am an aunt, and I feel like I’m a pretty good aunt [laughs].

AX: What kind of mother is Beth?

AX: And do you feel like Beth gets enough time with her in-laws in the scenes, or are you looking forward to more?

WATSON: Oh, I always look forward to more Mandy, more Mandy and Miguel [played by Jon Huertas]. Unfortunately, I don’t get to meet Milo at this stage in life. [Justin Hartley as] Kevin and I have a very brother/sisterly relationship. I feel like I can antagonize him and it’s fine [laughs]. He can be crazy with me and it’s fine, we’ll get over it, it’s fine. And Chrissy [as Kate] and I, we have fun and do karaoke together and just have a good time with each other whenever we’re together. So I have a certain dynamic with his family. It’s not the same for me as it is with Sterling, but she has found her place in the family as well.

WATSON: Yes. Actually, I am workshopping a one-woman show in New York once I leave here, so that’s the next thing that I’ll be working on. I don’t have a working title for it yet.

AX: Do you have a theatre for it yet?

WATSON: I’m workshopping it at NYU. So I’ll be doing it there first, and I should have it going up somewhere in May.

AX: And what would you most like people to know about THIS IS US?

WATSON: I would like them to know that, if they watch our show, somewhere in it they will find a reflection of themselves, and we feel really proud to share that with them.