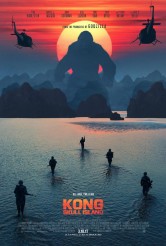 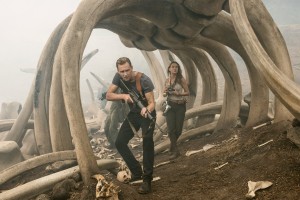 If King Kong and the Viet Nam War haven’t yet merged in your mind, they will now, for at least as long as you remember KONG: SKULL ISLAND. The new movie is mostly set in 1973. This may be because this is the era closest to our own when there could legitimately be large portions of the globe that couldn’t accurately be explored with satellites. However, from the evidence onscreen, it seems more likely that the filmmakers wanted to riff on APOCALYPSE NOW as much as they wanted to do a Ray Harryhausen-esque movie involvind a heroic giant ape and his hidden world.

It should be noted upfront that KONG: SKULL ISLAND harks back to movies of yore in its overall content – a bunch of explorers with diverse motives go into uncharted territory and discover that they are woefully unprepared for what they find there. In its social mores and ecological ethics, however, KONG: SKULL ISLAND is up to date. It is multi-racial, women are represented as active, thinking characters and the filmmakers are solidly on the side of their title big star.

KONG wastes no time in introducing us to the super-sized gorilla. During World War II, two soldiers, one American and one Japanese, both survive plane crashes to face off on a mysterious island. Their duel to the death is interrupted by the big guy.

Randa also rates a military escort, headed up by Preston Packard (Samuel L. Jackson), who is only too happy not to have to return to civilization. Most of his men have been looking forward to heading home, but a few share their leader’s gung-ho sentiments. There’s also a team of scientists. Some ulterior motives, none very surprising, surface as the situation becomes desperate. In addition to Kong, the island hosts a whole bunch of very large creatures, a few benign, but most of them deadly.

Director Jordan Vogt-Roberts and his writers, Dan Gilroy and Max Borenstein and Derek Connolly, working from a story by John Gatins, clearly enjoy the possibilities of all manner of weird, enormous creatures duking it out with each other and occasionally munching on the intruders. To the credit of KONG: SKULL ISLAND, the moviemakers don’t try to modify this pleasure for hipsters. Either you like this kind of thing or you don’t, and here we get the kind of spectacle that is pure chewing satisfaction for fans.

Still, we also get lots of shots of ‘70s U.S. troops trekking through shoulder-high foliage, bombing the greenery and motoring down rivers while Creedence Clearwater Revival blasts on the soundtrack. It’s done skillfully and the metaphors, while clear, aren’t hammered too hard. Still, there’s enough of this for us to feel that some of it is there because the filmmakers derived joy from making it, rather than because it adds to our appreciation of the characters or story.

One could quibble with the fact that some life on Skull Island is normal-sized, while other organisms are gigantic, but since nobody spouts any exposition about this, it doesn’t matter. John C. Reilly gets the bulk of explanatory dialogue, but he’s so delightful (and seems so delighted with the project) that once he shows up, he all but steals the film.

Of course, it’s hard to completely steal anything from Kong, who is played here by motion-capture geniuses and ape movement experts Toby Kebbell and Terry Notary. (Kebbell also does a good job as a soldier who spends the bulk of his time trying to compose a letter to his son.) Kong is depicted as being kind of like a non-verbal, extra-large Batman. He’s surly, violent and has a tragic past, but he can be counted on to protect the neighborhood. He has emotion, personality and authority, rather than just being a suit or special effect.

Wisely, the characters don’t try to take Kong to New York or elsewhere. There’s also not much in the way of real romance; there’s a bit of friendly interest between two pairs of male/female characters, but nothing more, which makes sense in the circumstances. This time, Kong doesn’t fall for the leading lady. Speaking of Larson’s character, she has more agency than females have had thus far in Kong stories.

Given his top-billed status, Hiddleston is underused, though he and Larson are effective and charismatic as the voices of reason throughout. Jackson and Goodman both bring their differing but equally intense determination to their characters. It’s fun to see Hawkins, currently the action star of 24: LEGACY, as a mild-mannered scientific type coping with the perils of the jungle. Shea Whigham is affecting as a war veteran who never says it, but feels he can’t go home, and Marc Evan Jackson adds humor as a scientist who clearly didn’t sign on for this kind of gig.

KONG: SKULL ISLAND is big, fast, mostly solid and appealing in its nostalgia for the big monster movies of yore. It’s a very good one of what it is.