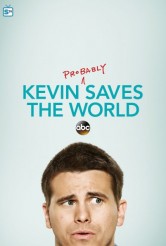 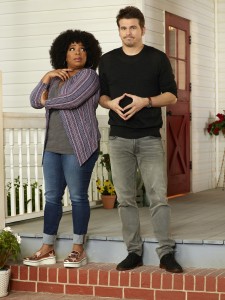 In ABC’s Tuesday night fantasy dramedy KEVIN (PROBABLY) SAVES THE WORLD, Jason Ritter plays Kevin Finn. Kevin is a one-time Wall Street whiz who has returned to small-town Texas to stay with his widowed sister Amy (JoAnna Garcia Swisher) and her teen daughter Reese (Chloe East) after suffering a breakdown. Kevin’s life is changed when a meteor crashes into a nearby field, accompanied by “Warrior of God” Yvette (Kimberly Hebert Gregory). Yvette informs the astonished Kevin that he is one of the thirty-six righteous people on Earth – it is his task to find the other thirty-five. Yvette, who protects Kevin, is invisible to other people, but her actions are not, so Kevin’s niece Reese is keen to find out how it is that speeding trucks somehow levitate over her uncle to avoid hitting him.

KEVIN (PROBABLY) SAVES THE WORLD creators Tara Butters and Michele Fazekas have some experience in stories about heroes with celestial and infernal cohorts. They also created REAPER, about a young man who discovered his parents had sold his soul to the Devil. Butters and Fazekas originally met each other working on THE X-FILES. They subsequently teamed up as writers/producers on LAW & ORDER: SVU, DOLLHOUSE, HAWAII FIVE-0, RESURRECTION and AGENT CARTER.

Butters takes time to explain a little more of KEVIN’s premise and how Yvette guides the sometimes reluctant hero toward fulfilling his destiny.

ASSIGNMENT X: How would you describe the premise of KEVIN (PROBABLY) SAVES THE WORLD?

TARA BUTTERS: It’s one of those things where it’s easier to watch it than to explain it. I would say it’s about a guy who is an Everyman, who finds out that he has been tasked to save the world, and he’s tasked to do it through acts of kindness. And as earnest as that sounds, this is not an earnest show. It has humor and irreverence, but at the same time, it does have heart. And so I’m hopeful that people give us a shot, because I do think it’s meant to be fun and enjoyable, and a break from the world at large.

I think that [viewers] will, hopefully, get a break from everything that’s going on in the world and enjoy themselves. And see that you can still have a heart, and it can be fun. That’s the thing. At the end of the day, Michele and I wrote on SVU for five years, we wrote nineteen episodes. It was a wonderful show, and Mariska [Hargitay] and everybody over there is incredible. And that show is one aspect of television, where it could be dark, and I think it’s great to shine a light on that, but I also think we can shine a light on the positive part of humanity, too. And I don’t think TV should shy away from showing that there can be a positive side to humanity. 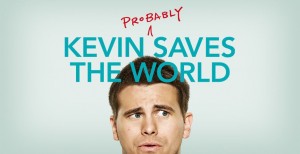 AX: How did you and Michele Fazekas come up with the idea for KEVIN (PROBABLY) SAVES THE WORLD?

BUTTERS: Michele and I had another pilot at ABC, and for various reasons, it did not move forward, and so we were in this weird place at the end of November [2016]. We wanted to write something, and we decided to write something that was resonating with us. I will say whether you’re politically on the left or the right, the fact of what I felt at the end of November was an overall sense of hopelessness that the country was feeling, whether you won or you lost. It didn’t matter what side – the general sense of where we were at as a country was one where it felt like people needed hope. And that’s what stemmed from us. It was just wanting to tell that type of a story, where there is good in the world, and there are people out there who want to show humanity – instead of being so tied into, as Michele said, negative Twitter, and big news stories, and all that, show humanity. People want to help people, and I think that’s another part of our world that’s not really getting much people talking about it.

AX: Had you been looking to work with Jason Ritter?

BUTTERS: Here’s the funny thing – we actually worked with his father [the late actor John Ritter]. We did an episode of SVU, and we had a delightful time with [John Ritter], and when [Jason Ritter] was pitched for KEVIN, we had him come in and do a test read, and we knew immediately that he was our guy. It was on his birthday, too, so he had come in and we had brought him cupcakes, and we did a one-person test with just Jason, and he was so – the first time we actually felt the character, and so we literally took the rest of the cupcakes, walked ourselves right up to the studio president, Patrick Moran, and we’re like, “We found him!” [laughs] We were so excited.

AX: We learn in the pilot that the meteors like the one that came with Yvette have landed all over the world. Does this mean the story, if not literally production, but will the story go all over the world with the various meteors?

BUTTERS: We’ll mostly stay in our town, dealing with Kevin and how Kevin reacts, but the fact is, those meteors were like Yvette. We’ll eventually meet others like her.

AX: Did Yvette and those like her come out of the meteors, or are they the meteors themselves?

BUTTERS: Kind of both [laughs]. It’s one of those things where that’s how they came here …

AX: So the meteors are sort of like their ships?

AX: Are all of the meteor people as benevolent as Yvette?

BUTTERS: You’ll have to watch and find out.

AX: Are you going to have something like thirty-six sinkholes that disgorge entities who urge Kevin and those like him to be bad?

BUTTERS: At this point, we’re just focusing on the thirty-six meteors that came. I think really it’s a show about Kevin and Yvette, and we will hopefully meet some interesting people along the way.

AX: Who does J. August Richards play in the show?

BUTTERS: He plays Nate. He’s the sheriff in the town. He went to school with Amy and Kevin, and what we’ll find is that he has harbored a long crush on Amy, and so we’ll explore their upcoming relationship over the course of the season.

AX: You’ve said that the title was originally THE GOSPEL OF KEVIN, but that KEVIN (PROBABLY) SAVES THE WORLD fit the show better. There is another show on TV that also begins with the word “Kevin,” that is, KEVIN CAN WAIT. Was there any concern about audience confusion?

BUTTERS: I actually think if we’d stayed with THE GOSPEL OF KEVIN, and then KEVIN CAN WAIT [exists], that’s far more – they’re both in a HEAVEN CAN WAIT kind of whole thing. Other than when we realized we were looking for a new title, we looked at hundreds, and this was the one that made everybody kind of chuckle, and kind of go, “Tonally, this is the show. It’s a guy trying to do his best.”

AX: Is there anything else you would like people to know about KEVIN (PROBABLY) SAVES THE WORLD right now?

BUTTERS: How amazing our cast is. JoAnna we didn’t read, we just made a straight offer to her. So we didn’t have that opportunity to see her until we got to the table read. But the funny thing is, I think she knew she was going to be this character before we did. I mean, she embodies Amy, and the collaboration between Amy and Jason and Kimberly and Chloe – they really like each other, and I think it really shows in the dailies and the future episodes. They have fun. And again, the show is about fun and light, and hopefully, people will need that at ten o’clock on Tuesday nights.

This interview was conducted during ABC’s portion of the Summer 2017 Television Critics Association press tour.