The exec producer talks about fitting the concept to today's audience 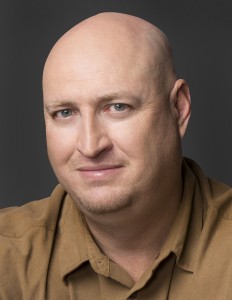 Although it shares the same name as its 1975 predecessor (and the 2003 feature film), CBS’ Thursday night drama SWAT is largely a new endeavor. While the Special Weapons and Tactics squad is still named Daniel “Hondo” Harrelson and we still hear Barry De Vorzon’s indelible theme music, this SWAT is a much more grounded take on the heavily armed crisis division of the police department.

Set in and around South Central Los Angeles, the new SWAT deals extensively not only with police response to violent crime, but also the strained relationship between the department and the often mistrustful community it serves. This Hondo, played by Shemar Moore, is a newly-promoted lieutenant who is from South Central and trying to bridge the gap between the people he works with and the streets that he knows.

Shawn Ryan (THE SHIELD, THE UNIT, TERRIERS, THE CHICAGO CODE, THE GET DOWN, TIMELESS) is an executive producer and helped develop the updated SWAT with its creator, Aaron Rahsaan Thomas.

ASSIGNMENT X: When did you come into the SWAT project?

SHAWN RYAN: I came in pre-pitching it to CBS. I had worked with [fellow executive producer] Neal Moritz before, I had developed something with [executive producer/pilot director] Justin [Lin] before, I had worked with Aaron [Rahsaan Thomas] for almost a year on THE GET DOWN before I exited that show, and I’d heard from Sony that they were getting ready to do a pitch, and that Aaron was wondering if I’d be interested in joining on and assisting him. I came in, I heard what his pitch was, I really loved it, I had a couple thoughts I shared with him, and then about two, three weeks later, we all went out together and pitched it to CBS. So I would say that was July, maybe, of last year. So I was on the pitch, working on outlines and the scripts, making the pilot. So we all went in together as a team and sold it to CBS.

AX: Was Hondo Harrelson in this version always conceived of as a black lead?

RYAN: Yes. That was Aaron’s vision for the show. That, to me, was the reason to do the show. To do just another cop show with a guy leading a SWAT team wasn’t enough for me. To do a show about a guy who was born and raised and still lived in South L.A., who thought that there was a different way of policing the various communities in the city, and not having such an adversarial approach to the community, was everything to me. That’s the only reason I wanted to do this show.

AX: You’ve done a number of other network cop shows. Did you learn anything from those that has been helpful in making SWAT? 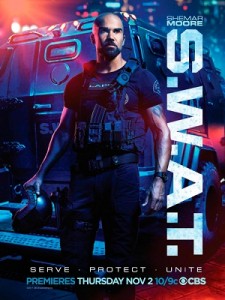 The other thing I’ll say is that what really interested me about telling this story was telling it on CBS. It’s in fashion to want to make something on one of the streaming companies, or one of the high-end cable companies. But a lot of the time, I think, those shows are speaking to a very small, specific audience on the coasts that probably agree with a lot of what you’re trying to say. To me, telling this story on CBS, and telling a story that we think is balanced – it is pro-police, but it’s also pro-community – trying to tell the truth about that to a CBS audience is more impactful than telling it at another network. So I’m really excited about it, and I grew up in Rockford, Illinois. My cousins always watched CBS [laughs], and what we found in the testing of the show is that that audience really loved the pilot, they really loved Shemar. They like the nuance of some of the racial elements to the show, how they’re dealt with. It made me really encouraged that the audience was open to the kind of story that we’re trying to tell, and that maybe this country isn’t quite so divided or polarized as we thought. Because this show sort of tracks both sides of that street, I think.

AX: At this point, do you even think, “I’m doing a cop show,” or is a cop show just a show, storytelling?

RYAN: The last thing we figure out about an episode is what the case or the criminals of the week are. We really try to start with the idea of, what are the emotional stories that we want to tell, what are the community stories we want to tell? Once we have that, we decide what’s the best crime story that we want to tell. So I view cop shows as a vehicle to tell sociological shows, and to tell character shows. And the police stuff is a way to really keep the audience interested. I love my action run-and-gun stuff, but it’s very life-and-death. And when you have life-and-death stories, you’re able to dig really deep into the emotions of your characters and the emotions of your guest stars. So cop shows are a vehicle – for me, anyway – to tell other kinds of stories. I would never be interested in telling a straight procedural crime story that didn’t dive into character.

AX: It’s been fifteen years since the big SHIELD and FX Networks win at the Emmys, which changed so many things for cable. Can you share some memories of what that meant for you?

RYAN: Well, I was terrified. I was nominated for writing, and I was overwhelmed with relief when I didn’t win [laughs], because I was just terrified of getting up on that stage. It turned out perfect, because really, I was very happy not to win and not to go up there. But to have Michael [Chiklis] win [for Outstanding Lead Actor], and to have the show be recognized in nominations for writing, acting, and directing, at a time when certainly basic cable television wasn’t considered to be of that quality, was extremely gratifying. I remember being there with my wife and my mother and just being so excited when Michael won. We made that whole first season really in a vacuum, not knowing if anyone would ever watch it, not knowing if anyone would take anything on FX seriously. And to get that kind of validation was a career-making memory, and I’m always grateful.

I’ve had the misfortune of working in basic cable when the Emmys really didn’t recognize basic cable, and now I’m back at network when they only seem to recognize streaming and cable [laughs]. So my Emmy days may be behind me, but I’m still determined to [do good work].

That’s why I’m always excited to come to this event [the Television Critics Association, aka TCA, press tour], because I remember, the first time I had any inkling that anyone would care about this show was the January TCA, it would have been January of 2002, when I went and some of the critics started seeing the pilot episode in their hotel rooms during that event, and a couple early reviews started leaking out that were very kind to us, and the critics were instrumental in putting that show [THE SHIELD] on people’s radar. It never would have been otherwise, and so I’ve always appreciated the opportunity to come and meet with critics. 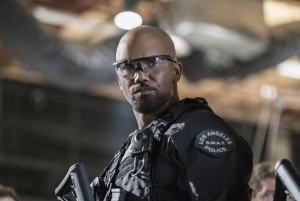 AX: What would you most like people to know about SWAT?