In the new YouTube Red comedy series RYAN HANSEN SOLVES CRIMES ON TELEVISION, actor Ryan Hansen plays an oblivious version of himself. This Ryan Hansen is being followed around by a reality TV crew as he helps, and annoys, LAPD Detective Jessica Mathers (Samira Wiley) catch criminals.

RYAN HANSEN SOLVES CRIMES ON TELEVISION was created by Rawson Marshall Thurber, a writer/director whose feature credits include the cult comedy DODGEBALL, WE’RE THE MILLERS, CENTRAL INTELLIGENCE and the upcoming actioner SKYSCRAPER.

RAWSON MARSHALL THURBER: It sure did. I finished CENTRAL [INTELLIGENGE], wrote this and then managed to get this green-lit right before I went to go prep SKYSCRAPER. So it just fit in the gap. And we’re hoping Season 2 – if we’re lucky enough to have a Season 2 – will happen after SKYSCRAPER is in post.

AX: As far as Detective Mathers is concerned, Ryan Hansen might as well be a loud octopus that has dropped out of the sky to tangle up her legs while she is trying to get her work done. Have you had anything in your own work life like this, where it’s something completely unexpected that you are trying to work around?

THURBER: No, I have not. I wish I had a better answer for you. I don’t, but I will say we got so lucky with Samira and Ryan. Together, their chemistry is unbelievable, but they’re both the sweetest, most decent, humble people. And it could have gone the other way. Because I didn’t really know Samira before the show, and I met her, and heard she was great, and I’d seen her work, and these two are just peas in a pod.

AX: Was your experience making CENTRAL INTELLIGENCE helpful for doing the action comedy of RYAN HANSEN SOLVES CRIMES ON TELEVISION?

THURBER: I’ve always wanted to make an action movie since I was eight. CENTRAL INTELLIGENCE, I’m very proud of it, so I would never call it a stepping stone, but certainly a bridge, and it helped me learn a little more about action. And then doing RYAN HANSEN helped me even more, and now I’m doing a straight action picture, so hopefully – we’ll find out if I’m ready. We’ll find out next July if I’m ready [laughs].

THURBER: No, I wrote it just as a love letter to Ryan Hansen, because he makes me laugh more than anybody out there. And so I wrote it – we had no idea where we were going to go with it, and then when [YouTube Red Global Head of Original Content] Susanne [Daniels] read it and wanted to make it, it made it even better. Because we already had the jokes of, he was on a show that was sort of like a North Korean Internet station, or something like that. It was already [conceived of to be] online, and then when YouTube Red wanted to do it, that was perfect, and then when I heard “YouTube Red,” I’m like, “They know what that sounds like, right?” And then we just kind of made a bunch of jokes about it, and then Susanne was cool and dug it. And that’s what I think makes Suzanne and YouTube Red cool. If they told us to take that stuff out, then we’re at the wrong place. There’s nothing like having a sense of humor about yourself that endears you to people, and I think YouTube Red has that. 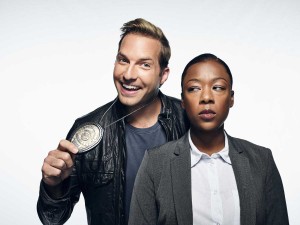 AX: You have a variety of video formats in the show. There is some material that looks like it’s shot on a cell phone. What is that actually shot on?

THURBER: It’s actually shot on a cell phone. All those opening pieces are shot on a cell phone. It’s an iPhone 7 – we shoot 4K, of course. We record sound differently, but yeah, it’s all shot on an iPhone. The show is shot on the Arri Alexa system. And then we change our format and our aspect ratio for segments. We have three [aspect ratios]. We have the 16×9 or 1:7:8, which is your standard television, and then we have 2:4:0 for the action pieces, and we have 4×3 at the end for the sitcom stuff, so that’s the square stuff.

AX: And what would you most like people to know about RYAN HANSEN SOLVES CRIMES ON TELEVISION?

THURBER: Well, I think it’s my favorite television show that I’ve ever made, and I hope they like it.