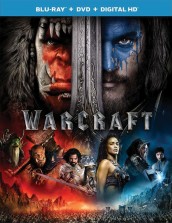 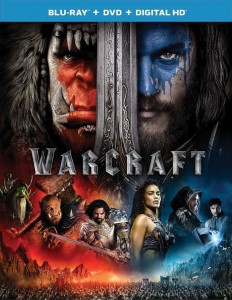 WARCRAFT – When a movie gets so universally panned by critics and fans alike, you go into it with very low expectations. That probably helped in my viewing of WARCRAFT because shockingly I actually found it not half bad. Yeah, the plot is basic and rambling with dialog and nonsensical elements along with literally nothing being explained other than bad orcs, good humans. But the special effects, which looked atrocious in the trailers, holds up alright and the action sequences are pretty good and at times brutal. But something had to make this become the highest grossing video game movie of all time (the film is based on the popular WORLD OF WARCRAFT game), of course much of this came from the Chinese market. And I understand that they tried to make a movie that appealed to both gamers and the general public and there are some interesting ideas here as there are in the video games. Unfortunately, it becomes almost too much for one movie, especially a movie as basic as this. Not sure if they will make a sequel (rumors they will make one just for the Chinese market), but if so they should really be more focused, maybe even focus on a quest-like mission rather than one enormous battle. 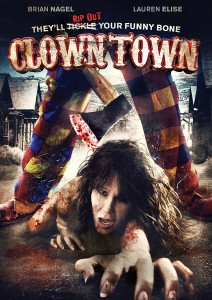 CLOWNTOWN – There’s a new genre of horror that has come to light in 2016. The universal consensus that clowns are spooky as all hell. Why else would people be scarring people in real life by dressing up as gnarly clowns and trying to scare and terrorize people across the U.S.? Horror makers have also taken up the call. Recently, we had the brutal CLOWN about a possessed clown outfit that turns whoever wears it into a child killer. Now CLOWNTOWN is out this week on video-on-demand that nails home the point that everyone hates clowns. When a pair of couples on their way to a concert travel to a lifeless town, they are soon confronted by a handful of makeup wearing psychos that obviously have no fun in their heart. Because they just want to maim and kill them. Unlike CLOWN, which really was extremely brutal on a number of fronts including the killing of kids, CLOWNTOWN quickly turns into a standard hunt for stupid people doing stupid things. Still, it doesn’t change the fact that clowns are creepy and deserve to be wiped off the face of the planet. CLOWNTOWN is available now on VOD. 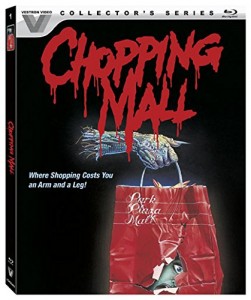 CHOPPING MALL – There are four, count ‘em four, classic horror flicks making their debut on Blu-ray this week. First up, is the maximum 80s robot slasher CHOPPING MALL. First off, I like the title. It’s a pun but you also know exactly what to expect. Kinda like a SHARKNADO. The plot is extremely basic. 1) Fancy mall puts new robot security in place. 2) Freak storm turns robots evil. 3) Robots kill everybody. Of course a group of twentysomethings go in the mall and get fed to these murderous robots – which happen to be bulky, block-shaped and on rollers … essentially what the 80s thought robots should look like. Still, with some good nudity, some decent kills and necessary 80s starlets of the time (Barbara Crampton and Kelli Maroney star), it is worth checking out and maybe the best it has ever looked now in high definition. The cool part here is that they included some cool new audio commentaries from some of the stars and horror historians as well as a retrospective featurette and other new stuff that makes it very interesting for those that like behind-the-scenes stuff. 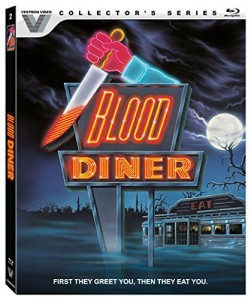 BLOOD DINER – The second of our horror classics out this week on Blu-ray is BLOOD DINER. Whereas CHOPPING MALL, despite its title, takes itself fairly seriously, BLOOD DINER is full of puns and weird sh** going on at all times. The story centers on two brothers that have the hottest diner in the city serving health food to the masses. Unfortunately, the meatless food isn’t quite meatless as it contains the body parts of the murdered victims the brothers dismember and then feed to patrons. Of course, they are all being told what to do via their uncle’s brain and penis that they dug up out of a grave and keep in a mason jar. All the while there are just weird stuff happening including vomit wrestling, FRANKENHOOKER-type resurrection, out of place ventriloquist act, naked karate babe, random pro wrestling match against a Nazi, virgin sacrifice, zombie drug party, supernatural deity and, naturally, black magic. Needless to say there is a lot going on here almost as if they wanted to put the whole kitchen sink into one horror comedy. While the horror isn’t scary, it is wildly entertaining and extremely 80s. 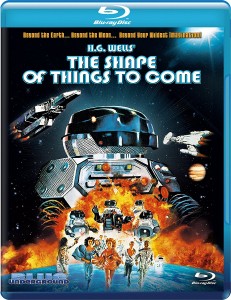 THE SHAPE OF THINGS TO COME – Third up is the science fiction thriller THE SHAPE OF THINGS TO COME, which apparently was adapted from an H.G. Wells novel. While this came out in 1979, it is close enough to be considered a 80s classic complete with numerous shots of CRT monitors displaying vast amounts of nonsensical information considered to be ultra-cool at the time. The plot is familiar in the Earth has become uninhabitable and everyone has moved to the moon (because that is a better habitat apparently). But a madman attacks the moon colonies with his army of incredibly bulky, slow moving robots that only really show up to get blasted for being slow and bulky. I really love the stuff from Blue Underground …usually. But this is just bad. It is bad science fiction cliché after bad science fiction cliché with none of the cool stuff about space. On one hand it seems to be trying a less serious 2001 but not go as far as say Roger Corman’s BATTLE BEYOND THE STARS. Trouble is, it ends up being milquetoast and droning on and on without much going on at all. Still, it looks great on Blu-ray and if you enjoyed it before it makes it look that much better in high definition. 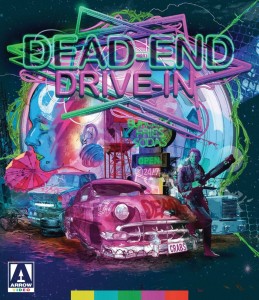 DEAD-END DRIVE IN – Last up is the Aussie wasteland-ish apocalyptic future 80s flick DEAD-END DRIVE IN, where you come to watch a movie and end up being stuck there forever. Apparently, this Drive in is the middle of nowhere otherwise people would just leave and there happens to be an electric fence that helps too. Maybe they should have checked Yelp reviews first. This one is from Arrow Video who has been cranking out the good stuff of European sleaze, lost American horror and random action and adventure title from Asia and elsewhere. This one is a cross between like THE WARRIORS with MAD MAX or maybe pre-MAD MAX as things haven’t quite gone to sh** just yet but is well on its way. The plot hinges on a couple going to the drive in and someone not surprisingly stealing their tires … and their stuck. Forever apparently because no one cares nor is anyone ever coming. So a society is set up with racial bigotry and class structure. But the dude that gets in there won’t just lay down quietly and tries the rest of the film to escape. Not a bad 80s flick with some decent amount of nudity but not a lot of kills or anything but still worth checking out.