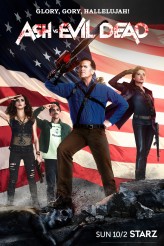 The actors talk joining the franchise 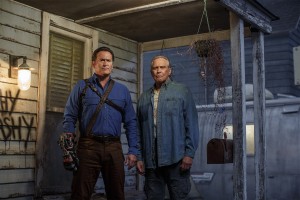 In Season 2 of Starz’s ASH VS. EVIL DEAD, starting Sunday October 2, the antihero played by Bruce Campbell has more company in his fight. In the TV sequel that picks up thirty years after the Eighties film trilogy, Ash has loyal pals Pablo (Ray Santiago) and Kelly (Dana DeLorenzo) to help him, and demonic frenemy Ruby (Lucy Lawless) to keep things ambiguous. The group is now joined by Michelle Hurd’s Linda B. Emery, who used to be Ash’s girlfriend, and Lee Majors as Ash’s dad Brock Williams, who still thinks that Ash murdered his own sister, Brock’s daughter. This belief is shared by a lot of people in Ash’s home town of Elk Ridge, Michigan, and they haven’t been kind to the Williams family because of it.

Although Majors has been a regular on a multitude of TV series, some very successful like the 112-episode THE FALL GUY, he’s still probably most identified with his role as bionic-enhanced Col. Steve Austin in THE SIX MILLION DOLLAR MAN. Like Campbell and the original EVIL DEAD creative team of Sam Raimi and Robert Tapert, both executive producers on ASH, Majors is also a Michigan native.

New Yorker Hurd has also done a lot of television, including a series regular stint on LW & ORDER: SVU. She is in the new seasons of both BLINDSPOT and DAREDEVIL.

Hurd and Majors sit down together about their mutual new experiences fighting Deadites on the ASH VS. EVIL DEAD sets in New Zealand.

ASSIGNMENT X: How aware were you of ASH VS. EVIL DEAD before you were approached about being in it?

MICHELLE HURD: Back in the day, I was at a movie theatre, and I was watching some movie which I didn’t like, and I left the theatre. Remember when we used to sneak into other theatres, double-feature it? And I walked into what was EVIL DEAD. It had already begun, so I didn’t know what was going on, but it was so amazing and so interesting that it made an imprint. So then cut to whatever years later, and I got this audition. So I was very aware of the movies. I had not seen the series, but as soon as I got the audition, I just pounded through the whole [first season] and loved it. So that was my initiation to it. I knew the movie, hadn’t know the series, and then I watched it.

LEE MAJORS: I had never seen the movies, but I had heard of them. But in my career, of the seven series I’ve done, they’ve all been more or less family-oriented action shows. And so for me to be connected with a horror series seems a little strange. But I watched the first episode of the first season, and then I binged the rest. So I said, “This is really a fun show.” It’s a way to put horror and humor together in such a way that when Bruce, Ash, is chainsawing someone, and throwing out these very funny lines, it just takes the curse off of what he’s doing, and it’s that way all through the show. So it’s not so bad. 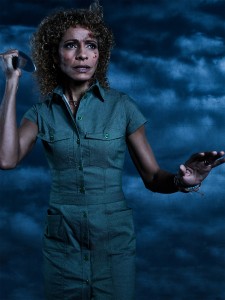 AX: Were you looking to get back to super-intense action? ASH VS. EVIL DEAD seems to require a lot of physical stamina, even for people who are just standing there, because of the splat factor.

MAJORS: No, I wasn’t really looking to get back into intense action. I’ve been playing a lot of fathers – in fact, I played Michelle’s [real-life] husband Garret Dillahunt’s dad on RAISING HOPE – and so that’s two good actors in one family there. But when I was asked to play Ash’s father, I thought I could bring to him some emotion. Ash learned everything from me [as Brock]. He’s a woman-chaser, he’s very raunchy, and loves the action. So he can be hard to put up with. When Ash comes to town, he took away my daughter, so I really have a big resentment for him, and I don’t like him, and I want him out of town as quick as possible. So it goes from there and we become a little competitive throughout, and then I bring out a little more emotion and some of his feelings in a way that you haven’t seen Ash before.

HURD: I just did DAREDEVIL Season 2. In all the different shows that I’ve done, and I’ve done quite a few, I’ve never done a horror/comedy thing. I’ve never done anything that has Deadites or zombies or so much prosthetics and all that kind of stuff. And that’s really what drew me. And I have to be completely honest – to go and to do a job, to be paid to work with Bruce Campbell, is like a gift. It really is. It’s like a master class. He’s so funny, his comic timing is really spot-on – it’s a very unique kind of humor and way of delivering things, so to be able to have an opportunity to work with that, with him, was really a learning experience. At this point in my career, I like to do things that I feel like I’m going to learn and benefit from. So that was really my reason. I wanted to work with Bruce, I wanted to do sort of a horror/comedy genre thing, which I’d never done, and get out of my cop/ captain/detective/law enforcement world for a moment.

AX: What does Linda do?

HURD: Linda B. is a waitress at the Elk Ridge saloon or bar, and a wife and a mom.

AX: And what does Brock Williams do, now that Ash messed up the family’s reputation?

MAJORS: Well, he lost his business, because nobody wanted to do business with the father of “Ashy Slashy.” So he’s kind of retired, more or less. He’s moping around the house.

AX: So Brock thinks that Ash killed all of those people who were actually possessed by Deadites?

MAJORS: Yeah, definitely. He holds a grudge and thinks he’s an evildoer. He doesn’t believe Ash is chasing evil people or devils or Deadites. He doesn’t know what they are. He soon discovers.

AX: Does Ash get his tendency to leap before he looks from his father?

MAJORS: Probably so. He gets a lot of tendencies from his father, as I told you. Like father, like son.

AX: After forty years of people making SIX MILLION DOLLAR MAN references to you, did it faze you at all that Ash has a mechanical arm, or do you just feel, “I’ve heard all the jokes by now, I’m not looking for parallels”.

MAJORS: There’s a little [Easter egg reference] that’s kind of cute in that particular area. I can’t reveal some of the stuff, but there are some funny lines.

AX: What do you think of the rise of TV fandom now that we have the Internet? Would you have enjoyed that in the heyday of SIX MILLION DOLLAR MAN, or would you have just felt, “This is way too much scrutiny”?

MAJORS: I did all my stuff before that. I wouldn’t want to be exposed like they are today [laughs].

HURD: Yeah. It is really, isn’t it? I mean, you can’t do anything in private, and everything is scrutinized. I feel like it takes away. It’s like seeing behind the curtain in OZ. There’s no more Oz anymore.

MAJORS: The only ones we had to watch out for back then were paparazzi. If you came out of somewhere, they’re there. They’re still there, too, today, but there are people inside now with their little cameras. So it’s very hard, especially for young kids [who are actors], to have a good time. If they get a little inebriated or something, it’s really hard these days. I’m glad I’m old school.

AX: There is fannish scrutiny of ASH VS. THE EVIL DEAD, but on the other hand, you are in New Zealand, where I think people are perhaps a little more polite than some in Los Angeles …

MAJORS: I didn’t see any camera, period. It’s very quiet, it’s a nice place to shoot. If [fans] want to travel fourteen hours down there, more power to them [laughs]. 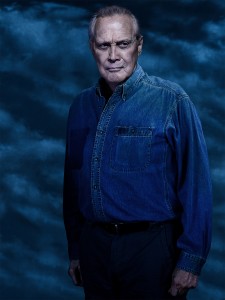 AX: Had either of you worked in New Zealand before?

MAJORS: Twenty-eight years ago, I did a Toyota commercial for New Zealand.

AX: Has it changed much?

MAJORS: Auckland has a little more tall buildings, but other than that, there are still more sheep than there are people [laughs].

HURD: This was my first time down in New Zealand, and they were great, really incredibly polite. It’s a family-oriented country, and it was really nice. We joked how the crew would be like, “Would you mind stepping on your mark?”, as opposed to, “Hit your mark.” It’s nice. It’s a great place to shoot.

HURD: I was sort of ready for anything. Because you don’t know, when you go onto different shows, how it will be. But these guys were so welcoming. And it all always starts with Number One on the call sheet. And Bruce is so generous. He set the tone, he made sure that we were really welcomed, really comfortable as soon as we got there. And Dana and Ray and Lucy are just a joy to work with, and Ted Raimi, who I love. So it was great.

MAJORS: I think Bruce is probably one of the most underrated actors there is. He can do action, he can do drama, and he can do comedy, all with ease. I really enjoyed working with him. And Lucy – I was very surprised how wonderful she is. She was very calm. And the chemistry just melded with everybody, so it was a really warm set.