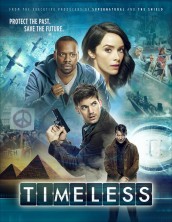 The co-creator/exec producer talks about his new NBC series 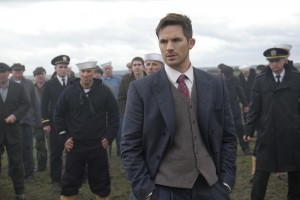 TIMELESS was created by Eric Kripke and Shawn Ryan, who are both executive producers on the series. Kripke, who also created SUPERNATURAL, which is about to launch into its twelfth season on The CW, takes a few moments to talk about his new show.

AX: Were you ever a fan of the Eighties time-travel series VOYAGERS!?

ERIC KRIPKE: I love VOYAGERS!. I never bring it up in meetings, or in interviews, but the truth is, as much as any other influence, my goal walking into this was, let’s make a modern, sophisticated version of VOYAGERS!. I can never bring it up, because no one’s ever seen the show [laughs]. But I still love it, because they go to those different time periods, and the adventures are so fun, and it had a tone that was so swashbuckling, and I really loved that. So to me, it was, the way that in my own way that SUPERNATURAL was sort of a sophisticated antecedent of shows like DUKES OF HAZZARD and KNIGHT RIDER, for me, TIMELESS is that version of VOYAGERS!. I don’t know what happened in the last ten years, where there was this national mandate that time-travel shows had to be completely mind-f***s. I want to go back to when time-travel was actually fun. QUANTUM LEAP was fun. VOYAGERS! was fun. BACK TO THE FUTURE was fun. And we’re really going for that sort of swashbuckling, early Spielberg movie tone.

AX: How do the characters know that the reality we’re living in is not the result of an alteration already made in the timeline?

AX: Are there any time travel genre tropes you are specifically trying to avoid? Do you watch other time travel shows in order not to duplicate what they’re doing?

KRIPKE: We certainly don’t want to be clichéd, just as a general rule. I think it’s a mistake to look at another show for lessons about what you do, because each show is so different, and you just don’t want to limit yourself, you just want to do the best, most grounded, most complicated version of what your show can do, because each show has its own DNA. That said, we’re definitely going to fall into some potholes. It’s inevitable. You can make twenty-two episodes a year, hopefully, knock on wood, with a back-nine pick-up, but you can’t make that many episodes a year without f***ing up. But we have a fun and exciting sense of what we want the show to be, and we’re going to head in that direction.

It’s funny. And it’s me personally, and other show runners might have an entirely different attack – the minute I know that I’m going to make a kind of show, I go into shutdown mode of watching any other type of that genre, because I don’t want to be inspired by them consciously or unconsciously. It’s a no-win game, because either you end up inspired by them, or you end up not wanting to imitate them, and I really put blinders on [regarding] other shows and focus on my own.

AX: But you are still affiliated with SUPERNATURAL, which sometimes deals with time travel. When they get those episodes, do you just say, “Go with God and don’t tell me about it”?

KRIPKE: [Current show runners] Andrew [Dabb] and Bob [Singer] so have SUPERNATURAL well in hand that they don’t need me telling them what episodes to do or not to do.

AX: On the rules of time travel within TIMELESS, since the characters aren’t supposed to be able to cross their own timelines, are you pretty much restricted to 1972 and before because of Garcia Flynn’s age, or does he have better technology and could violate that?

KRIPKE: I think we’re playing Goren as a little younger than that. But yeah, about the latest into the present that certainly Garcia Flynn can go is mid-Seventies. And so far, at least, we’re sticking to that rule.

AX: Now, do we know that there is a timeline that can’t be moved, or could it turn out that there are infinite timelines, and the machine is just moving them from one to the next as they alternate?

KRIPKE: Now you have a sense of the conversations we have in the writers’ room.

AX: How much aspirin do you go through?

KRIPKE: Well, I was going to say, the good news is, [joking] NBC has really provided us with a ton of acid, and it’s been part of the show budget, so it’s really been working [end of joke]. We’ve been playing it as, there’s this multi-verse theory, and infinite versions of history. We’ve actually, in the room, had this conversation, and it’s a shifting process, but for now, we’re really talking about it as a single timeline, because we need there to be stakes. If we f*** up, it f***s up the world we live in, not just, it’s going to change some other multi-verse. It’s going to affect our reality. So we’ve been playing with a version where there’s only one time, and it’s our time, and we’d better not f*** it up.

AX: If TIMELESS gets a back nine episode order, you’ll have almost twice as many episodes as some of these other time-travel shows we see, like 12 MONKEYS or OUTLANDER. You’re doing radically different time periods and locations, essentially creating a whole new landscape with each episode. Can you talk about that?

KRIPKE: Yes. One of the reasons I even wanted to do this show was because this is a show that lends itself to a twenty-two-episode network order. And frankly, in reaction to my last show, REVOLUTION, which should have been a twelve-episode [per season] show – it was so serialized and it was such a blank slate every week – that I wanted my next show, if it was going to be a network show, to have one with a really humming story engine. Because I think that’s the only way you can survive a twenty-two-episode season. And this really does. The fact that there’s a different time period every week in a way makes this a procedural from Mars. You can have a self-enclosed story, you can be fascinated by a particular time period, you can get lost in a story within that time period of both iconic characters and characters from history you’ve never heard of before, and that there’s a mystery somewhere in that historical period that you can unravel. And so it buys you enough story that, every week, we have enough of a structure that we have a jumping-off point instead of just looking at a blank board, because I’m here to tell you that I’ve been in that room that is looking at a blank board, and man, that is daunting. Now, from a production standpoint, it’s brutal. We are taking on an incredibly ambitious show. As Shawn has said, we’ve built Ford’s Theatre, and then we’re going to tear it down. And then we’re building the Copa in the Sands, and then we’re going to tear it down. And then we’re building the friggin’ Alamo, and then we’re going to tear it down. And we’re doing all this in Vancouver.

So what it requires is an amazing production team. It requires us getting scripts done way earlier than we thought we would have to, so that they have enough time to prep them properly, and it’s going to require frankly a lot of tears and stress eating. But we’re really interested in pulling it off, and we think we can.

KRIPKE: Theoretically, in the show rules, they can, but Garcia Flynn is already in a new time period, and then they’re racing to that next time period to deal with him. Because it’s really in effect a chase through time, there isn’t a lot of time to stop and go back and clean up your mess. You have to keep moving forward. It’s really a show about forward momentum.

AX: What would you most like people to know about TIMELESS.

KRIPKE: It’s a big, fun, swashbuckling adventure. And I just hope they have fun watching it.