The actress talks about her new TV series, plus the XENA revival rumors 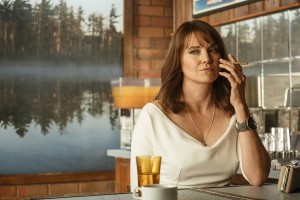 Starz’s new series ASH VS. EVIL DEAD, Saturdays at 9 PM, was renewed for a second season before its first had even premiered two weeks ago. Based on the trilogy of EVIL DEAD theatrical films (1981-1993), ASH VS. EVIL DEAD sees Bruce Campbell returning to his big-screen role as Ash, a none-too-bright fellow who manages to revive and then survive an onslaught of Deadites. Deadites, for those new to the mythos, are hard-to-kill homicidal demons who can possess humans and (usually) inanimate objects.

ASH VS. EVIL DEAD is executive-produced by Sam Raimi, who directed and co-wrote the first three EVIL DEAD movies, Campbell and Robert Tapert, Raimi’s professional partner, who has been an executive producer on all the films so far. Not incidentally, among Raimi and Tapert’s previous TV producing projects is XENA: WARRIOR PRINCESS. Like ASH, XENA was shot in New Zealand.

Lucy Lawless, who starred in XENA (which had Campbell as recurring guest character Autolycus), is one of the leads in ASH VS. EVIL DEAD. Her character Ruby is tough, mysterious and very, very angry at Ash.

Since XENA, Lawless has had major roles in BATTLESTAR GALACTICA, PARKS AND RECREATION, MARVEL’S AGENTS OF SHIELD and SALEM. She previously starred for Starz in three of the four seasons of SPARTACUS, another series produced in the actress’ native New Zealand by Raimi and Tapert (Lawless’ real-life husband).

Addressing the Television Critics Association at a panel Q&A during the summer press tour, Lawless says it wasn’t hard to decide to take the ASH VS. EVIL DEAD gig. “Why wouldn’t I want to be with these guys? It’s the most fun you have on set anywhere in the world. And this guy,” she says, indicating fellow panelist Campbell, “he wanted me around because I laugh at his jokes. I’m not a funny person, but I’m a really good laugher, so that was my calling card with Brucey.”

When the panel ends, Lawless follows up with a conversation with a smaller group of reporters.

ASSIGNMENT X: How would you describe your character Ruby on this show?

LUCY LAWLESS: Oh, she’s a bad bitch. She’s stalking Ash Williams and she’s got a big chip on her shoulder and a hot obsession.

AX: Did you draw on anybody for that?

AX: Does she have the right end of the stick? Is she correct about Ash?

LAWLESS: She’s right. She’s utterly correct. Because he’s responsible for the Deadite plague, he’s responsible to my mind – speaking as the character – for the death of her father, Professor Knowby, back in the EVIL DEAD movies. He was the holder of the Necronomicon. So she’s got an ancient chip on her shoulder.

AX: Have you and Bruce Campbell learned anything from working with each other?

LAWLESS: Rob got me to talk to Bruce before I even played Xena to learn how to be a well-behaved star. And I really did learn that from Bruce, because when they would say, “Lucy, do you want to go do your fights?”, my answer was, “No, I don’t want to go do a fight, I hate fighting, another fight, are you kidding me?” And Bruce taught me to go, “Excellent! I’d love to!” Just saying it, even though you’re not feeling that at all.

AX: ASH VS. EVIL DEAD can be very gory. How do you feel about the blood?

LAWLESS: It never touches me. Not a single drop.

AX: There’s been some discussion of a XENA TV reboot happening. XENA premiered originally in 1995. Do you think it could work if it was introduced, or re-introduced, today?

LAWLESS: There had not been a mythological show on television for about two million years. So the ground was ripe for exploiting that world. Now, how do you make it appointment television, given the way that people watch things? The audience is all over cable. It’s spread out in a way that’s much harder to catch. I think friendship is what people want. People still want that core friendship [between Xena and her best friend Gabrielle, played by Renee O’Connor], and I think whenever they reboot it, they have to get two women who really like and respect, have a strong chemistry, to carry the mantle, because in whatever world you’re setting it in, I think that friendship might be what they want, the power of friendship.

AX: Would you be involved with the reboot?

LAWLESS: I don’t know. See, that was news to me. If they are rebooting it, we’re not involved at this point. There was a conversation a year ago that Rob was involved with, but that didn’t happen.

AX: You have a large group of very loyal fans from XENA. How do you feel about that?

LAWLESS: I love them and I’m really grateful for all the affection and fidelity they’ve shown me and this show. I try to show it back, but I would never bulls*** them, I would never lie to them and get their hopes up unnecessarily. I would love this [reboot] to happen, and if there was a way – what I’m sensing the issue is, I know that Rob can’t figure out a way to make it appointment television, given everything else that’s on television at the moment, given GAME OF THRONES. It’s not fertile ground for planting a seed right at the moment, but I would like all the people who are in a position to, all the creators, to think about the strength of that [Xena/Gabrielle] friendship, which was what had a resonance with all those people

AX: Would you want to return to playing Xena?

LAWLESS: In a [weekly] TV show? I couldn’t do it. I mean, I really couldn’t live that stunting. I look back, and I’ve got all sorts of wear and tear from that lifestyle, because that’s just what happens to human bodies when they get used a certain way a lot. So I actually couldn’t do it, I’m pretty certain. There’s somebody great out there. However, I would love to do a reboot of getting Xena, Gabrielle, Autolycus and Joxer [played by Ted Raimi] back together again, that crew back together to solve some ridiculous problem, [in a telefilm] or a movie. But limited.

AX: How much action are you doing on ASH VS. EVIL DEAD?

AX: You recently had a reunion with Renee O’Connor …

AX: What would you most like people to know about ASH VS. EVIL DEAD?

LAWLESS: What would I want people to know? That this is too much fun. It’s bloody, it’s nasty, it’s incredibly distasteful, and it’s really funny. So you heard it here.