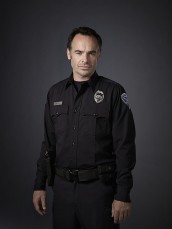 The actor talks Quentin Lance and his new documentary 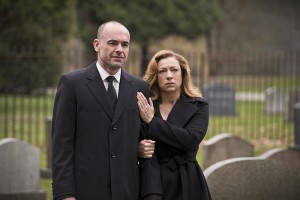 On ARROW, now in its fourth season Wednesdays at 8 PM on the CW, Paul Blackthorne’s character Quentin Lance has been a police detective, a police captain, demoted, reinstated, alcoholic, sober, fighting against the vigilante hero, aka Oliver Queen (Stephen Amell), allied with him, and at various points in between.

Blackthorne, who played supernatural private detective Harry Dresden in Syfy’s THE DRESDEN FILES, is also a documentary filmmaker when he’s not acting. The Englishman talks about both careers here. Note: This interview was conducted before the airing of the episode “Eleven-Fifty-Nine.”

AX: What is happening with Quentin Lance when Season 4 begins?

PAUL BLACKTHORNE: Well, he’s alive, so that’s the main thing. He’s off the bottle, not drinking, he’s reconciled his relationship with his older daughter [Laurel Lance, played by Katie Cassidy], but of course, Starling City’s in a complete mess, and it seems like his younger, seemingly dead daughter [Sara, played by Caity Lotz] is on her way back to life. So it’s a strange time at the office.

AX: Are you still enjoying playing a cop four years into the job?

AX: And what points of Lance’s evolution have you enjoyed the most? Apart from not being dead, of course.

BLACKTHORNE: I think the ongoing relationship with the daughters, the ongoing shifting relationship with Oliver Queen, with the Arrow, and often having to push his own principles to one side for the greater good, and the sort of neurosis that brings about in his mind, because the things that affect him are his daughters and the city. And sometimes he has to do things very much against his own grain in order to fulfill his desire to see those two, the daughters and the city, are okay. So that’s interesting, playing out all that neurosis and conflict within his own mind.

I liked, obviously, when it became known about Sara’s death, it’s all kind of tragic stuff, and having a breakup scene with Laurel at the cemetery. That was kind of heartbreaking.

AX: And what’s going on with your documentary, THIS AMERICAN JOURNEY?

BLACKTHORNE: My documentary has been released. What I am working on now is a documentary called WOMEN WITH BALLS, which is about ladies playing American football in the National Alliance of America. Our ladies just won the [2015] Women’s Super Bowl, so I’m producing that, and of course my “Poach Eggs, Not Elephants” t-shirt campaign is kicking off this week, we just kicked it off yesterday, raising money for the Air Shepherd, which is helping the elephant situation down there in Africa. If they carry on killing them at the rate they’re at at the moment, ninety-six a day, one every fifteen minutes, they’ll be extinct in eleven years.

AX: How did you get interested in that subject?

BLACKTHORNE: That’s a good question, because to be honest, I have no great affinity with American football. What this film’s about [is] the sisterhood of these women, what they do for each other, they play for nothing, they don’t get paid, and just what they do for each other, within their team, within the community. It’s a real microcosm of America. So it’s a great sisterhood. We’re exploring all sides of it.

The team is called the D.C. Divas, and they’re based on the East Coast,. They won the Super Bowl, which was in Los Angeles, and we’ve been following them all season, and yeah, we got the big Hollywood ending So it’s great.

This interview was conducted at the CBS/CW/Showtime party for the Television Critics Association press tour in Los Angeles, California.